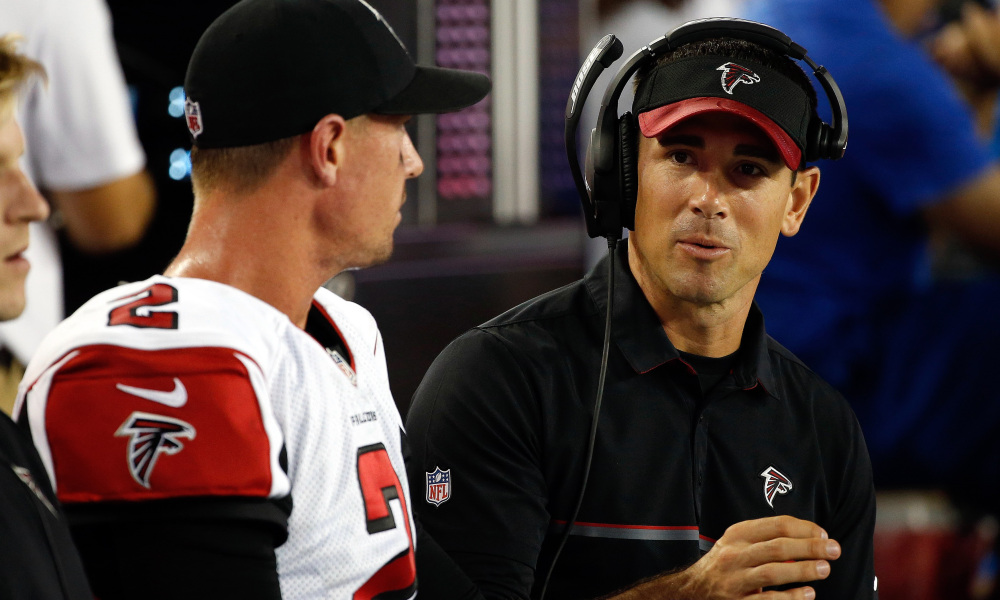 The Los Angeles Rams has hired Matt LaFleur as their new Offensive Coordinator from the Atlanta Falcons. The hire comes days after the Falcons loses Super Bowl LVI to the New England Patriots last Sunday in overtime 34-28.

LaFleur served as the quarterback coach of the Falcons in which he was responsible for starting quarterback Matt Ryan to become not only the Offensive Player of the Year, but the NFL MVP of the league too! Unfortunately, Ryan failed to the statistics of the NFL MVP teams loses the Super Bowl game of that same season.

It had been rumored that LaFleur was interested in a move to Los Angeles that would reunite him with Los Angeles Rams head coach Sean McVay, whom he worked with on the Washington Redskins coaching staff

Coach McVay believes that LaFleur can offer beneficial support with developing the Rams 2016 first-overall pick Jared Goff at quarterback position. Many were expecting that the Falcons were going to promote LaFleur to the offensive coordinators position that was vacated by new San Francisco 49ers head coach Kyle Shanahan. However, news broke that the Falcons had just hired Steve Sarkisian to be their new offensive coordinator.

LaFleur’s coaching career began at his alma mater, Saginaw Valley State, in 2003 where he served as an offensive graduate assistant, and was a substitute teaching math at the local high schools. He was hired at Central Michigan University where, from 2004–2005, he assisted the offensive staff. In 2006, he coached quarterbacks and receivers at Northern Michigan University. In 2007, LaFleur last year at the collegiate level, he was the offensive coordinator at Ashland University. In 2008, LaFleur was hired by the Houston Texans to serve as an offensive assistant. He assisted both wide receivers and quarterbacks during his two year stint there and developed a close relationship with coordinator Kyle Shanahan. When Shanahan’s father Mike was hired by the Redskins, Kyle brought LaFleur to Washington to coach the quarterbacks. A primary responsibility of LaFleur’s for the 2012 season was to mentor then rookie quarterbacks Kirk Cousins and Robert Griffin III.

Prior to joining the Falcons staff in 2015, LaFleur was the quarterbacks coach for the Washington Redskins from 2010-2013, and in 2014 he returned to the collegiate level and held the same position for the Fighting Irish of Notre Dame.

McVay has chosen a offensive coordinator that not only he groomed in Washington but how he has been able to turn a good Matt Ryan to a great league most valuable player. Like myself, many feels that the Rams organization has landed another quality coach on the offensive side of the ball, given a opportunity to create a offense that will flourish young quarterback Jared Goff, and excitement for Todd Gurley.