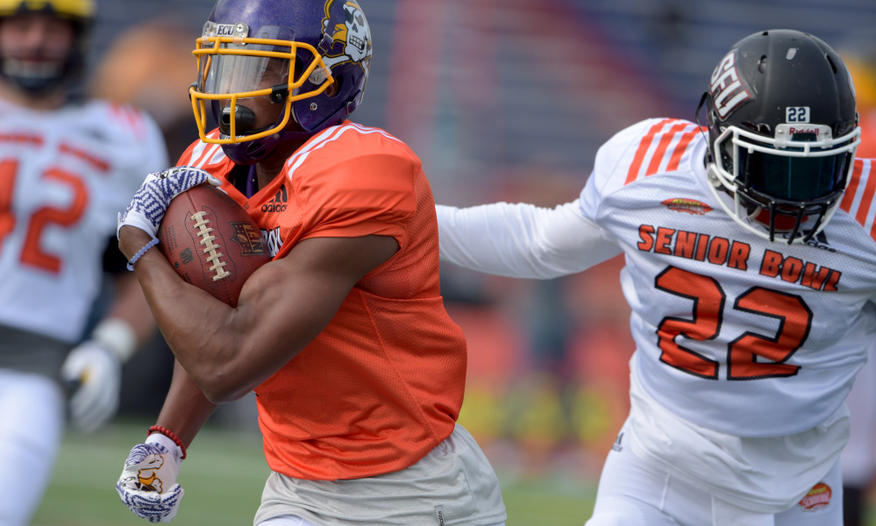 Ok so the college all star games are over and some guys really made a name for themselves and moved up draft boards. That said, my mock draft has changed dramatically with only 3 players I projected to the Rams in Mock 1.0 still in my draft. Remember Rams are projected to have 3rd round, 4th round and 6th round compensatories so we have 8 picks total. A lot of damage can be done:

Rams need secondary help almost as much if not more than WR help so I go grab the best CB left on the board at #37. Tankersley did not play much is Freshman or Sophomore years, but in his last 2 years he had 9 interceptions and 100 tackles. The 6’1″ 200 lb Tankersley is able to run with the speedy WR and get up and out jump the taller WR.

Rams DO need a WR out of this draft even if they do sign a free agent or two (cough cough Desean Jackson cough cough Josh Gordon) and this kid REALLY made a name for himself in the Senior Bowl and his stock is on the rise. But he only had 1 catch in the game you say? Yes that is what the stat sheet says. What it does not say is he caught 2 touchdowns of over 30 yards both brought back by holding penalties. He finished his career with 399 catches for 4279 yards and 23 TD. He will immediately make an impact, why not in a Rams uniform.

The Rams defensive front 4 has been a strength for the last 4 or 5 years but guys like Robert Quinn and William Hayes are getting up there in years so we use a mid round pick to bolster the line with the sturdy Kpassagnon. At 6’7  and 290 pounds, Big K finished his career with 51 tackles, 4 forced fumbles and 12 sacks.

Granted Pumphrey is somewhere size wise between Tavon Austin and Benny Cunningham, but he will be a perfect compliment to Todd Gurley. This speedster is tough AND can catch out of the backfield and he showed it at the Senior Bowl. Oh by the way, he left SDSU as the leading rusher in NCAA history. So in horns he shall be

Rams need a bulldozer to open holes for Gurley (and Pumphrey) and this 5’11” 220 pounder was  the best true FB in college football last year.

My hope is the Rams spend some Free Agent money on some veteran offensive lineman to raise the average age and experience on the line. But we still need depth and this big hoss will give you that. 4 year starter at UGA played both RG and C.

Depth for the LB corps with a possible base defense change. Strong but fast and a nose for the ball. Dad Hardy Sr. was one of the best ever so the Rams go bloodline here.