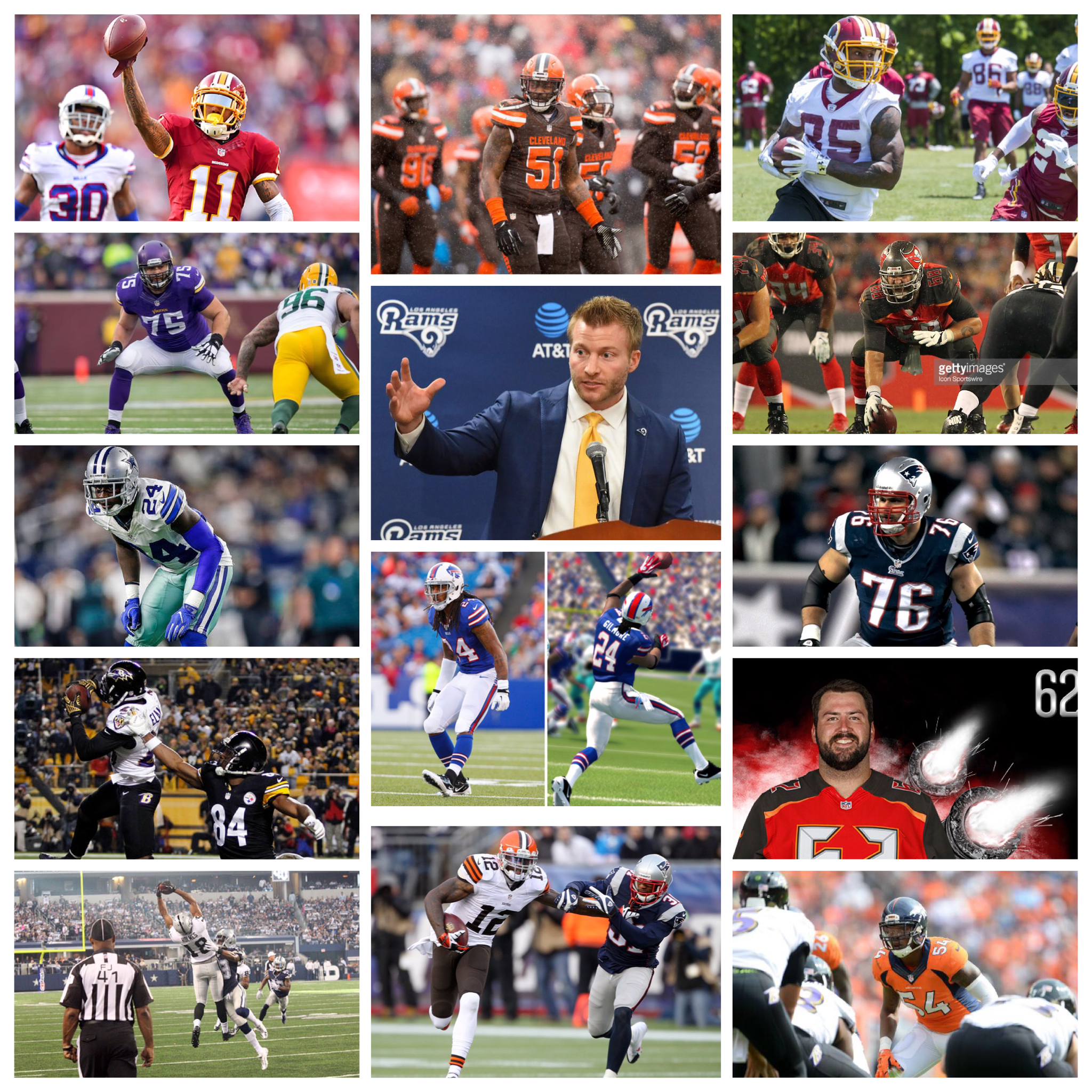 The Los Angeles Rams new head coach Sean McVay, Chief Operating Officer Kevin Demoff, and General Manager Les Snead, called for a mandatory team meeting to address the expectations and the needs for the up-becoming 2017 football season. The meeting was to discuss the direction the organization were moving and were requesting for players to voluntarily restructure their contracts.

Going into the offseason the Rams is $44,116,822 under the salary cap to sign free agents and rookies from the 2017 NFL draft. These restructures will assist with the Ram’s with resigning cornerback Trumaine Johnson to a new long term deal. The restructures also will help attract marquee free agents to the city Los Angeles. All players were informed that each of them will be called in individually to discuss the terms of their current deals. The Rams will be making a complete overhaul of their current roster because no roster spot were safe or secured.

Coach McVay summoned for left tackle Greg Robinson and left guard Roger Saffold first to discuss their futures with the Rams organization. Robinson is due $6 million this season, and McVay addressed that his play was so subpar, that the front office were in efforts to try and trade him or release outright. However, McVay had expressed he was concerned because he was talented but still a bit raw and wasn’t ready to lose him to another organization. McVay also expressed his interest with Saffold and advised him that the Rams were in efforts to release him unless restructuring his current deal was in his best interest. However, Robinson would be given a ultimatum if he wanted to remain as a Ram as well, restructuring his rookie deal and transitioning into a offensive guard would be the best in his interest too. Both players were advised to contact their agents and let the team know what their decisions were moving forward. Both Robinson and Saffold contacted their agents and each submitting for restructures of their current contracts, saving the team $3.2 million toward the cap.

McVay would call in tight-end Lance Kendricks in regards to his future with the team. Kendricks conversation would be similar to Robinson because of his inconsistency and crucial drops in game pivotal situations. Kendrick indeed would submit to restructure of his contract saving $1,484,950 million dollars toward the cap.

Veteran receiver Tavon Austin and Punter Johnny Hekker was next on the list, both players submitted their agreements of restructure and wish the coach well with the remaining eligible players saving the team with $3.2 toward the cap.

For the next venture, McVay would have the defensive linemen whom recently locked in with new deals except Aaron Donald. Donald, Michael Brockers, Eugene Sims, William Hayes, and Robert Quinn all agreeing in restructures, saving the team $6.6 million toward the cap.

After meeting with all players McVay would inform Quarterback Case Keenum, Safety T.J. McDonald, Running back Bennie Cunningham, wide-receiver Brian Quick, Center Tim Barnes, defensive linemen Cam Thomas and Dominiquue Easily that the organization were going in another direction and was not in agreement to resigning them to new deals.

Rams necessary moves via trade and releasing of players, increased the Rams salary cap to $54,360,050 under the cap. With all current roster players agreeing to restructure their deals, the Rams salary cap space was at a astounding amount of $74,741,728. The Rams are now in great shape to seek out and sign top free agent players to address the teams needs.

The free agent signing period has started, and the Rams needs were to find a new center, offensive lineman (both tackle positions), defensive backs (corners and safeties), and linebacker. Via a trade, the Tampa Buccaneers acquires the Rams 2015 second round draft pick T Rob Havenstein for C/G Evan Dietrich-Smith and cash. Via trade, the Denver Broncos acquires TE Corey Harkey for LB Brandon Marshall and seventh round conditional pick.

On the first day of free agency, the Rams strikes a deal with Cleveland Browns linebacker Jamie Collins Sr., with a five year $49,946,839, earning $9,989,368 per season. The Rams addresses another defensive need later that day in free agency by agreeing with free agent corner from the Buffalo Bills Stephon Gilmore with a five year $60,261,739 deal, earning him $12,052,348 per season.

Rams have now struck deals with two top caliber defensive players, but, yet to have address contract talks without their own current UFA cornerback Trumaine Johnson. The negotiations starts to heat up with the Rams after reaching a lucrative deal with Gilmore, as Johnson remained a free agent. The Rams were contemplating on whether or not to place the franchise tag on Johnson for the second consecutive season. Talks intensify but the Rams and Johnson finally agrees to sign him to a new deal. Johnson agrees to a four year deal worth $56,660,607 earning him $14,165,162 per season, making him the highest paid defensive back in the league.

Concentrating on the offensive side the ball the Rams will sign two veteran tackles to compliment the versatile C/G Evan Dietrich-Smith to provide a pocket presence for their starting quarterback Jared Goff.

Rams agree to a deal with UFA LT Matt Kalil on a one year proven deal of $2,750,000 with incentive clauses added. Rams will also agree with UFA RT Sebastian Vollmer also with a one year proven deal of $1,175,000 with incentive clauses. Both of these players missed almost the entire 2016 season with injuries. Kalil was in his last season with the Minnesota Vikings of a $11,000,000 guaranteed contract, and Vollmer was place on injured reserves after season ending injuries. Both injuries had considered to be career threatening, but the Rams get two steals with these players. Kalil will return home to California and play on the very home field that he played in college allowing him to be a top first round draft pick.

However, the Rams wouldn’t stop there in adding receiving depth and added another weapon. Troubled WR Josh Gordon, had agreed to join the Rams with a two year $1,900,000 deal, earning him $950,000 per season contract. However Gordon’s contract is a low-risk one, his base salary of only $650,000, plus a roster bonus of $300,000 due at the start of training camp. Rams have an immediate upgrade at the receiver position, and if Gordon can stay clean and out of trouble, he can have a season like 2013 where he destroyed defenses.

Rams found a replacement at the center position after waiving Tim Barnes. Agreeing to return home to California (Bakersfield), is free agent center from Tampa Bay Buccaneers Joe Hawley. Hawley agreed to a three year $10,000,000 deal earning him $3,333,333 per season. Hawley has been solid at that center position with the Buccaneers the last two season added a more veteran presence and pass protection for Jared Goff.

Wade Phillips success in running a 3-4 scheme needs to add depth at the defensive backfield. The Rams would add two players whom both would be looking for redemption in the league. Morris Claiborne, who the Rams organization knows all so well, agreed to a three year $11,082,000 deal earning him $3,360,666 per season. The Dallas Cowboys swapped picks in 2012 NFL Draft with the Rams to select Claiborne sixth overall in that draft. Rams also remembers him after having a 28-0 lead against the Cowboys, the Cowboys would rally to take a late 34-31 lead. Rams quarterback Austin Davis would overthrow Brian Quick and Claiborne would intercept the intended pass to secure the Cowboys victory.

Looking for redemptions to a dismal career also is safety Matt Elam, who agreed with the Rams with a one year prove it deal of $2,140,997. Elam is a safety who can cover like a corner, who can play slot receivers or tight ends. He missed the entire 2016 season with an torn bicep and the Baltimore Ravens reported that they would not pick up his option. He was benched twice for missing too many tackles. Playing under a defense of Wade Phillips, Elam will be able to correct that problem and be a upgrade in the secondary for the Rams. Elam will replace TJ McDonald who the Rams decided not to bring back.

Rams continue to shop the free agency market, they would add an contingency plan at the wide receiver spot, in efforts that Josh Gordon didn’t work out. 6’4” Andre Roberts of the Oakland Raiders has agreed to a two year $5,000,000 deal earning him $2,500,000 per season. Roberts is a huge red zone target and also can stretch the field vertically. Roberts could have started for 75% of the teams in the NFL. Rams were expected to resign Kenny Britt to a deal but the market price was six million dollars. Rams wanted to offer Britt a three year deal $22,000,000 but Britt was firm with nothing less than four years. Both sides would reach disagreement allowing Britt to sign with another team.

The Rams would also report that they reach agreement with RFA defensive line Ethan Westbrook, bring him back with a one year deal of $1,750,000. It was reported that the Dallas Cowboys signed him to a tender in which the Rams would match. Westbrook is due for a big payday soon, but the Rams made sure they secured him for one more season as a Ram.

Rams would only resign ERFA defensive Blake Countess to the league minimum of $450,000.

The Rams were very aggressive in the free agency period and sign a lot of quality players to help bring this team back to a winning organization. Addressing both sides of the ball with quality free agents, makes this team as playoff contenders. With a quality offensive line, the depleted run game from a season ago already looks likes it ready for running back Todd Gurley.

Overall, the Los Angeles Rams made a big splash in free agency signings. A strategy of aggresive negotiations allowed to sign key players. The team will enter the NFL Draft with less than $20,000,000 of cap space, and will select wisely. It is my opinion that they should use a second and third to move up in the first round to draft a defensive lineman to replace Easily and Thomas