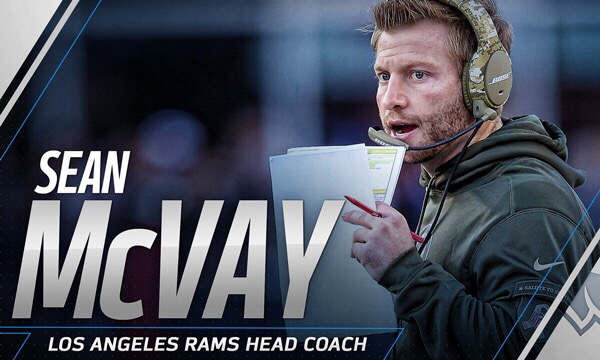 The coaching search for the Los Angeles Rams head coach has ended with the Rams hiring Sean McVay as the new head coach.  McVay who will turn 31 in a couple of weeks is now the youngest ever to hold the position of head coach.

McVay was responsible for turning around not only the offense with Washington Redskins, but also in veteran quarterback Kirk Cousins. Cousins had two very impressive seasons the last two seasons under McVay as the Offensive Coordinator.

McVay is the grandson of former head coach of the New York Giants and San Franciso 49ers Executive John McVay who was responsible for the success and run of the 49ers in the 80’s.

The Rams are getting a former high school quarterback as their new head coach who is very creative with the football.  McVay will be looking to develop Jared Goff into the QB the franchise envisioned when they drafted him no.1 overall last year.

The hiring of McVay has silenced all the complaints and frustration of the Los Angeles fans on the news that broke early this morning the San Diego Chargers would be relocating to Los Angeles and play their home games at the Stub Hub Center in Carson, CA.

Rams fans get ready for a great season under this offensive minded coach who will air the ball often opening gaping holes for Todd Gurley with the run.