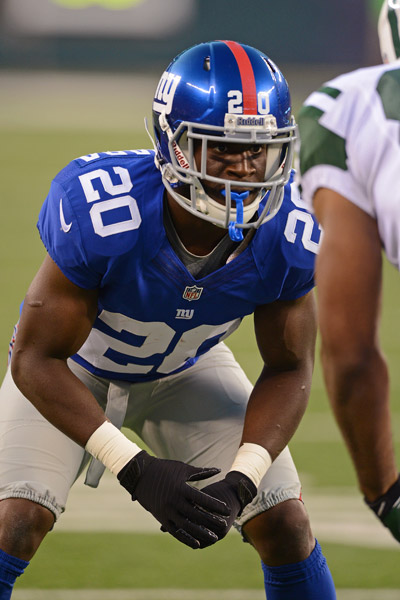 The Los Angeles Rams are in need of depth and experience at the cornerback position to help solidify a top core defense. However, they will be playing under a new defensive coordinator after former coordinator Gregg Williams agreed on the same position with the Cleveland Browns.

Earlier I wrote that the Rams should sign Stefon Gilmore as a compliment to Trumaine Johnson on the other corner position. For added depth, or even for a contingency plan, Prince Amukamara should be considered in the Rams plans.

Prince Amukamara was selected 19th overall by the New York Giants in the 2011 NFL Draft.  Unfortunately on day after signing with the Giants, he was sidelined indefinitely when he broke the metatarsal bone on his left foot.

Almost with the same traits as Gilmore, Amukamara is a big and physical cornerback who stands 6’0”tall and weighing at 206lbs, and ran the 40 yard dash at the NFL Combine with an exceptional time of 4.43 seconds. His size opposed nightmares for top elite receivers in the league. His best seasons he had three interceptions, 14 pass deflections, and a career high in tackles with 76 tackles.

Amukamara spent his first five seasons with the New York Giants, and he became indispensable when the Giants signed former Rams cornerback Janoris Jenkins. At 26 years of age, Amukamara, didn’t get the multi-year deal that he had expected, because of his inability to consistently remain on the field, teams stayed away. He missed 25 games over his five-year career with the Giants. Therefore he was signed a one year deal with the Jacksonville Jaguars $6 million dollars.

If the Rams can seem to get Amukamara to sign a one year prove it deal, and overcome the injuries and remain healthy, Rams may can provide even more depth at the corner position.

Contingency plan or not, Rams have another opportunity to bring in another free agent veteran with Super Bowl experience. Amukamara won a ring his rookie season with the Giants after they defeated the New England Patriots in Super Bowl XLVI. He also came up with his first NFL career interception off Vince Young of the Philadelphia Eagles.