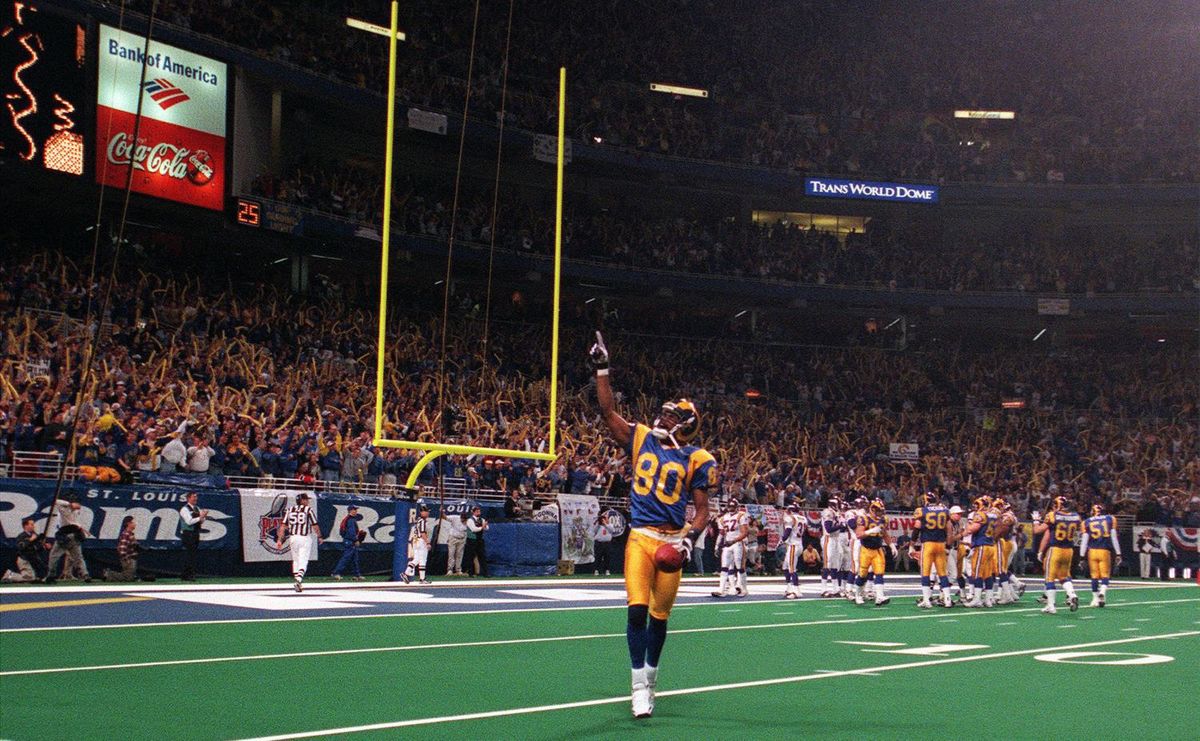 What if I told you that pro football writers don’t think a man with 15,208 receiving yards, 91 touchdowns and 1,024 receptions is a Hall of Famer? For Isaac Bruce that’s the reality of the situation as he stares at a dwindling chance to get into Canton.

Reverend Ike is the most underrated receiver of all time, period. Am I a die-hard Rams fan, that could be considered a “homer” for saying such things? Yes, but the fact of the matter is that I have a take and I am going to explain to you why not only is Isaac Bruce HOF worthy, but he’s the most underrated for his position.

When arguing for Bruce, many fail to mention or even realize the fact that Bruce had a ridiculous 1,781 yards receiving in which at one point during the year he was the all-time single season receiver in yards in only his second season. That however, was before Jerry Rice played his game in the 1995-96 season. I was born during this year, so I didn’t have the privilege to watch this magnificent and unprecedented season in person, but right there lies the problem. I seem to appreciate it more than the people who were able to watch it do. Besides the fact Bruce had 1,781 yards — which is still the fifth most in a single season ever. You also need to bear in mind he did that before the Greatest Show on Turf was ever thought of. He achieved that feat with Chris Miller and Mark Rypien as his QB’s no less while Jerry Rice had Steve Young for the majority of the year.

Anyway, it would be downright insane to base such a take off of one season though, so let us dive into the career of Bruce.

He’s 30th all-time in all-purpose yards, he led the 1996 season in yards, 13th all-time in career receptions, 26th all-time in touchdowns, fourth all-time in receiving yards. With all that aside this player never received first-team All-Pro honors and only was invited to the Pro Bowl four times out of his 16 seasons in the NFL. That means he had four more seasons he had 1,000-plus yards than he had Pro Bowl appearances. Bruce has always been overlooked, but it’s just gotten worse over time. Here’s a look at similar players that are considered more deserving than Bruce by writers.

Here’s a little thing to keep in mind with Owens. Bruce doesn’t have anywhere near the amount of touchdowns because he had Torry Holt and Marshall Faulk taking away the pieces of the pie. Had Bruce been the only guy like Owens, Bruce would have had the same amount of touchdowns, but way more yards.

Bruce is quite possibly one of the greatest route runners of all time, he wasn’t quite the jump ball guy Torry Holt was, but he could make you pay in the open field. Don’t believe me? Just go back and watch the Super Bowl he helped win versus the Tennessee Titans. Obviously, I am not hating on Holt, I love my Rams. I just feel as though people are unfairly penalizing Bruce because he had Holt. It seems stupid to me to say the least. There are analysts out there that don’t think Bruce belongs in the Hall because Holt had the “superior career”.

Perhaps it’s time to stop shaming Bruce when he is arguably more deserving than three WR’s in the Hall of Fame right now: Michael Irvin, Tim Brown and Andre Reed. Don’t believe me? Here are their stats:

It’s kind of sad to be quite honest that Andre Reed went to seven Pro Bowls and Bruce only went to four when Reed only had four 1,000 yard-plus seasons to Bruce’s eight. Reed also went to a Pro Bowl in a year he had only 854 yards receiving when Bruce was snubbed from the Pro Bowl in a year he had 1,781 yards receiving. At least Tim Brown is arguable, if you are a person that believes that Reed belongs in the HOF and Bruce doesn’t you have no idea what you are talking about. If you think Michael Irvin deserves to be in over Bruce you are just wrong. Irvin was very good, but in one less year Torry Holt had better stats. Clearly Irvin’s vote for Canton was all about “America’s team” . Irvin finished his career with seven 1,000-plus yard seasons, one less than Bruce and yet he had one more ro Bowl and a First-Team All-Pro selection.

See? There are definitely things to think about with Bruce. He may not be the absolute flashy diva prima donna that T.O. was, but Bruce did everything he needed to do to help the Rams win football games. It’s not like the Greatest Show on Turf lasted his whole career or anything either. That dynamic offensive era only arguably lasted from just 1999-2003. Bruce, regardless of how bad the Rams ended up getting later in his career, was still able to put up decent numbers until he turned 37 years old.

In conclusion Bruce has not only done enough for a call to Canton, but he has done enough and has been disrespected enough you can call him the most underrated WR of all time. Bruce deserves to be enshrined in Canton with Kurt Warner no matter what anyone thinks he has earned that right.

Kevin Demoff: "I don't see (college coaches) as being an active part of our search."