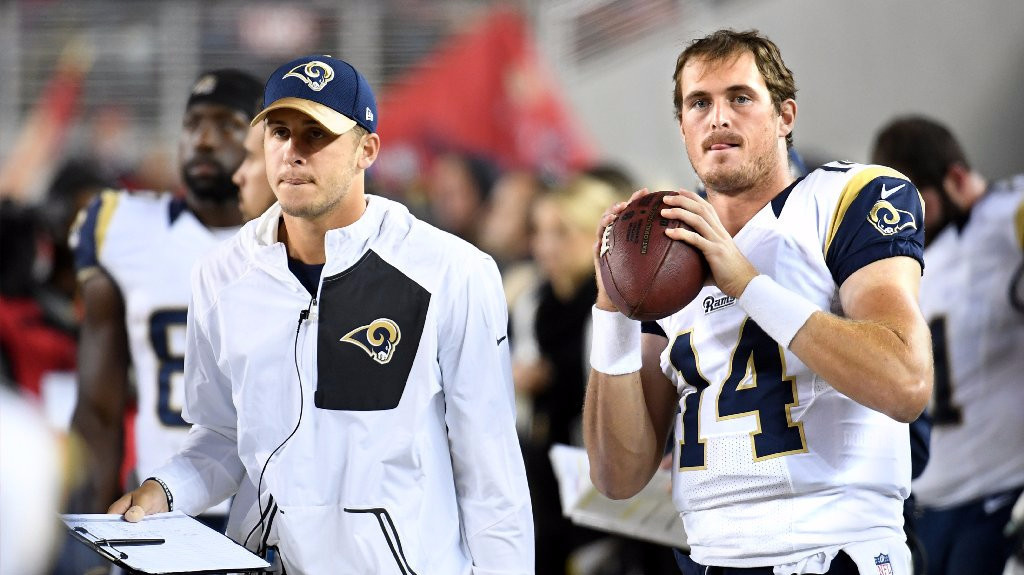 The 2016 season is coming to a close for the Los Angeles Rams after a very disappointing campaign. With the Head Coach and likely the General Manager out, there doesn’t leave too many in the front office that are responsible for the move for rookie QB Jared Goff. Could there be a controversy in the future?

Well, before you laugh and say the Rams aren’t trading Goff, realize this. Robert Griffin III went from Rookie of the Year to after thought for fellow 2012 QB draft pick Kirk Cousins. Now, what was Cousins? He was insurance for RG3. That ended up being a bold and brilliant move by the Washington Redskins. What is the Rams backup QB Sean Mannion? Insurance for Goff.

It didn’t start out that way, or at least we hope it didn’t start out that way. The fact of the matter is this, the front office made a horrible decision to draft Mannion in the third round and not even bother making him a starting QB. Instead they would rather have Nick Foles, a one-year wonder who has proven to be average at best in the NFL and Case Keenum, a no-year wonder who is slightly better than Foles if even.

Mannion shouldn’t be written off by the Rams or the Rams fans. This guy is the PAC-12 all-time leader in passing yards. It also wasn’t long ago when he was drafted in 2015 that Chris Mortenson said this…

I am not anti-Jared Goff, as a matter of fact I like him a lot. However, there is an obvious reason to believe that Snead and Fisher threw caution to the wind with the trade up for Goff and drafted him to buy them more time with building this team. To be quite honest was it really that unpredictable? I mean Rivers McCown of Bleacher Report predicted Mannion’s future as a rapid reaction to the draft pick in 2015.

“The most likely scenario—unless Mannion becomes some sort of Manning-esque mastermind at pre-snap reads—is that Fisher gets one look at what he has this season and then drops him quickly to find a better solution. The paradox is that in picking Mannion, Fisher and general manager Les Snead have proved that they aren’t the right combo to trust to find that solution.”

Mannion had shown some promise at Oregon State as a prospect. He was considered a solid QB, with timing and anticipation. Mannion played in a Pro-style offense, unlike Goff and developed patience, feel and accuracy and solid ball placement. He also showed the ability to proceed through three, five and seven step dropbacks and make multiple reads. Is big issue was improvisation at the next level, what would he be able to do if put in a high pressure situation? The issue is that Mannion needs to be in a system that has order and has a playcaller that knows exactly what they are doing. Not saying Mannion got any chance to show anything, but in Rob Boras’ offense it would have been an absolute disaster.

Mannion started to gain some fan support before 2016 started. His performance in the first pre-season game versus the Dallas Cowboys. He was playing against third-string players and did throw an interception. However, he was exciting and he got the return to Los Angeles on the right foot throwing touchdowns to RB’s Aaron Green, Chase Reynolds and a game winning touchdown to WR Nelson Spruce. After that Mannion didn’t even get into the next pre-season game and then he was forced to play behind an awful third-string offensive line in which he was sacked eight times in the last two games.

On the Monday Night football debacle to open the season, commentator Steve Young on ESPN had said that Sean Mannion looked like the best QB in camp per multiple reports. Mannion despite such a frustrating situation this season has maintained his composure and just continued to work hard.

The Rams finished their last day of practice on the season, guess who was the last one on the practice field?

It’s not to say because Mannion stays on the field the longest he’s deserving of reps, but you would like to see your future franchise QB out there at the end of the day like a Peyton Manning/Tom Brady type of player would do. Mannion isn’t just some veteran, this was his second year and he’s only thrown the ball seven times during a regular season game in his career. Clearly Fisher and Snead have wasted Mannion.

Now that it’s likely going to be a new regime in Los Angeles, there won’t be favoritism. Yes, Goff will be treated as a first overall pick, but there shouldn’t be a bias against playing Mannion if he’s clearly the better QB. Cousins took over for RG3 and now is the face of the franchise (as long as they are able to extend his contract). What if by some miracle the next regime prefers Mannion over Goff. It’s certainly possible.

What is also possible is the idea of Sean Mannion leaving the Rams in some way and making them regret it. Just imagine a team like San Francisco who has no future at the signal-caller position or even the Arizona Cardinals who are clinging on to Carson Palmer’s 37-year old arm, deciding to bring in Mannion and finding that he was in fact a diamond in the rough that was just hidden away by the guilt of Fisher and Snead.

If Mannion is in fact that guy, we won’t know unless the Rams let him play or he leaves and goes to another team. Obviously, with the amount of stock poured into young Goff, you want him to succeed, but if Mannion ends up becoming a franchise QB for another team and Goff ends up having an average or worst career, this will be one of the worst decisions in franchise history.