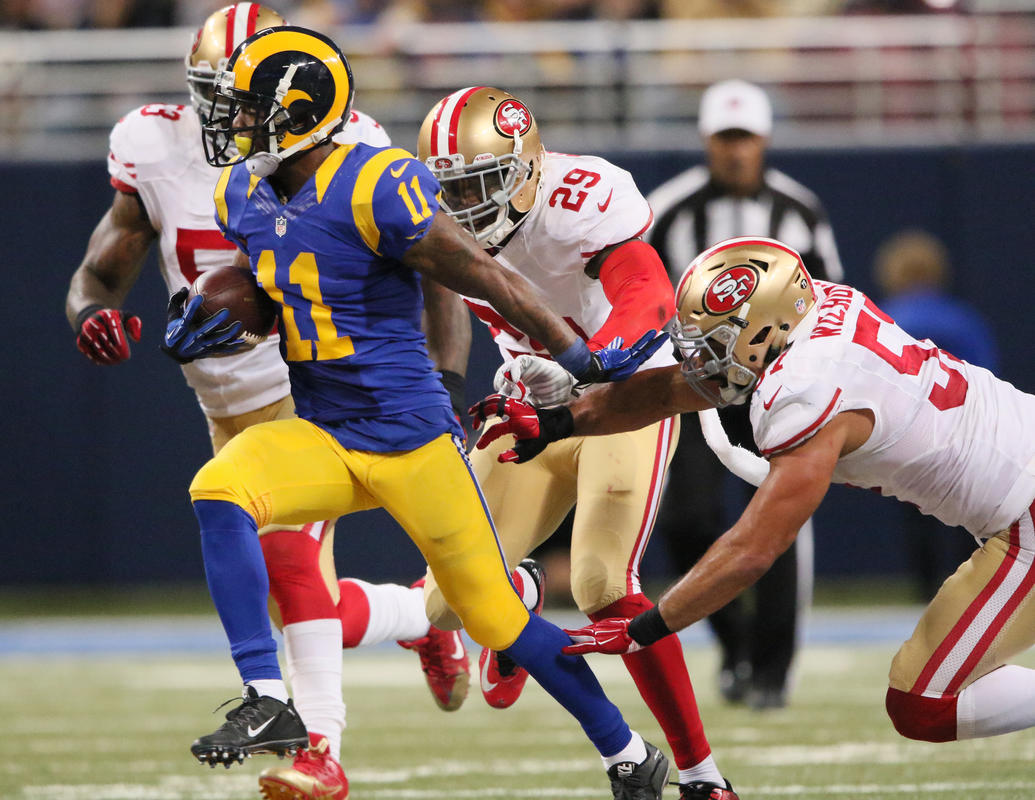 As a starting point, we’ll take a look at each position and figure out which players will be back in 2017. Here we’ll look at the wide receivers. In case you missed our previous positions, you can check them out by clicking the links below.

Britt became the first Rams receiver since Torry Holt to have over 1,000 yards receiving in a single season. He’s still under 30 years old, but because of that he could demand a lot of money in free agency. Money that he’s simply not worth. Britt is a number one receiver on the Rams, but on most football teams, he would be a number two.

Given that his contract is up and it will be a new coach coming in, they may want to bring in their own guys. As disappointing as it’s going to be to see Britt go, the probability of him coming back is slim.

Over the offseason, Austin signed a big contract and to say the least he has disappointed. While Austin has career highs in catches and yards, Austin needs to be more than just a receiver to be effective.

He’s a versatile threat and this season he just hasn’t been one. He has half as many rushes as he had last year, has least amount of rushing yards since his rookie season, and when it comes to punt returns, if he doesnt score against the Cardinals it will be the first time in his career that he won’t have a returning touchdown.

Austin isn’t a true receiver as much as the Rams tried to make him one this season. He is nothing more than a Percy Harvin and this is a team that needs a lot more from the wide receiver position. If it was up to me, Austin would be gone via trade as they can’t cut him with the cap penalty that would take on, however, he will be back for at least one more year. In 2o18, the Rams can cut him and save $8-million by doing so.

We haven’t gotten to see a lot what Cooper can do. He’s very similar to Tavon Austin, but he can play on the outside if he’s asked to. He has the big play ability, he just hasn’t gotten the opportunities.

The rookie receiver has 10 receptions for 70 yards and of those 10 receptions, four of them have gone for first downs. Cooper is intriguing and for that alone he’s worth having the next regime see what they have in him.

For one of the very few times in his career, Brian Quick did impress this season. He caught the team’s very first touchdown of the season and continued to make plays. Unfortunately, they were few and far between.

Quick had career highs in nearly every statistical category, however, a lot of that is because he saw the field more than he has in his career as well. He continues to disappoint and continues to have mental blocks and give selective effort. It’s the Brian Quicks on the team that need to go in order to change the Rams culture. He’s not under contract next season and will have no connection to the new coach.

Marquez has been a good special teams player with the Rams, but that’s all he’s ever going to be. He hasn’t ever proved he can be a receiver that the team can count on. He’s under contract next season and the Rams would take a small penalty by cutting him. He’ll get another shot in training camp to prove what he can do.

North came to the Rams as an undrafted free agent with some potential. Unfortunately we never got to see that potential. After being cut, the Rams put him on IR. He is under contract next season and could be brought back as a camp body. With that said, he probably won’t make the team.

Mike Thomas was another rookie that the Rams drafted that was supposedly going to be the savior of the receiving corp. He was supposed to be the steal of the draft. That wasn’t the case. Between the opening kickoff fumble against the Atlanta Falcons and the long pass from Goff that he dropped that probably would have been a touchdown against the Seattle Seahawks, he hasn’t done much well.

He’ll be under contract next season and might be brought to camp, but the Rams need players who can make plays. When he’s been given the chance, Thomas hasn’t been able to do so.

Remember when Nelson Spruce was supposed to be the saving grace of the receiving corp? Yeah, well that never happened as he could never stay healthy. Spruce had one good game in the fourth quarter of a preseason game against the Dallas Cowboys backups and made the team because of it. That’s not to say he can’t be good, it’s just stating facts.

He is under contract for next season and could be worth a look in camp. Unless he once again impresses in the preseason and in camp, he may not make the team.

Paul McRoberts has a very intriguing skill set as an undrafted player and last week he finally got some snaps. He’s not under contract next season and because of that unless he balls out against the Cardinals, and even then, there won’t be much of a reason for the next coach to bring him back.