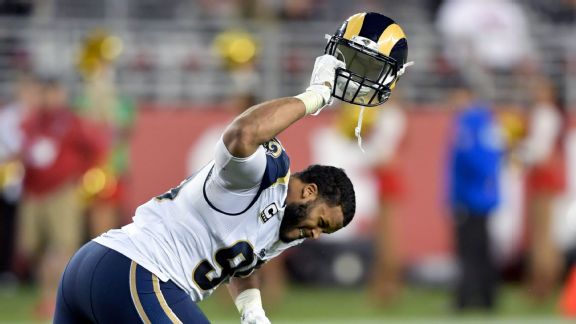 The Los Angeles Rams has been struck with more bad news today in addition of Rams wide receiver Bradley Marquez, whom was  placed on season ending injured reserves today.

Ian Rapoport of NFL Networks, has reported that the Rams DL Aaron Donald, has been fined $18,231 for unnecessary roughness, and $24,309 for unsportsmanlike conduct. The excessiveness of the fines were due to the fact that Donald is a repeated offender.

Donald was excessed a penalty in last Thursday Night Color Rush Game, against the division leading Seattle Seahawks for apparently grasping the face mask of Seahawks running back Thomas Rawls. After the flag was tossed at the torso area of Donald, he would then be seen tossing the flag directly back at the enforcing referee that had thrown the flag. It appeared to be a perfect toss by Donald while he laid on his stomach and whiffed it back almost at the ref’s feet. Seattle would clinch the NFC west after the victory of defeating the Rams 24-3.

As seen in photo above, Donald was ejected in league opener against the San Francisco 49ers for apparently tying to assist to help break players up from the scuffles that had taken place in which he was excessed with two unsportsmanlike conduct penalties, one of the two resulting in having contact with an official.

The scuffle transpired after the 49ers quarterback Blaine Gabbert, kept the ball on a read option for a short gain on a second down and 10 play. Gabbert would fake the ball in Shawn Draughn belly, and take off running as he was aggressively tackled by Rams middle-linebacker Alex Ogletree. After watching the replay it appeared that Ogletree gave to the quarterback a extra roll to the turf, and then drug his leg across Gabbert’s chest and bicep area, while stepping over him walking away. The Niners players would take exception to Ogletree’s tackle where players would start pushing and shoving each other.

It would be seen by the replays that Donald was standing behind 49ers receiver Quinton Patton what appeared to Donald’s resting on the back up the neck of Patton. Patton then makes attempt to turn around to brush Donald hand of him, resulting Donald retaliating back by pushing Patton in the face mask causing his helmet hitting the ground.  A barrage of flags would be thrown by the referees, it would be that the second penalty would be a ref in the middle of the scuffle that seemed to receive part of the blow to Patton nipping him on the arm area. Let’s just the ref was in the wrong place at the wrong time and was the recipient of friendly fire. Nonetheless, the ref reacted over-zealously and flagged Donald.

After Donald’s ejection was announced, he would be seen slamming his helmet into the turf with the padding exploding out to the field and yelling obscenities at the ref’s and crowd in regards to the second penalty causing his ejection. It definitely is my opinion that he did get a raw deal for both penalties and maybe should have received one. The Rams defense was out of control in which it was outplayed the entire night by the Niners offense. But, not to see no flags thrown any Niners players was a bit mind boggling especially after they were the one to excite the drams.

The further news at this point has been made by the Rams whether or not Donald will appeal the fines, but however, he will give the league one big hefty check for the holiday season.