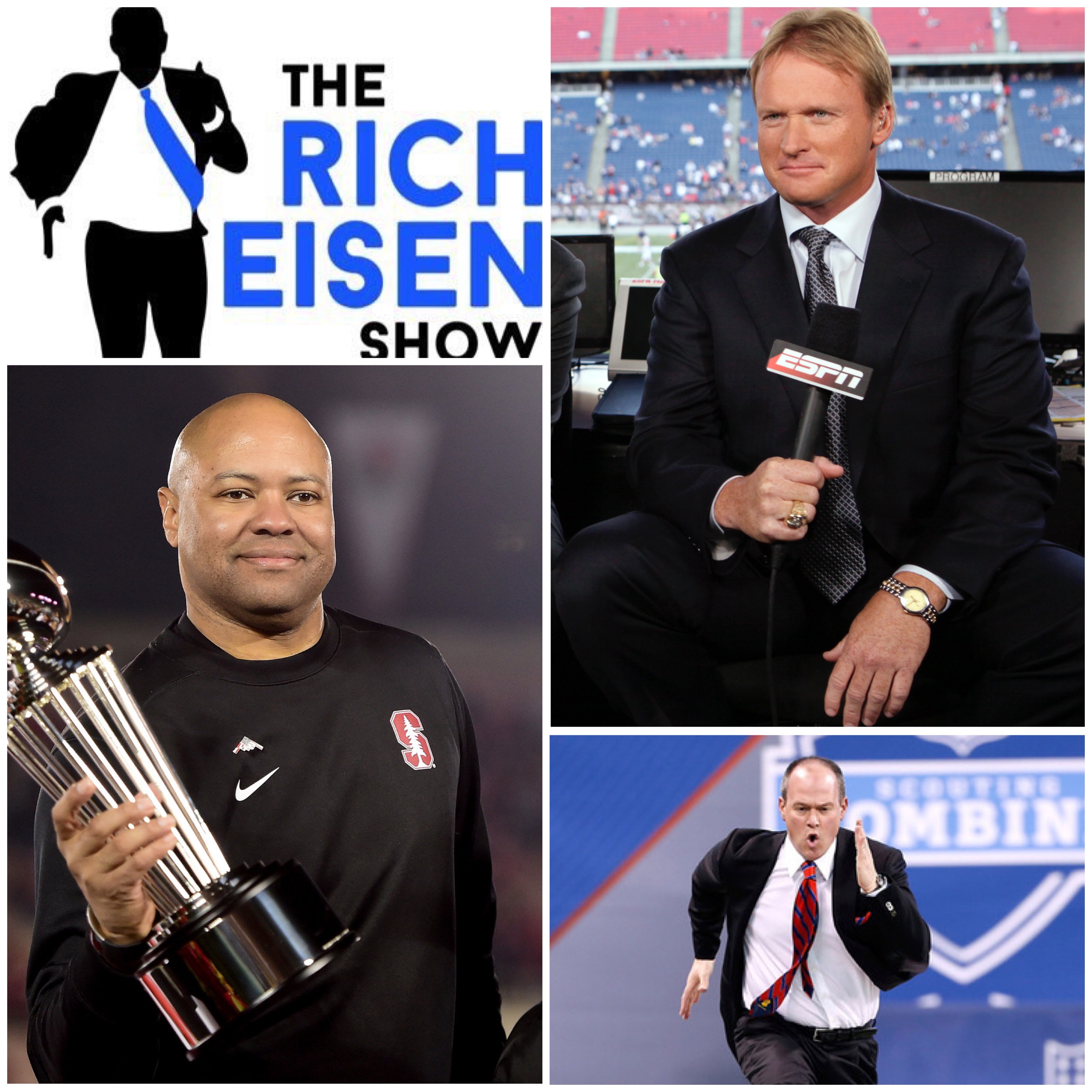 On this morning’s Rich Eisen Show, the former ESPN and current NFL Network broadcaster, announced that the Los Angeles Rams reportedly were chatting right then with a major head coaching candidate regarding their vacant coaching position.

Eisen, mostly known for running the 40-yard dash every off-season at the NFL combine. Dressed fully in a suit and tie, Eisen participates in running the 40-yard dash for a cause commonly known as the,“Rich Run For A Cause”. The cause is for benefiting the St. Jude’s Children Hospital Research. Eisen was challenged back in 2005, by once NFL great wide-receiver Terrel Owens, to participate in the event. Rich has been running the race in efforts also to sub-par his goal in running under six seconds, something he has only achieved twice in eleven seasons.

Yahoo Sports writer Charles Robinson, reported today that the Los Angeles Rams were moving toward a meeting with none other than ESPN Analyst John Gruden about the teams head coaching vacancy. A source with knowledge, multiple sources with knowledge of the situation has told Yahoo Sports.

Speculation of questions surrounded Eisen in efforts to seek information on which potential coach the Rams were meeting to interview for the vacant coaching position that had became available last week, after the Los Angeles Rams organization fired head coach Jeff Fisher. Fisher was fired one day after an embarrassing lost at home to the Atlanta Falcons reaching eight losses out of their last nine games. With that loss, Fisher tied Dan Reeves with 162 losses as being the coach with most losses all-time in the NFL.

Eisen quickly removed Sean Peyton name from the list of hires, because he said it’s simply a trade rumor. The trade would never be made, the Rams have dealt away their next three seasons of draft picks to the Tennessee Titans.

Eisen quickly reported that he has personally had called Stanford’s head coach David Shaw a number of times asking him, “HOW-MUCH-DO- YOU-WANT!”, again asking, “how much do you want?”

“Moving toward meeting with Gruden makes sense”, Eisen reported on his show. Eisen would continue to speak highly on Gruden’s success he once had as a head coach that was traded from one team to the other, which he subsequently played against and winning the Super Bowl the very next season.

Eisen either jokingly or with intention to promote negotiations for Gruden’s employment further with either ESPN or being hired by Los Angeles Rams quoted:“So, Gruden will either take the Rams job or suddenly have a new five year contract with ESPN, for a Ga-zillion dollars.”

They would then ask Eisen why would Gruden leave ESPN? Eisen would continue to speak high on Gruden mentioning that he is the biggest splash for the Rams, that he is the only coach that treats a broadcasting company like its his school, which named FFCA (Fired Football Coaches of America).

However, Eisen would shock his studio team when his co-broadcaster’s would ask him,“if you could have one of those three who would you wan’t, Sean, Gruden, or Peyton?”Eisen would then respond in a condescending way, “I told you,” “ th-that at anytime,” “I’ll call Shaw,” “every time,”“I’ll give him as much money as he want’s to be the be the face of my franchise and a molder to men!”

Eisen was very passionate with his response before signing off from his show, and has ultimately endorsed Stanford’s head Coach David Shaw, as being the new head coach of the Los Angeles Rams. Be mindful, Shaw was a student under Jim Harbaugh, while serving as the Stanford’s offensive coordinator. Subsequently, Harbaugh made it certain that Stanford hired Shaw as the new head coach, after he was named the head coach of the San Francisco 49ers.