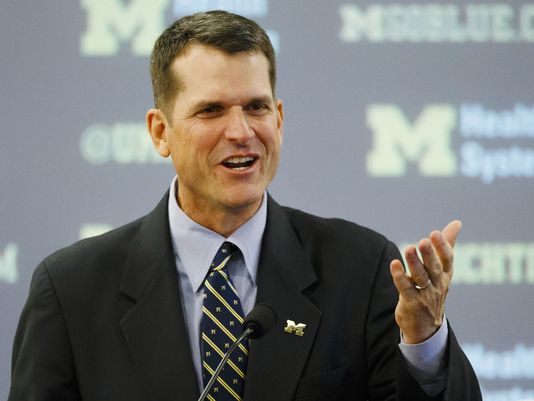 It is VERY important that the Los Angeles Rams AGGRESSIVELY move toward hiring Jim Harbaugh. Here is a list of reason’s why it makes sense the Rams NEEDS to hire Harbaugh as their new head coach:

3. His development of young quarterbacks.

4. Seek RETRIBUTION against the 49ers organization that ran him off, coaching in the same division.

Jim Harbaugh is the son of the legendary football coach Jack Harbaugh, who was an assistant coach at Stanford, while Jim played football locally at Palo Alto High School in Palo Alto, CA.

Jim started his coaching early in his career at Western Kentucky with his dad, while winding down his NFL career. After retirement, Jim became the quarterbacks coach for the Oakland Raiders between 2002-2003, where he coached Rich Gannon to be not only a Pro Bowl quarterback, but also winning the AFC West twice and AFC Championship. The Raiders would then play in the Super Bowl in 2003 where they would go on to lose to the Tampa Bay Buccaneers.

In 2004 Harbaugh returned to the college level as the head coach of the University of San Diego. With immediate success, he was able to turn the UCSD program to perennial winners, by winning the league championships two consecutive seasons. With such success, Jim would then be hired as the head coach of Stanford University in 2007, turning the Cardinals into a Pac-10 powerhouse. His Cardinal’s team played in two bowl games in four seasons, in which one included the 2011 Orange Bowl.

The San Francisco 49ers were seeking for a new coach, and signed Harbaugh to a five-year deal as their new head coach. Harbaugh would inherit a team that had a former number one pick quarterback in Alex Smith, who simply was turning out to be a bust throughout his short career. Harbaugh would then turn Smith into a Pro Bowl quarterback his first season as coach. That very same season, the Niners drafted Colin Kaepernick in which he was brought in at times to challenge the starting Alex Smith. First, Harbaugh quickly turned the 49ers around, where he led the team to the NFC Championship game in each of his first three seasons. Ironically, led his team to the Super bowl in where he played against the Baltimore Ravens coached by his older brother John Harbaugh, loosing the Thanksgiving Classic and Super Bowl SLVII to his older sibling..

The 2014 season,  it was rumored that Harbaugh would not return in 2015 regardless of that season’s outcome, though owner Jed York denied the rumors. It has been suggested that Harbaugh, despite his success on the field, was involved in a fued with 49ers general manage Trent Baalke. It begin in 2013 when it was rumored that Baalke wanted Harbaugh to fire the then offensive coordinator Greg Roman. Harbaugh refused to do so and the adversity affected the entire team and organization. The Niners finished 8-8 that season and failed to reach the playoffs for the first time under Harbaugh. On December 28, 2014, the 49ers announced that they had mutually agreed to part ways with Harbaugh as their head coach, where Owner Jed York claims Harbaugh and the 49ers agreed to mutually part ways immediately after a win over the Arizona Cardinals in the final week of the regular season. Harbaugh, however, later claimed “I didn’t leave the 49ers. I felt like the 49er hierarchy left me.”Harbaugh further added that the 49ers informed him that he would no longer be the 49ers coach after suffering a loss on December 14, 2014, but that he decided to remain as the team’s head coach for the final two games of the 2014 season because, “I wanted to finish what I started–what we started.”

Harbaugh left the organization as one of their most successful coaches in just four years, as well as becoming the first successful NFL coach to depart for a college team.

Harbaugh returned to his Alma Mater as head coach of University of Michigan in 2015 immediately turning around the program who had finished in the bottom half of the Big 10. This season, his 2016 Wolverine team had returned to the rankings as a once again a Big 10 powerhouse by being undefeated majority of the season.  Michigan would be upset by an Iowa team knocking Michigan from the number two ranked team in the nation. Michigan would go on a lose its second game in many weeks, knocking them out of the BCS playoffs contention after a controversial fourth down play resulting in a first down, against inner conference rival Ohio State.

Harbaugh’s Wolverine team will play against Florida State in the Orange Bowl on December 30, 2015. What make sense to a statement released by Rams C.O.O. Kevin Demoff press conference after firing then head Coach Jeff Fisher, he would state that the team will not name a new head coach to mid January 2017. Is this all just coincidental that he’s waiting for Harbaugh team to play their bowl game and aggressively make contract talks.

Harbaugh has all stated to his Michigan team, that their enemies are putting out the rumors, that he will accept the Rams head coaching position. He has told his players is he is staying put right their with his alma mater. But, didn’t he have the same rumors and speculations when he left Stanford for the 49ers!

Let’s just say $12 million dollars will make anyone change their mind, and that is what it may take to lure Harbaugh away from Michigan. He has a young franchise quarterback, franchise running back, a strong defense, and offensive and special teams weapons. He can turn this franchise around in a matter of no time.

YOU MUST HIRE JIM HARBAUGH AT ALL COST! HE IS THE BEST FIT COACH FOR THIS YOUNG RAMS TEAM!