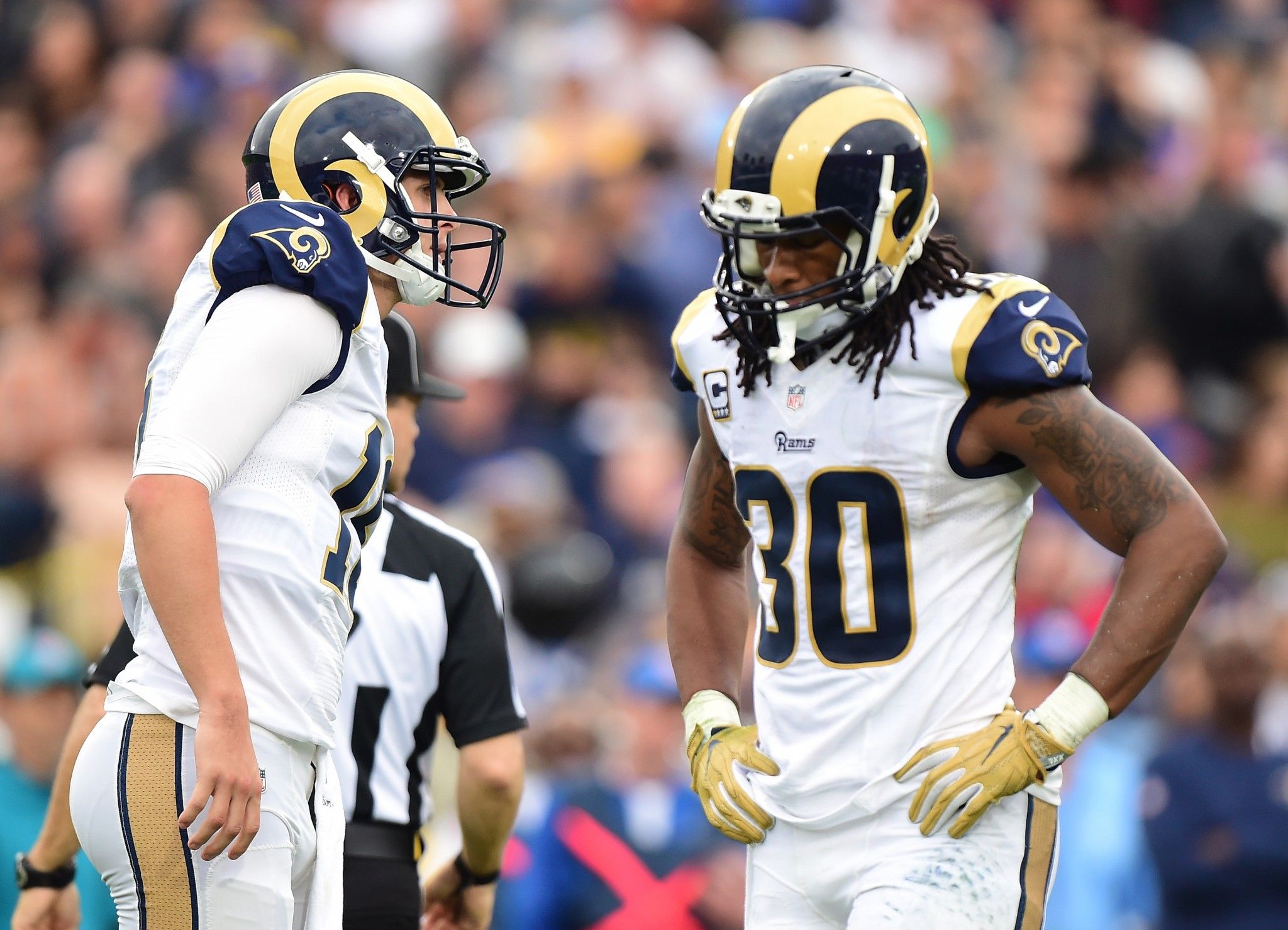 For weeks now, it has been speculated that Todd Gurley unhappiness with the performance of the Rams offensive line and or of the offensive play calling of offensive coordinator Rob Boras. After Sunday’s shellacking administered by the Atlanta Falcons, Gurley finally broke, after viewing him on national television yelling at Rams quarterback coach Chris Weinke and quarterback Jared Goff on the sidelines. Gurley would then express his feelings in regards to his frustrations and emotions with this 2016 season.

Gurley was ask did he know what was the issues with the Rams offense coming off a Rookie of the Year award and eclipsing the 1,000 yard mark last season, he had this to reply:

Gurley: “Man, we look like a middle school offense out there.” “I mean, I’m going to be quiet. My mom said if you don’t have anything good to say, don’t even say it. I’m just going to leave it as that.”

Reporter: What do you guys play for the rest of the way with nine losses already?

Gurley: ( rubbing his forehead in frustration replies,) “Man, you got to play!” Shaking his head adamantly back and forth, “I don’t care if we,” (Gurley then pauses), “ out the playoffs or not!” “I don’t— it don’t care.” “Just come up, show up and play!” “That’s why we play this game.” “Show up and play!”

Reporter:  “Do you feel like everyone has been doing that?”

Gurley: Closing eyes and slightly shaking his head, “I don’t, –I really don’t!” (Frustratingly gazing up at the ceiling, Gurley continues to reply), “We’re just going through the motions.” “Looks like everyone is just like playing to get through.”

Gurley: “The players are the ones on the field.”

Reporter:  If it’s not the coaches running the middle school offense, then what can the Rams do to get back on track these final three games? Ten straight losing seasons, how do the Rams move forward?

Moving forward, the Rams will travel to play against a Seattle Seahawks team on Thursday night, a team that they already beaten once this season. The Seattle Seahawks are coming off an embarrassing lost to the Green Bay Packers yesterday and will be looking for retribution against the poorly playing Rams.

It shows that no matter how frustrating or disappointing Gurley has been this season, he has the respect from me. If a professional athlete withhold his badgering of teammates, coaches, and personal feelings on the account that he exercised how he was raised as a child from his mother, than I believe Mother Gurley should rub this off on the entire organization.

The attendance of the Rams fans was despicable to say the least in which many fans boycotted the game in efforts of solidarity to former Rams great and Hall of Famer Eric Dickerson whom was not in attendance of the game. Dickerson spoke out publicly that the Rams offense was boring as hell, quarterback coach Chris Weinke was not great himself, how could he teach someone else to be great, and Jeff Fisher should be let go as head coach because he has regΩressed this organization.

Jeff Fisher would strike back at Dickerson by informing him that he was no longer welcomed on the Rams sideline because he made it uncomfortable for players and coaches. My opinion, Dickerson was telling the truth, it showed up again on Sunday against the Falcons. Many Rams fans cheered yesterday “FIRE FISHER” with many wearing #29 Eric Dickerson jersey’s.