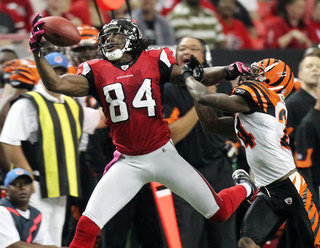 The Los Angeles Rams need weapons quickly to bring out the best of young rookie QB Jared Goff. The first three games, Goff had shown promise as a possible prolific passing quarterback, but the lack of an offensive line has hurt him.  In a offensive meltdown this past Sunday, Goff’s last two passes to Kenny Britt was a beginning of something that ended. So, supply him with an experienced, sure-handed receiver who will simply make the tough and difficult catches.

Roddy White has been a free-agent since the Atlanta Falcons released him in the offseason. Many speculated the the Tampa Bucs would sign him being that he played under Dirk Koetter’s as the offensive coordinator in Atlanta.

Why is White not on a NFL roster this season? Simply is not because of his on field talent! Many believe it has something to do with his public statement and comments he took to social media in regards to the George Zimmerman verdict:

“F-g Zimmerman got away with murder today wow what kind of world do we live in”. He received the most backlash for the following tweet: “All them jurors should go home tonight and kill themselves for letting a grown man get away with killing a kid”. After a few hours he complained that “people on Twitter want me to get in trouble for a tweet”, but he apologized the next day.

White’s an old man in football years, but he has averaged over 11 yards per reception despite his football age, he started every game on a talented young Falcons offense and that’s worth something. Although White isn’t as young as he used to be and wouldn’t likely be a huge threat in the red zone, he still is capable enough to make those clutch third-down catches that have been non-existent this season.

He possibly could be a good player to take the 3rd receiver slot, if not the starter outside opposite of Britt. He has sure hands and is a great route runner, but do we necessarily need him? Yes, we do.  I have a lot of respect for Roddy White, and although I am not sure we will sign him, I can see how he would help this Rams offense. Especially, if the price is right to get him in a Rams uniform.

Rams signing White will no doubt bring out everything White has left in the tank and with Goff as QB, he would be put to use more than he had been in with the Falcons in 2015. In fact, after a tough lost last week in New England, with receivers dropping passes, Goff would have that ace in the hole when needing a big reception.

Les Snead and Jeff Fisher just received contract extensions, they need to win this fan base back, they should get in contact with White’s agent, and sign him immediately!  Rams fans needs something to celebrate quickly from after having to stomache last Sunday’s news regarding Fisher’s extension.