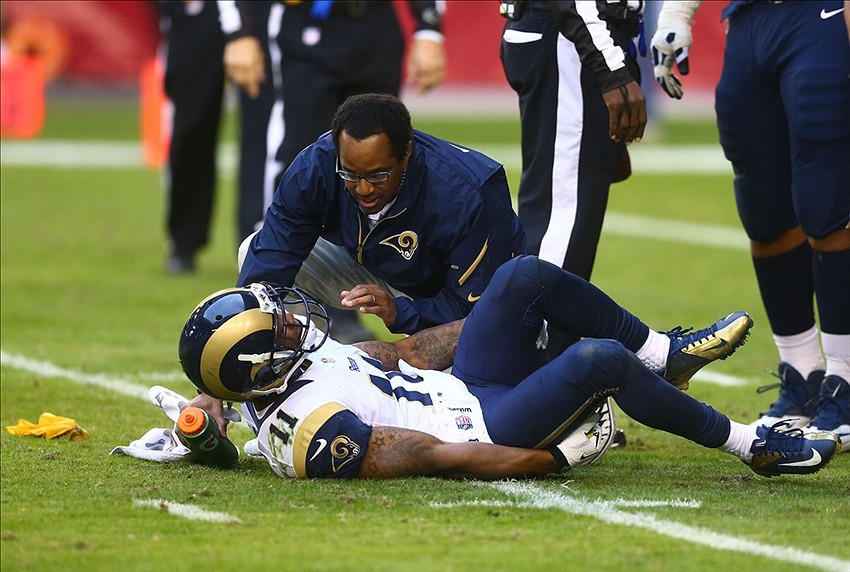 The Los Angeles Rams will be without three of their starters in today’s matchup against the New Patriots:

Tavon Austin (chest), Robert Quinn (concussion), and Roger Saffold (hand) all have been ruled out with injuries they suffered last week against the New Orleans Saints.

Austin scoring the Rams first touchdown last week, immediately was treated for a chest injury after catching Jared Goff’s first NFL touchdown pass. The training staff continued to ice up Austin whenever he was on the sideline.

Roger Saffold suffered an apparent hand injury early in the second quarter causing him not to return to sideline until after the half, but in street clothes. The hand injury must been severe enough that he couldn’t withstand the pain.

Robert Quinn concussion is one that is bizarre to all, but was placed under the protocol of concussion symptoms. This injury probably will be the most important of the Rams who will be needing heavy pressure to disturb Tom Brady. Watch for Eugene Sims or Ethan Westbrook to replace him in the line-up.

The New England Patriots matchup with the Los Angeles Rams had  Quarterback Tom Brady, receivers Julian Edelman and Chris Hogan and tight end Martellus Bennett were are listed questionable of playing today. All of them have been listed as active for today’s game. Specialist Jordan Richards and Marcus Slater has been ruled out.

The Patriots will also be without Tight-end Rob Gronkowski who had season ending back surgery on Thursday will be missed by the offense however, Marcellus Bennett looks to pick up the slack but is banged up as well.