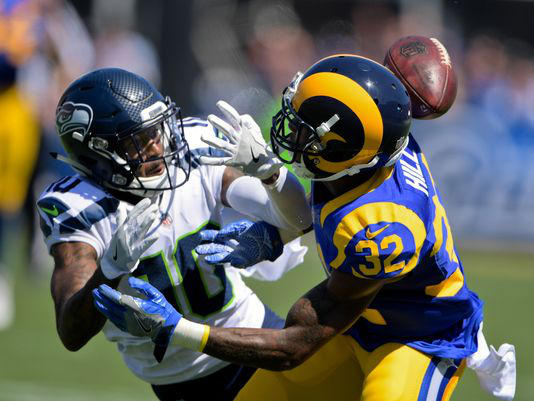 The Los Angeles authorities has reported that the Los Angeles Rams cornerback Troy Hill had been arrested Saturday morning on suspicion of a DUI.

The defensive back was arrested after his Mercedes rear-ended a big rig on westbound Interstate 101, where CHP administered a sobriety test on Hill after suspecting him of intoxication. Reports also shows that the truck driver was not injured in the accident.

Hill stated to the patrolman that he was his way to practice, before he was pulled over, subsequently he was place under arrest and later posted a $15,000 bond in Van Nuys, CA.

Hill played collegiately at the University of Oregon, and starred in high school as a defensive back and receiver at St. Bonaventura High with a 11-2 record his senior season. Hill senior season was forfeited when it was learned that Hill was ineligible to play.

The Rams claimed Hill off waivers from the New England Patriots on December 31, 2015.

Hill competed for the starting corner position when starting corner EJ Gaines went down with an injury during the pre-season. The Rams initially started their newly acquisition corner Cody Sensabaugh who turned out to be a bust for the Rams, in which the team released him after the second game of the season. Hill was inserted into the game early against the Seattle Seahawks where he played and performed well. He made a couple of great defensive plays to help the Rams defeat the Seahawks for the teams first win in the coliseum since 1979.

The Rams front office has not been reached for any comments regarding the arrest. The Rams had just activated Blake Countess from the practice squad, after placing receiver Nelson Spruce on the injured reserved. LeMarcus Joyner is listed as a questionable play for Sunday, if Joyner should be available to play and Rams releases Hill, activating Countess will be a safe keep for the Rams.

In a statement, Rams said they “are aware,” adding: “As it is an ongoing legal matter and we are still gathering information, we will have no further comment at this time.”

The Rams has announced that Troy Hill will be inactive for tomorrows game against the Miami Dolphins.