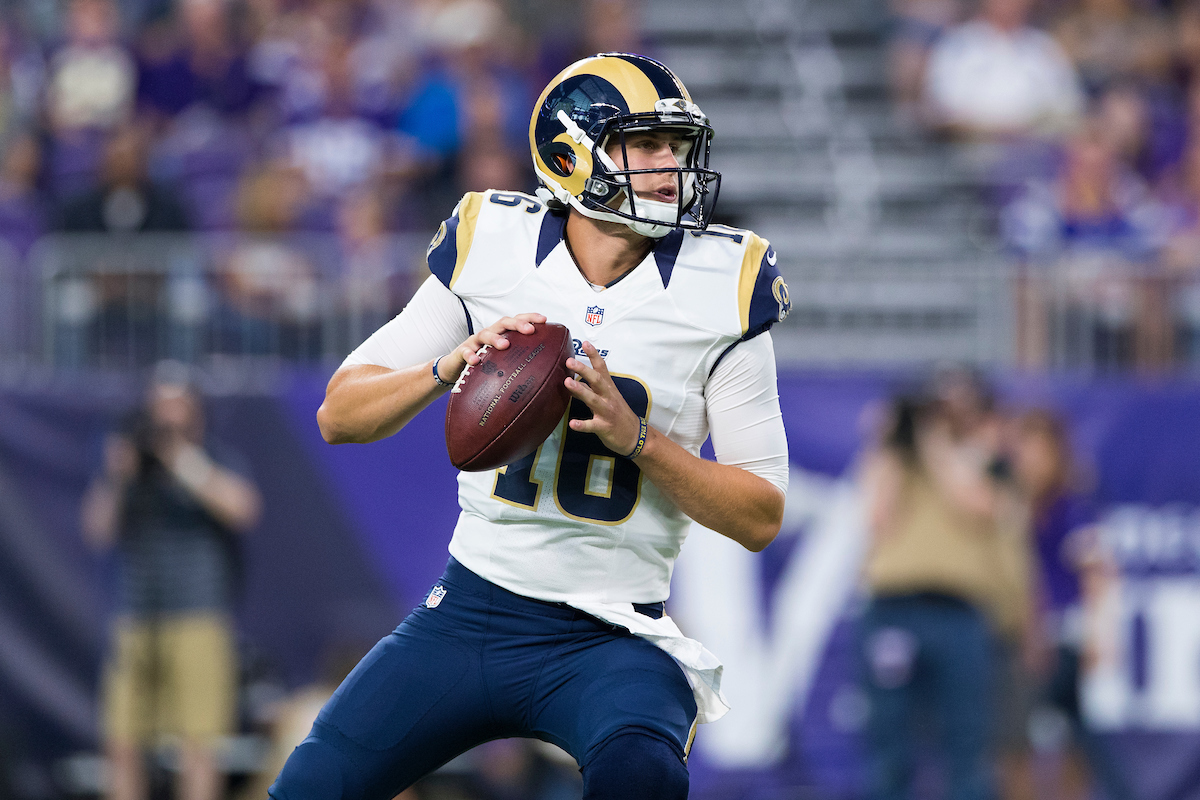 Today is the big day for rookie no.1 overall pick Jared Goff, and it’s an even bigger day for the Los Angeles Rams as a whole. Today won’t define Goff’s career, but it’s worth mentioning the Rams, who sit at 4-5 are still in the playoff hunt and every game from here on out is considered “must-win”.

Goff is already being looked down on by analysts across the board. Chris Simms of Bleacher Report said that Goff and the Rams were “guaranteed to lose” against the Dolphins today. On NFL Network no one picked the Rams to beat the Dolphins today. In a segment on the network Terrell Davis and Willie McGinest had to decide whether Goff would “Sink or Swim” this Sunday. They both unanimously said Goff would sink and then even the fan vote was a majority for Goff sinking.

The former California Golden Bear could very well sink, but the way everyone seems to be writing him off like he’s going to be how he was in pre-season leaves Goff in a position to take the league by storm. He may not do that, but he is in a perfect position. The Rams again, need to win all, if not every game except maybe one to have a chance at the playoffs. Goff is going to have to be their knight in shining armor for that to happen.

Many analysts and fans still believe the Rams are going to only win three games at best the rest of the season. That also again, might be true. However, there is no denying if Goff and the Rams were to come out and play well enough to at least make the season interesting going into week 16 or 17 they would have already shocked analysts and fans across the board.

Now, make no mistake the Rams are facing a good Miami football team. The Dolphins sit at 5-4 and are in the playoff race this season in the AFC after hiring their new Head coach (and the youngest one at that) Adam Gase. Miami’s defense is not a joke and Goff is likely to face the heat early on with pass rushers like Ndamukong Suh, Cameron Wake and Mario Williams. To match that, the Rams will be starting a very inexperienced center in Demetrius Rhaney, a Left tackle who does more harm than good and besides those two factors, this line is quite possibly the worst in football right now. So needless to say Goff is going to have to really earn a win.

With the struggles of Todd Gurley coming into play, the lack of an offensive line and a good defense. If Goff plays a good game of football this isn’t just any game. Proving that you can beat a team and play well when your back is against the wall is a special quality. Bear in mind Goff is being thrown in as the Rams starter with seven games left on the schedule and a lot of ground to make up in the standings. Goff didn’t make his bed, in fact the guy who he wasn’t ready to start ahead of until this week made the bed and now Goff will have to lay in it. Keenum lost five games, which leaves Goff margin for error at about one loss the rest of the way, if even.

One thing is for sure, after watching the rookie QB’s come in this year and perform the way they have like Dak Prescott, who is leading an 8-1 Cowboys team that was the fourth-worst team last year and Carson Wentz who is leading a 5-4 Eagles team that threw him under center right before the season started. Starting a rookie QB is encouraging, but even more so. Just think about how impressive it would be if Goff who started his season at 4-5 and his back against the wall lead the Rams to a 10-6 season and a playoff berth. While Prescott and Wentz have looked great and have really led their team down the stretch. They also were able to start from week one and work every week on improving their game.

The thing is with Goff, if he struggles today, it’s going to be tough for him to turn it around and improve his game in time for the Rams to bounce back and make the playoffs. That’s exactly why an impressive showing today from him and a turnaround for the Rams would be the shocker of the NFL to many, myself not so much.

I believe Goff is ready and has ultimately been ready since around week four, but if he wasn’t, then it was at least after the bye week. Even if Goff plays more average than good necessarily, it could mean big strides in the right direction for the L.A. offense that is ranked last in the league. The Rams have a great defense and once the offense is able to come together the way the defense has, no one will want to play these Rams.