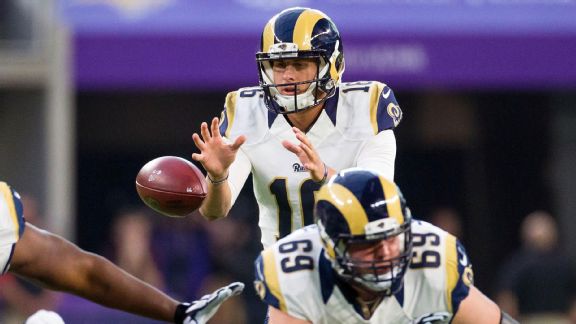 Jared Goff, the 2016 number one overall pick of the Los Angeles Rams is expected to make his NFL debut at quarterback. Game time attendance is expected to be well over 90,000 fans at LA Memorial Coliseum as the Rams host the Miami Dolphins.

Let it be no surprise, but speculation of the entire sports media will be viewing in on this game to be a critic of Jeff Fisher by drafting Goff and waiting late into the season to play the quarterback after subpar play of Case Keenum. But, many fans in Los Angeles are anxious to really see a new quarterback leading the offense and to witness the rookie first start as a winner or bust.

Goff’s preseason play, lets just say was a rather disappointing performance in his first game against the Cowboys.  He was hit, sacked, fumbled, and threw an interception in his preseason performances. Truly to many he did look like he wasn’t worth the multitude of draft picks that the Rams had given up to move up in the 2016 to draft Goff number one overall.

Suh, the former number two overall pick will be probably be matched up with Rams Roger Saffold. Look for Saffold to try and man handle Suh, provoking Suh to entertain his dirty play.  Suh has received numerous fines and suspensions for kicking and stumping players. The best interest in hand, Rams offensive line will be poised enough to protect the young Goff. The Rams expect to be without their starting center Tim Barnes with a foot injury, and third year man Demetrius Rhaney is expected to start his NFL debut at center for the Rams if Barnes can’t play.

Don’t expect to see Goff get rattled, he is the  reigning Heisman winner, and the number one overall pick.  The difference of a quarterback that you will see from Goff than you would from Keenum, is Goff has a quick release. Not only does he has a quick release, he also is a very accurate thrower. His collegiate number were greater every with touchdowns, passing yardage, and interceptions. The freshman year Cal Bears offensive line was horrendous where Goff took a ton of hits and sack. This should me nearly the same atmosphere on Sunday when gets under center.

To speculate further, I will have go out on a limb that if the offensive line protects Goff long enough to get off his passes, the kid will have a 300 yard performance with three touchdown passes. I would dare the Dolphins to try and load up the box with eight and nine men, they will not be facing a short and noodled arm quarterback such as Keenum. If the Dolphins elect to play with fire, they will get burnt!

Rams offensive coordinator Ron Boras has spoke and stated that the Rams will not scale the playbook. The playing calling would be the same as when Keenum was the quarterback.  Hopefully, the plays that are being called don’t have the same effects that has bored many fans throughout this 2016 season.  The Rams receivers will stretch the field early as starting running back Todd Gurley pick up from the fourth quarter of last week game and get his first 100 yard rushing game since last season.