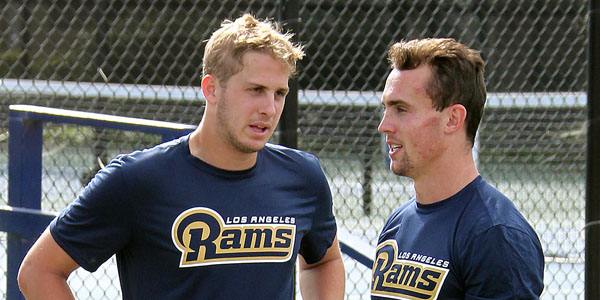 The Colorado standout WR Nelson Spruce had acquired experience and a rapport with no.1 overall pick Jared Goff in the offseason workout sessions they had together when they both took their private visit with the Rams.

The undrafted free agent WR Spruce only visited the Rams and it paid off for him. He ended up making the 53-man roster despite only playing in one quarter of the first NFL preseason game. Spruce immediately made his name known by the fans catching a touchdown from Sean Mannion and leading the Rams to a win over the Dallas Cowboys. He unfortunately was ruled out for the remainder of the preseason due to a knee injury he suffered on the touchdown.

Spruce was aiming for a return in the first four weeks of the season, but after rehabbing and trying to come back from his knee injury, he suffered a calf injury. It’s now week 11 and Spruce is finally nowhere to be found on the injury report (unless it’s in invisible ink). In all seriousness though, this is great news for Spruce.

I saw Spruce first-hand warming up at Metlife Stadium before the Jets game. He was inactive that day, but in watching him snag passes out of the air like Odell Beckham Jr.’s pregame rituals with the one handed grabs. It made you wonder how hurt Spruce really was. Now, I am not accusing Head coach Jeff Fisher of holding Spruce out even when he is healthy, but it was a little alarming seeing Spruce flying all over the field in drills and then seeing him pop up on the inactive list on the big screen scoreboard.

Could Spruce have been held out this entire time for Goff? Is it that far-fetched to think something like that? Not really, as a matter of fact one could wonder if it was really a coincidence. Spruce came off the injury report that he has been stapled to this season as soon as Goff was named the starter.

Well, if this is in fact the case and the Rams aren’t pulling our leg then the Goff and Spruce connection could be showcased in full force this Sunday versus Miami. With this news and the news that Goff would start, it makes you wonder if the Rams could be setting themselves up for something miraculous and exciting. Spruce isn’t just an end of the depth chart filler. The Rams love what he brings to the table and he could be the security blanket a young QB like Goff needs.