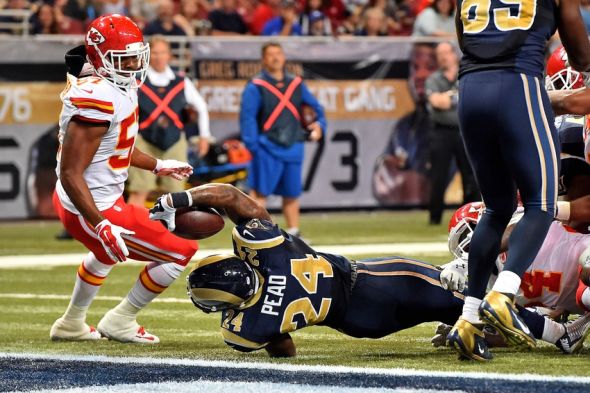 The Los Angeles Rams former running back Isaiah Pead, from the University of Cincinnati is fighting for his life,  after being involved in a single-car accident early Saturday morning in Columbus,OH.

Authorities had reported that Pead, had lost control of his vehicle at approximately 2:32 a.m. Saturday morning and drove off the side of Interstate 670 in Columbus. His car went through a guardrail and down an embankment, crashing into several trees ejecting from the vehicle while a passenger, 27 year old Wesley Richardson is listed in stable condition.

Pead was chosen by the the St. Louis Rams as the 50th overall pick of the second round of the 2012 NFL Draft.  Pead was one of head coach Jeff Fishers first class of draft picks when taken over the team and was considered to be one of the best running backs in the draft.  However, bad production and fumbles caused Pead to enter Fisher’s dog house and fought for a roster spot.

In 2013, Pead was suspended for one game for abusing the substance abuse policy, and more troubles would add tearing his ACL in 2014 in the second preseason game returning a kick against the Green Bay Packers.

In 2015, Pead was in a battle once again to make Rams team a running back, as he surprised many with a great pre-season and his ability on special team. In the home opener against the Seattle Seahawks, late in the fourth quarter Pead fumbled a run which was recovered by the Seahawks, who could have potentially converted the turnover to win the game. The Rams held on to win the game but Pead was released following the game.

The Pittsburg Steelers signed Pead to their roster after losing Leveon Bell for the season, and he was later released and signed by the Miami Dolphins. The Dolphins released Pead and several others players in week six, along with several other players. Pead was still looking for another job with another organization until his critical accident.

Family members of Pead has reported that he has been out of surgery but is in critical condition fighting for his life.  Let’s add the Pead’s family into our prayers as fight to live and for a speedy recovery.