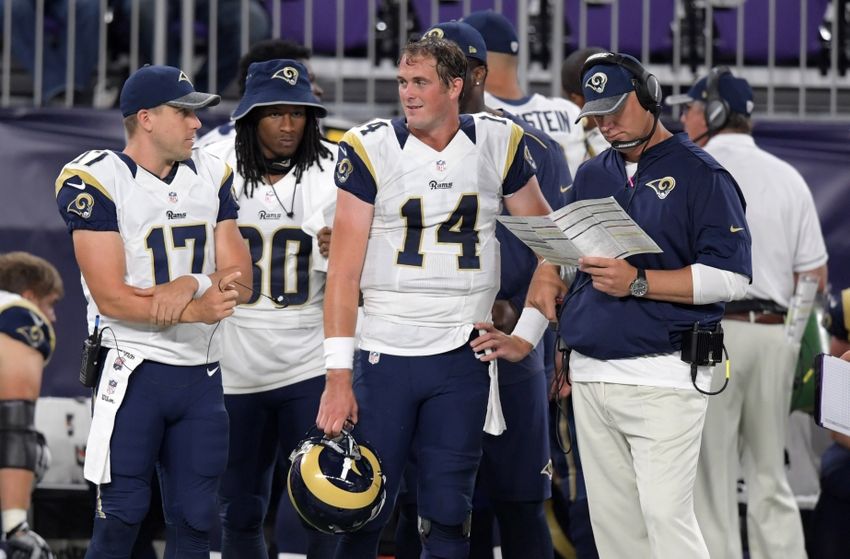 We are here in November and it’s not all sunshine and rainbows for the Rams. What has happened has been a complete collapse, losing four straight games. The Los Angeles Rams have fallen to 3-5 on the year and now their playoff chances appear to be dwindling. That’s okay because the Rams have a solution right? Well, maybe, but how will we ever know if that ‘solution’ isn’t given a chance? Answer, you won’t!

Coming into the season, I expected the Rams to finish 11-5 and receive quality play from starting QB Case Keenum until the bye in which I felt the Rams would make the switch to rookie QB Jared Goff. However, neither has happened and the Rams are in need of fixing it. While the young arm in Goff might not be ready for what the nasty NFL defenses will bring to him. It’s time to kick Keenum off the stage and have someone else perform. In all seriousness, it’s time to see what the former 2015 third-round pick has up his sleeve.

They say that coaches who see the players 24/7 know best, but it might appear that fans are giving Fisher the benefit of the doubt. The problem is this, Fisher isn’t an offensive coach. He is a defensive minded coach and has proven that he really can’t develop offensive talent. Perhaps the narrative should stop being “If Mannion was better than Keenum, he would be starting over him.” and more like positive about seeing what the Rams have in the young QB from Oregon State.

It seems a little insane to continue to try something that isn’t working, but that’s been Fisher’s tenure with the Rams. Mannion wouldn’t be the first QB drafted by Fisher’s Rams to be wasted if he doesn’t ever get his chance. You just have to go back a year before Mannion when the Rams drafted Garrett Gilbert out of SMU. Although I didn’t agree with the pick, Fisher made no attempt to develop him. Gilbert was cut and added to the practice squad to start the 2014 season. He was then released from the practice squad and given up on.

Now bear in mind that was just a sixth-round pick wasted. Mannion is a third-round pick that the Rams drafted over the likes of Packers backup QB Brett Hundley, Jets backup QB Bryce Petty and Broncos starting QB Trevor Siemian. So what is the point of telling you this? Well, for starters Hundley is on the bench like Goff and Mannion because he is sitting behind arguably the best QB in the league Aaron Rodgers. Bryce Petty was on the bench due to the fact Ryan Fitzpatrick had a great year last season for the Jets and Petty could possibly play versus the Rams this weekend. Siemian is the starting QB for the reigning Super Bowl champion Broncos and he was drafted four rounds after Mannion. The Broncos drafted a QB Paxton Lynch, who is on the bench in favor of giving their seventh-round pick a shot before they bring along the new era.

Moving on with the Rams, Goff and Mannion have not been on the bench in favor of Aaron Rodgers, Ryan Fitzpatrick or Trevor Siemian. They have been on the bench in favor of starting a QB that is no better than a journeyman backup at best in the NFL. It goes right back the title of the article. If Goff isn’t ready, then it is in fact turn for Mannion. Keenum should not be under center. You have a team that just won the Super Bowl and they are in the same situation, yet they cut the veteran backup who was Mark Sanchez before the season which is equivalent to Keenum on the Rams. The Broncos then promoted Siemian the starter like what the Rams should have done with Mannion. Now the Broncos are waiting until Lynch is fully ready to play him, the Rams on the other hand? They have completely butchered their season rolling with Keenum, possibly stunted the growth of Mannion by having him inactive all season and have kept a guy who started every game he’s ever played in on the bench.

It’s getting to be too late, Mannion is in his second-year and he continues to be overlooked and disrespected. Mannion was active week one and hasn’t been active since. If Mannion isn’t given a chance he will almost certainly leave in free agency. This isn’t the NBA draft, in the NFL draft third-round picks are valuable. Think about the talent that comes out of these mid-rounds. We are seeing Dak Prescott in full-force this season, Russell Wilson is a Super Bowl champion and Kirk Cousins led the Redskins back to the playoffs. The fact that Fisher hasn’t given Mannion a chance just speaks to fans and tells them one thing. It’s political within the direction of the team. The Rams couldn’t afford to put in Mannion and have him pan out and look really good because that would be a slap in the face to the pick of Jared Goff.

Regardless, Mannion should be under center or Goff but riding with Keenum this far into this season isn’t going to lead you to the playoffs and the sooner Fisher realizes that the better.