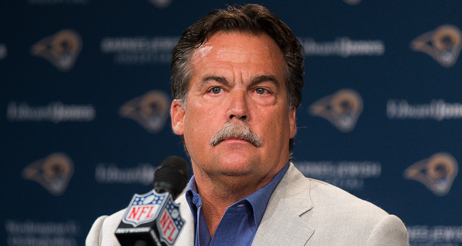 In the Los Angeles Rams post game interviews, it was apparent that several media personnel were completely disturbed with comments that Rams head coach Jeff Fisher stated. In fact, the media was challenging as well as asking Fisher about the contradicting statements he made in London in regards to the quarterback situation with the Rams.

The Los Angeles Rams suffered yet once again another close loss on Sunday at the hands of the Carolina Panthers. The game was a low scoring contest that really didn’t have much excitement for both sides on the field. There were only two touchdowns scored in the game, the Panthers scored on their second drive with Cam Newton connecting with his wide open tight-end Greg Olsen. Early in the fourth quarter Lance Kendrick dropped a touchdown pass hitting him between the numbers. The Rams scored their only touchdown with just 31 seconds left in the fourth quarter, where Quarterback Case Keenum connected with Wide receiver Kenny Britt on a fourth down touchdown pass.

What concerned the 86,000 plus fans that packed the Los Angeles Memorial Coliseum on yesterday was once again the lack of offensive performance. The boo birds were out often and early whenever Keenum’s in-completed passes hit the ground. The chants of, “We want Goff”, roared from the stands. What seems to amazes me the most, was the comments that head coach Jeff Fisher stated at the Rams post game interviews. Fisher stated that he did not hear any chants from the stands of what the fans were lobbying. Let’s back up one moment, earlier it was mentioned that it was 86,00 fans in the stands, even the neighboring stores heard the chants, so how did Fisher not hear?

The Rams offense has completely taken a downward spiral, and their final destination may end up below sea level. It is very apparent that Fisher welcome back home to Los Angeles has worn out with many fans. If something doesn’t change soon, like replacing Keenum at quarterback. The many faithful fans that supported this team coming back to L.A., will turn their back on them until Fisher is removed as head coach. The waiting process will take a few years, once owner Stan Kroenke became the CEO of this team, he quickly brought in Fisher ignoring other qualifying coaches for this team.  Money in the bank is safer for Coach Fisher then peas in the pots for the million of Rams fans.

NFL Head Coaches I Would Take Over Jeff Fisher