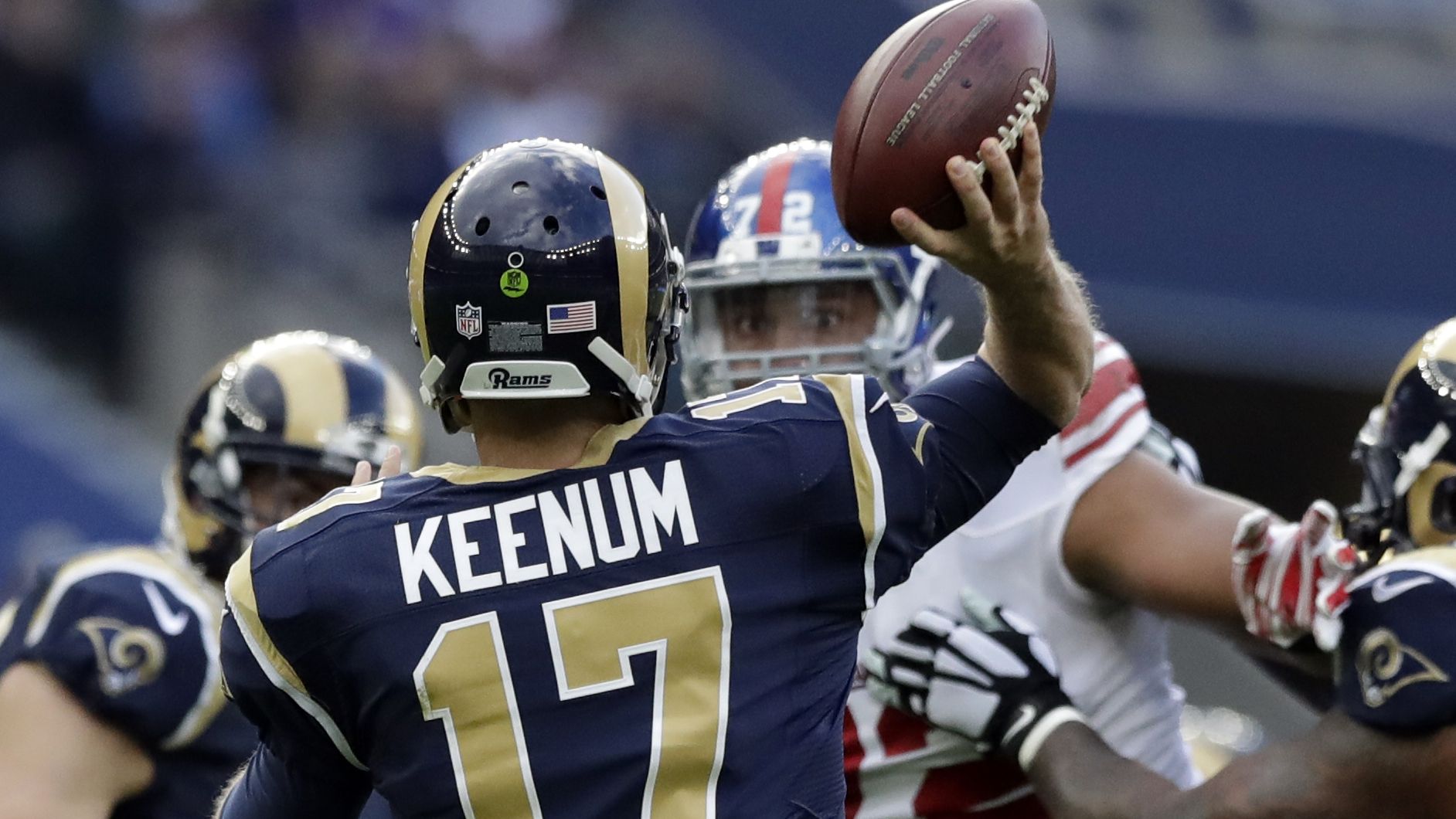 It’s been quite the up-and-down season for the Rams return in Los Angeles. They sit in third-place in a division they really could be leading right now with a 3-4 record and plenty of let downs to thank for that. Here are the biggest takeaways as we look back on what went down during the first half of the Rams 2016 campaign.

We still have yet to see the no.1 overall pick Jared Goff play in a real game

Perhaps the biggest story line and takeaway is the fact the player the Rams dealt away their future for, has yet to play a game for a 3-4 team starting Case Keenum. Yes, it’s a little shocking, but for the most part Rams fans were pretty sure Goff was going to spend most of the first half of the season on the bench. However, now the majority of fans think it’s time to let it rip with the young QB.

Goff right now, is the backup according to Head coach Jeff Fisher. Could that change before week nine’s contest in Los Angeles versus a re-energized Carolina Panthers team? It definitely could. For now, though the biggest takeaway is that Goff is on the bench with average and sometimes below-average play from Keenum.

Todd Gurley has been completely ineffective

This one is just shocking to many, including myself. I had no idea Gurley was going to struggle like he is doing in 2016. Gurley looked like a can’t-miss top three rusher this season. While he could still end up being just that, he’s not off to a good start that’s for sure.

Part of the problem for Gurley has been the lack of an offensive line. Yes, that same offensive line that led Gurley or rather guided Gurley to a 1,000 yard season on the ground. This year is a different story, Gurley is staring at a season below 1,000 yards if he keeps up this type of performance. The bottom line is this, the Rams will not go to playoffs if Gurley doesn’t get it together soon.

Jeff Fisher finally has been put on the “hot seat”

Yes, everyone of you who have been chanting, yelling or even creating promotional images “Fire Fisher” are really backing that ideology this year. Fisher was blamed for how flat the Rams came out on opening night versus the 49ers in front of the nation when they were dominated, losing 28-0 against a team that just won five games last year. Then, even though the Rams went on a fierce three-game win streak and took over first-place in the NFC West division. Fans don’t care because Fisher’s squad has since followed that up with a three-game losing streak.

One of the main things that might have everyone, including the owner Stan Kroenke up in arms about Fisher, is his lack of success with current starting QB Keenum and his stubbornness to play his no.1 overall pick Goff. One thing is for sure, Fisher needs to win this Sunday and onward if he wants to remain the Head coach in L.A.

What we saw versus the Seattle Seahawks in the Rams first regular season game back in Los Angeles, was the defense no team wants to play. The Rams have shown flashes of being an elite defense, but then the issue is the ability to completely stop offensive drives in their tracks. Just watch the Rams on third down and long. No Rams fan likes third down and long anymore. Normally any fan will love seeing the opposing team backed far away from the first down marker but not the Rams.

The injuries the Rams have had to go through this season playing without three of their four defensive line starters in one game and the injury to star cornerback Trumaine Johnson. The Rams have continued to battle through these injuries and on top of that, have received great play out of two young former draft picks CB LaMarcus Joyner and FS Maurice Alexander.

When you took a look at this incoming draft class the Rams had put together. There is no way you were expecting the lack of playing time and production out of these young players. Many felt like the man they call “Baby Gronk” fourth-round pick Tyler Higbee, would end up being a vital part of the offense, but he has only two catches for six yards on the season. In the same round the Rams took Wide receiver Pharoh Cooper, who has zero yards and zero catches on the year after battling injury for the majority of the first half of the season.

Obviously, as covered above, Jared Goff has yet to play and the three sixth round picks have only really been special team’s assets besides LB Josh Forrest, who at this point would be the Rams mid-season rookie of the year by default.

Despite losing four out of their seven games, the Rams are still well in the hunt for the NFC West title

Lastly, the most important takeaway is the fact the NFC West lack of dominance in year’s past has kept the reeling Rams in the hunt to steal the division title. Yes, this is the same division the Rams were leading at 3-1 but since then the Rams have lost three straight and are in third-place, but have been set up down the line nicely with a tie between the Arizona Cardinals and Seahawks.

The Rams were on their annual one week bye last week and they were lucky to see both their rivals, the Cardinals and Seahawks lose their games. Now sitting only one and half games back from the leading Seahawks the Rams have the majority of their second half of the season being played at home.