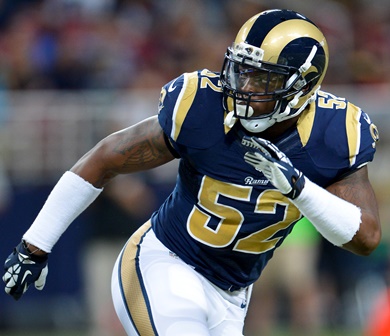 On Sunday, the Los Angeles Rams lost their third consecutive game in London, England against the New York Giants where the Rams hosted International NFL. The Rams started off quickly after a forced fumble was caused by Williams Hayes and LaMarcus Joyner and recovered by E.J. Gaines. The Rams scored quickly after Case Keenum hit Tavon Austin for a 10 yard touchdown pass. The Giants next ensuing drive was quickly stopped after four plays and Rams forced a punt. The offense moved the ball some but the drive was stopped when Keenum was sacked and the Rams settled for a field goal by Greg Zuerline.

The Giants were able to score on their only offensive touchdown, a one yard plunge by running back Rashard Jennings late in the fourth quarter. The scored touchdown resulted as the game winner for the Giants.  Jennings touchdown run was nearly uncontested, as he almost literally walked into the end-zone.  Eli Manning handed the ball to Jennings whom then ran left between the left-guard and tackle. Middle linebacker Alec Olgetree, over pursued, mis-reading Jennings, in which he then whiffs on a attempted arm tackle allowing Jennings to score. In the NFL, middle linebackers are expected to make those types of plays, especially inside the red zone.

The 2016 offseason, the Rams moved Ogletree from strong-side backer to middle linebacker after the release of James Laurinitis. On May 2, 2016, Ogletree along with fellowed Rams teammate Tavon Austin had their fifth-year options picked up by the Rams.  On paper, it looked well with the Rams penciling in Olgetree at middle-linebacker, but it is my opinion, it may have been the wrong decision.

While at the University of Georgia, Olgetree played safety during his college tenure. He was frequently used as a linebacker as NFL scouts explored him at that position. In 2013, with 30th overall pick, he was drafted by the then St. Louis Rams in the first round. As a rookie, Ogletree started outside line backer and was putting up significant numbers his first two season recording over 100 tackles each of those seasons and causing 10 forced fumbles. Unfortunately, in his third season he suffered an injury, breaking his fibula in which it forced him to miss the remaining of the season despite being placed on PUP return list. Ogletree had registered 42 tackles, 27 of them solo, and two sacks. This 2016 season through seven games, Ogletree has recorded 57 tackles, 47 of those are solo, and no sacks, with one forced fumble. His play is declining at the middle linebacker position and his past stats proves that he’s more effective as an outside linebacker.

The 2016 season has seemed to be a roller coaster of ride for the Rams new middle linebacker. In week one, he was exposed the entire game leaving gaping holes where the 49ers running backs attacked successfully as well as quarterback Blaine Gabbert. In week two, there seemed to be a bit of promise where Olgetree would be seen flying all over the field and creating a forced fumble and recovery to secure a victory against the Seattle Seahawks, in the Rams first home game in Los Angeles since 1979. The next few contest, teams started running at Ogletree with success, many of times catching Olgetree either over committing or telegraphing blitzes.  It all came to light once the Rams played the Buffalo Bills in week #5, where LeSean McCoy ran wild against the Rams defense. If its any consolations, the Rams were missing 75 percent of their starting defensive lineman all whom were out for injuries.

Week #6 featured a Detroit Lions team that had three running backs inactive due to injuries and were left with second year fullback and newly signed running back Justin Forsett. Zenner was able to hurt the Rams inside on runs that caught Ogletree once again out of position. This resulted in the Rams losing the second straight game and their third against the Giants this past Sunday.

My opinion if this Rams defense want’s to become that fearful defense they once was such as last season, position changes needs to be made on quickly. Alex Ogletree needs to be placed back outside with Mark Barron, and if the Rams are not comfortable with Bryce Hager or Josh Forrest as starters, then simply go search for a free agent linebacker with experience.  But wait, here is an interesting choice for the Rams thats in search of a veteran linebacker who can secure the middle. A.J. Hawk, the once Green Bay Packers middle linebacker was released by the Atlanta Falcons earlier this week.  A.J. Hawk, can be a two down, and short yardage linebacker, and Ogletree can be shifted to the middle on third downs. I feel that this would allow Greg Williams to create more savvy blitz packages he signaled in with Laurinitis in the middle.

The Rams can use a overhaul at safety as well, by moving Maurice Alexander to strong safety and starting Cody Davis at the free safety spot. Davis has better read and reaction skills to the ball when its in the air than Alexander. It showed in the game against the Giants where Alexander should have either deflected or picked off a Manning pass that hung in the air for Odell Beckham Jr who jumped up and caught it setting up the game winning touchdown.  Dont expect to see the big hits from Davis but, you also will not see many receivers getting deep without him contesting on the ball every time there is an opportunity. TJ McDonald on the other hand, especially with his legal woes still pending, should be platooned with Alexander as well and be brought in as extra linebacker to help assist with run support. Once again, these are just my opinion that I see may help the Rams moving forward this season to make a wild card push.