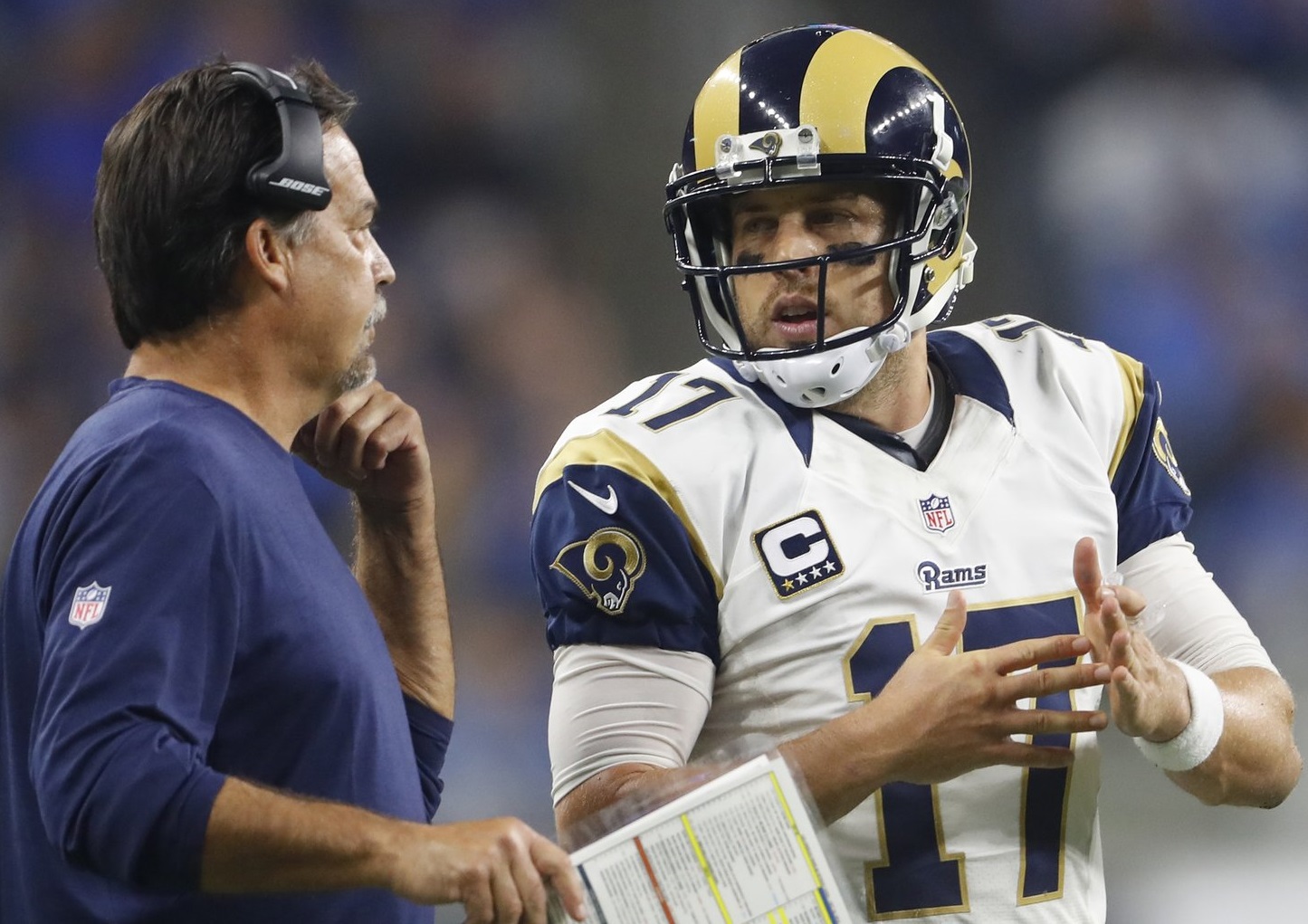 The Rams are heading into their much needed bye at 3-4 after blowing a quick 3-1 start on the season. Who is to blame for this three game slide? Well, many people are responsible but it starts with the QB and his Head coach.

For those of you who don’t know I have been supporting Jeff Fisher because quite honestly I think the Rams waited too long to fire him and have missed out on young Head coaching candidates like…Hue Jackson, Adam Gase, Todd Bowles, Gus Bradley, Dan Quinn, Mike Zimmer, Doug Pederson, the list goes on. I wouldn’t necessarily say I am advocating a firing of Fisher but I am saying this: If Fisher sticks with Case Keenum as his QB for week nine I completely want him gone.

Hear me out, I understand why Jared Goff hasn’t played yet. However, this isn’t about Goff entirely and Fisher seems to blind to realize that. For example this Fisher quote here is telling.

“Jared’s going to play when we feel Jared’s ready. Had we won this game you wouldn’t be asking about Jared, we didn’t lose this game because of the quarterback play. We lost it because of some other positions.”

This is the problem Fisher thinks Goff not being ready to start means Keenum is the starter moving forward. No, how about this. Give Sean Mannion a shot at QB, the fans are tired of Keenum and to be honest he’s not winning games anymore so you have no leverage other than the fact he had one great game versus the Lions which in all accounts was a fluke and even so didn’t lead to a win. Mannion could easily throw four interceptions like Keenum so how do you even have leverage to say Keenum is the guy after that game.

Lets take a look back at the previous QB’s benched by Fisher with the Rams and compare them to Keenum’s 2016 campaign.

Well, I didn’t understand moving on from Austin Davis as you may well know and I still never will. Just imagine what he could have done if he was on this team. This isn’t about my love for Davis this is about the fact Keenum has a good defense, running game is off to a slow start but he has talent and he’s not getting the job done. Again, while I want Goff to start week nine, if he’s not ready then let Mannion get his shot. Otherwise drafting him in the third-round was a complete waste.

Back at the beginning of the off-season around the draft Head coach Jeff Fisher and General manager Les Snead asked for Owner Stan Kroenke’s blessing in trading up to no.1 overall for California QB Jared Goff. Well they received his blessing and then they basically pleaded for time with the reason being that Goff isn’t ready. Kroenke has given them time, the fact of the matter is this. The Rams are 3-4 in a division they could easily be in front of had Keenum not lost them to out of the last three games. This is a team that should be making the playoffs in Fisher’s fifth year as HC. Kroenke might need to put his foot down and pull a “Jimmy Haslam” just like Haslam did with Pettine last year. “If you aren’t going to play our young QB then I am going to look elsewhere for a HC”. Now he was wrong because Johnny Manziel proved to be a bust on and off the field but my point is that it’s time to see what Goff can do.

It was all fine when the Rams started off 3-1 and Keenum was playing well enough with a good defense to win football games but now it’s gut check time. The Rams next four opponents have a 8-18 record combined and the Rams will be at the Coliseum also known as their home until 2019 for five times out of the next nine games. The Rams have a bye so they have two weeks to prepare to face the Carolina Panthers who are spiraling downward. This is plenty of time to get whether it’d be Sean Mannion or Jared Goff up with the one’s and getting ready to start. This is also plenty of time to sure up the running game and maybe even shake up the offensive line.

According to Fred Roggin of NBCLA it sounds like after years of mediocrity Jeff Fisher is on the hot seat.

Sticking with Case Keenum will lose Fisher his job at least if Goff is out there Kroenke and the rest of Rams brass might be accepting as long as they see the 22-year old under center. It’s time for Fisher to make a change though because starting Keenum moving forward is a death sentence to Fisher’s era with the Rams and maybe his football head coaching career.