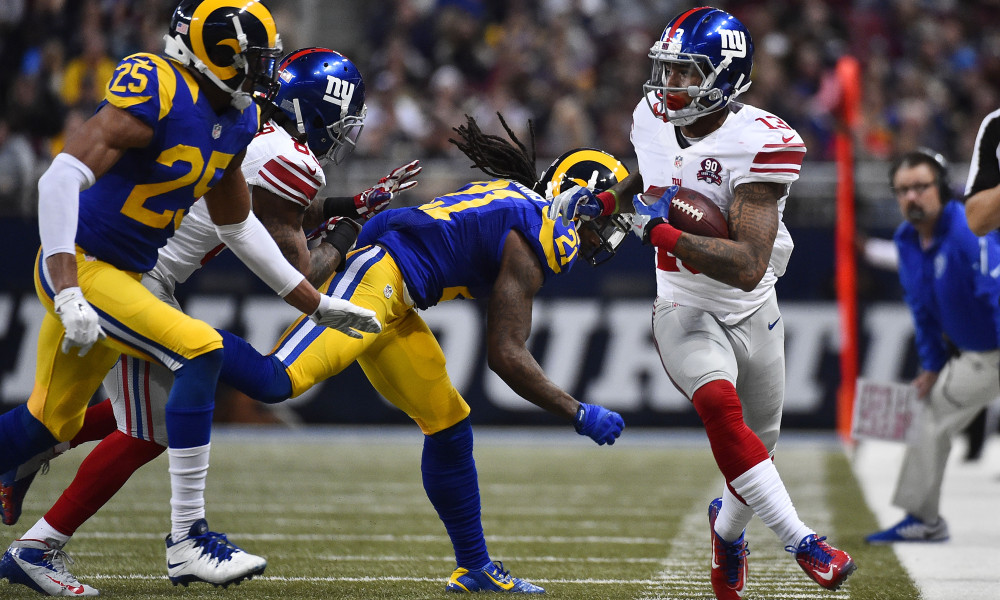 For week seven of NFL football, the Rams will host the Giants in the second installment of NFL football in London.  Although not much of a home game for the Rams, they will have the luxury of being called the home team in what is a rematch of a few years ago.  That game was very chippy and included a fight involving the polarizing Odell Beckham Jr.  We will preview some likely fantasy players for this weeks game.

Eli Manning has had an up and down year that has seen his team do the same.  However, with the Rams cornerback Trumaine Johnson out for another week, their secondary will have trouble dealing with the multi-talented OBJ.  There is a few details that could slow his big game, that being Odell’s attitude and the availability of Robert Quinn.  If Quinn is able to return and return with a vengeance it could be a bad day for Manning as he could be on his back a lot but as Stafford did last week, this Rams team can be picked apart if the quarterback is given time.  With the lack of a running game for the Giants, this game will be won with the arm of Manning and could also be lost with it.  His price is quiet high for daily fantasy but his matchup could be great or average based on outside factors, one thing I stay away from.  In league play there is many other options with better matchups.

OBJ as many call him has, like his quarterback, had an up and down year. As it is well documented, OBJ has been targeted by teams due to his weakness to giving into physical play.  However, this week, without Trumaine Johnson on the other side it may be a bad idea to fire up Beckham as the Rams do not have a corner who can battle with him physically.  The last time these teams played the Rams did just that and even with Janoris Jenkins, a now NY Giant, OBJ still went off for a big game.  Normally I stay away from OBJ due to his very inconsistent play and mental state but this week could be different due to the lack of health and depth in the Rams secondary.  In daily his price is still sky high but for league play plug him in with confidence.

Once again I’m highlighting an opposing defense facing the Rams.  Case Keenum has had a few good games in a row making this a little less of an obvious play but that is not something I would count on week to week.  With former Ram Janoris Jenkins manning one corner spot this could be another week that Keenum throws a pick six.  Although one thing that should be interesting is if the Giants play Coty Sensabaugh who played for the Rams a few short weeks ago and, if he does, do the Rams attack him as teams did when he was on their defense.  The price is very low for daily fantasy and has a very good chance to score points this week and should be in a decent amount of lineups this week.

Todd Gurley is becoming a dangerous play week to week as he has shown absolutely no reason to play him every week.  Last week against a very sorry Detroit defense, Gurley was unable to get going in part due to carries and in part due to his inability to see and take holes.  This week he faces another good matchup and should score double digits but as we’ve seen in previous weeks, until he gets back to his old self, he is no definite play.  His price is much too high for Fanduel but is decent on Draft Kings.  In league play there is a large amount of injuries to the RB position which makes playing Gurley much easier.  I would play Gurley this week if you feel this could be his week but without any confidence.

Who would have thought that at the beginning of the season that the most consistent Ram has been WR Kenny Britt.  Britt is nearly a guarantee to grab around 5 to 8 catches and over 50 yards while last week he scored his first two touchdowns of the season.  This week he faces a below average secondary that has been attacked with strong receivers so far this season.  I wouldn’t expect the same numbers he put up last week but somewhere right above his season average like 7 catches and 75 yards.  Fanduel has increased his price, as they should, while Draft Kings hasn’t making him one of the cheapest options out there.  There are a lot of options week to week in league play but I can promise that he is in nearly every one of my Draft Kings lineups due to his very low price.  Although there are options in league play, Britt is almost certainly available in your league.  Start him with confidence this week.

The Rams could be welcoming defensive end Robert Quinn back this week which would give the Rams some much needed help.  Not only will he assist Aaron Donald with double teams but he will also help the flailing secondary with added pressure on quarterbacks.  Now if Quinn is unable to go this week I would not play the Rams defense.  Their price is very low for daily fantasy and if only Tru and Brockers are out then this could be a strong week for the defense.  In league play I would be very careful about playing the Rams defense unless you are out of other streaming options.