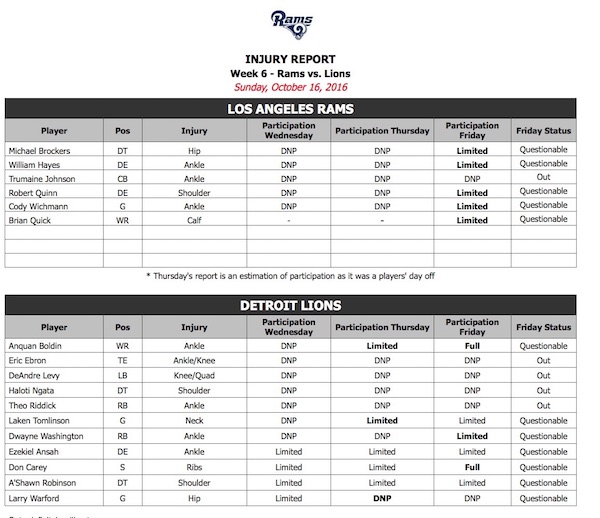 This week the Rams will travel to Detroit to take on the Lions in what will be a rematch from last years game between the two.  The injury report announced this week in quite lengthy, especially for Detroit but does not lack its fair share of playmakers.

In what has become a regular for Lions fans, the injury report is very lengthy and is loaded with talented playmakers.  Only WR Anquan Boldin, who has haunted the Rams since his days in Arizona, and safety Don Carey practiced in full this week and four have already been ruled out.  Riddick and Ebron’s absence will no doubt effect the game as both are quality targets for Matt Stafford.  While Ngata and Levy both shore up the middle of the defense, an area the team has been shredded at recently, and will also be missed by the Lions.  Robinson will more than likely play as no one has hinted that he will miss and with Ngata out he nearly must.  Pro-Bowler, Ziggy Ansah is still missing in action and it sounds as this will not be the week he returns as he has only recently starting running but his return would no doubt help the struggling defense of the Lions.  A main concern for the Lions is the injuries to both G Laken Tomlinson, who had a limited practice with a neck injury, and G Larry Warford, who didn’t practice all week.  If neither are able to go, it would leave rookie Graham Glasglow to deal with All-Pro Aaron Donald, a matchup he would be much outmatched in.  With the injuries to multiple RBs, the Lions will also press into action recently signed, Justin Forsett, who was cut by the Ravens last week and will likely play the majority of the offensive snaps this week as backup RB Dwayne Washington is also questionable.

All in all, the Lions are facing a ton of injuries on both sides of the ball and this week those injuries are at positions where the Rams have strengths such as guard.  With the injury to Ebron and Riddick, it practically leaves Stafford with only Golden Tate and Marvin Jones as his only viable pass catching weapons.  A lot will depend on the availability of the Rams defensive line, if they cannot go then that may be all the weapons the Lions need. 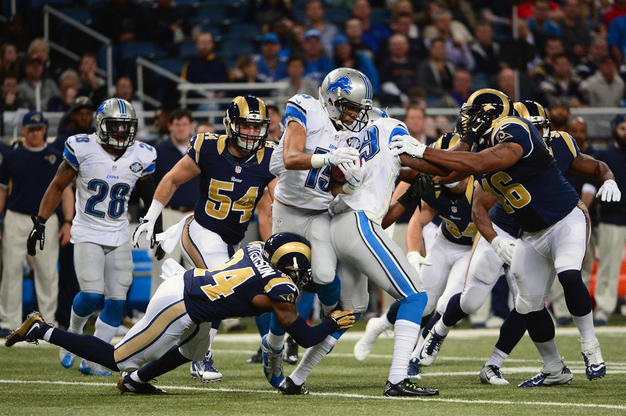 The Rams have a lengthy injury list themselves but what is so damaging for them is the fact that their injuries are focused in just a few areas creating depth issues.  As it is known, Trumaine Johnson has already been ruled out this week leaving EJ Gaines to man the number one corner spot which moves Troy Hill to the number two corner.  Hill has been decent but the loss of Johnson takes away a player on defense who can take the ball away and will force the defense into more zone than man leaving the linebackers to cover more.  The trio of William Hayes, Michael Brockers, and Robert Quinn seem to be progressing and it is likely that one of those three if not two of them will be back this week.  One that likely will not is Hayes, who said in an interview this week that he is unlikely to give it a go this week.  Although Quinn is a Pro-Bowl caliber player, it is likely Brockers is the most important on the line this week as the Rams were shredded last week on the ground due to his absence.  Brian Quick was a late injury designation with a calf injury and will likely be a go this week but if he cannot it will open the door for Pharoh Cooper to get added snaps after his debut last week.  One thing Quick does not want to do is give up a chance to start after he has reclaimed his roster spot.  Last but not least, Cody Wichmann, who was injured last week got limited work in this week and will be a game time decision as all the other designated players will as well.  With a little under 24 hours left before kickoff we could be surprised and have our full roster healthy this week.

Overall the Rams are slowly getting healthier this week and could only be without Johnson and Hayes as all others look positive going into the weekend.  The biggest thing for the Rams is the absence of Kenny Britt and Benny Cunningham this week which should provide some stability for the offense.  If the Rams can get Brockers and Quinn back this week the defensive line could begin to take shape again and cover for the loss of Tru as all eyes will be on Troy Hill this week.