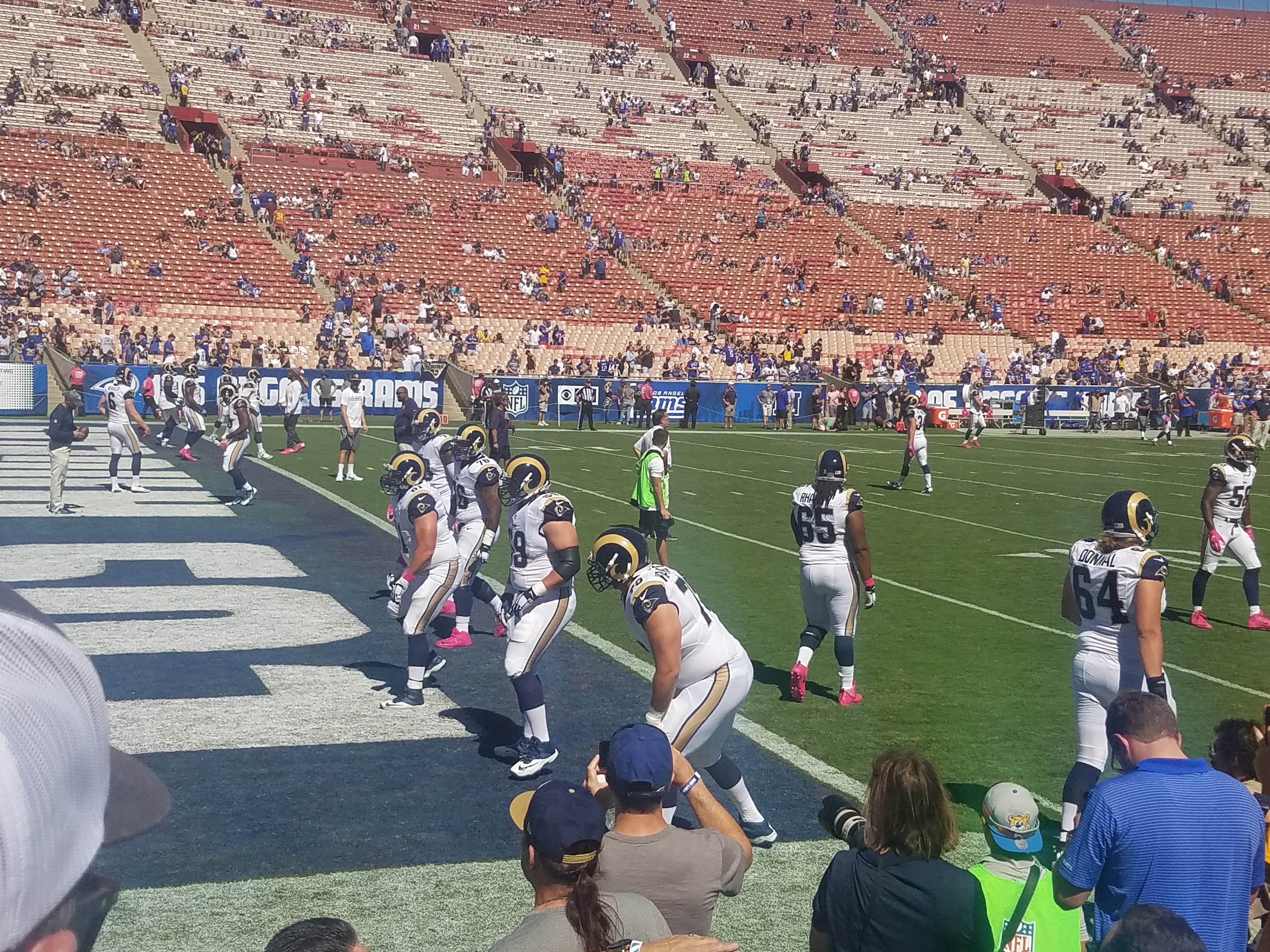 There is a great deal of a “hoopla” circulating in the air, and many demanding for the removal of Head Coach Jeff Fisher and his staff, however, Fisher does have the support of a few fan base that agrees with Coach Fisher and the direction the L.A. Rams are moving. Simple way to address the issues is that Coach Fisher is not on the playing field on game day, and nor can he go out and play for his players. However, it is the players responsibility to carry out the coaching techniques and teachings by executing them on the playing field.

Specifically speaking, I’m identifying and addressing the offensive line in particular! I say this, from my observations and analysis , the ultimate problem with this L.A. Rams offense is the O-line and its offensive line coach, Coach Paul T. Boudreau.

When Boudreau was the O-Line Coach for the Rams in 2006, S-Jax (Steven Jackson) rushed for over 1,500 yards that season. When Boudreau was coaching in ATL, Michael Turner nearly rushed for 1,700 yards in 2008, as well as the next two seasons, Turner rushed for over 1,000 yards. However, Boudreaux was fired, as well as a reoccurrence with him in Carolina, Miami, JAX, and with his second stint with the Rams in Los Angeles. The firing of Boudreau simply was because his run blocking success, in which led to career highs for running backs, but his offensive lines also led the league in allowing high number of sacks! Talented runners under the regime of the o-lines Boudreau had coached were, Barry Sanders, Curtis Martin, Thurman Thomas, and Fred Taylor.

Since 2012, with Fisher hiring Boudreau as the offensive line coach, the offensive line woes has continued, given up over 136 sacks, which averaged out to 27.2 sacks per season. If its any consolation, two of those season of the Rams were decimated by injuries to the offensive line, in which the Rams were hiring players that were coming out of retirement to play. At this alarming rate, there is no offense in the league that can stand a chance to survive with averaging these amount of sacks and also relying on the run game.

It is now 2016, and guess what people, the run game is just simply not getting any better and the passing game has been hindered, with inconsistency and the inability of our offensive line to protect the quarterback from repetitive pressure. Do your homework and view the statistics. Five games into 2016, Case Keenum has already been sacked 12 times this season, of these sacks, three have resulted from 3rd down and less than 2 yards of converting a first down.

In the 2015 NFL Draft, the Rams had a plan to draft running back Todd Gurley.  Having numerous amount of draft picks that they acquired via trades, the Rams was set to launch a run game which led to Gurley being selected as the rookie of the year.  Fisher and his staff stockpiled the draft by selecting offensive linemen in the second, third, fourth, and sixth rounds of that 2015 draft. These draft picks were Rob Havenstein OT, Jamon Brown OL, Andrew Donnal OL, and Cody Wichmann OG, with both Havenstein and Brown starting on the right side of the offensive line. Brown’s season was cut short due to a broken leg and Havenstein’s season was hampered with nagging injuries. Wichmann ended up replacing Brown after his season ending injury, but, as well as this season, because of Brown’s ineffectiveness in week one against the San Francisco 49ers. Unfortunately, Wichmann game was cut short early in the first quarter yesterday  against the Bills sustaining an ankle injury.

In that 2015 season, the Rams offensive line surrendered up 21 sacks, and it’s my opinion, that total may have been higher of a number, had it not been for the athletic ability of Case Keenum escaping away from many potential sacks. Do the math, its not rocket science, I simply believe that Boudreau coaching ability and teachings have surpassed him. These offensive lineman are getting beat to their spots on the field,in which they are making unnecessary penalties. His system is no longer effective with the run game as well as the passing game, with that said, his oppositions, (the defensive coaches) have outsmarted his style of coaching. It is eminent that Coach Boudreau be removed, if he his not, I’m afraid that these offensive woes will continue to have a downward spiraling affect.

But, this is just my opinion!

Is it time to start a complete shuffle of the Rams O-line?