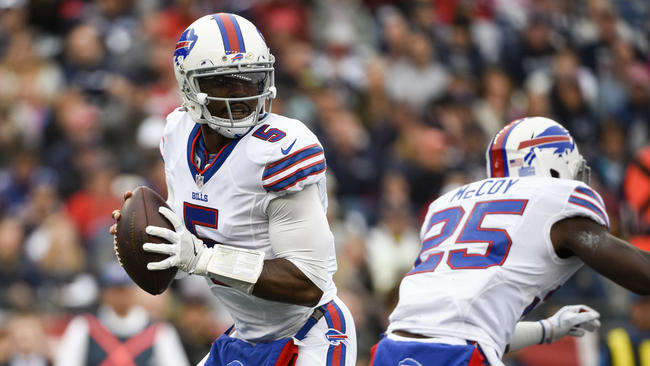 The Buffalo Bills traveled to Los Angeles to take on the Rams in what was expected to be a low scoring defensive battle.  The Bills took home the victory and as we will revisit the three key match-ups it will be easy to see why.  Next week the Bills will face the lagging 49ers and the Rams will travel to Detroit to face the 2-3 Lions.

The news about this match-up was bad from the start for the Rams as three of the four starters on the defensive line for the Rams were out, including Robert Quinn, William Hayes, and Michael Brockers.  The Rams started Aaron Donald, Cam Thomas, Eugene Sims, and Ethan Westbrook and the lack of starters showed early in the game.  McCoy was able to play even after his late injured hand designation and he and Tyrod Taylor were able to run all over the Rams defense early in the first half.  McCoy had a 53 yard run that crippled the Rams and showed that although Quinn is a massive playmaker, Brockers may be the most important lineman other than Aaron Donald.  As the game went on, the Rams did stiffen up on their run defense but McCoy still made a few plays in the second half after a late game pick six that ultimately helped the Bills to the victory.  Although it didn’t amount to many yards, Taylor’s running ability and elusiveness killed the Rams pass rush as he eluded pressure and made throws that helped the Bills increase their lead.  Overall this key match-up was owned by the Bills and that was evident as McCoy nearly rushed for 150 and, although sacked, Taylor was able to make the throws that counted on 3rd downs that held off the Rams defense.  On the positive side for the Rams, Domique Easly looks like a great pickup for the team and is a great rotation piece.

Todd Gurley got going with a few catches early in this game but didn’t help the team with an early fumble that ended the first quarter.  Gurley was able to get some slight running room compared to the first four games but still didn’t crack the 100 yard mark and was relatively bottled up again.  The Rams added another wrinkle with a wildcat formation but only ran one play in the formation that lead to a decent gain on the ground.  This was by far the best game for Gurley, as he did help the Rams get points with some good plays but ultimately this match-up was still a win for the Bills as none of them were back breaking or looked as easy as the runs for McCoy did.  The backers for the Bills were as advertised as they made plays and didn’t miss many tackles during the game.  At this point in the season, Gurley will have a much better lineup of defenses but without Keenum completing easy long passes teams will continue to load up on Gurley and live with the results. Outside of the previous two games, the results have been lacking for Gurley and the Rams.

This was possibly the most important match-up of all and for most of the game it was even but when that changed was when Case Keenum threw a decisive pick six to a former Jeff Fisher draftee, Nickell Robey-Coleman.

The only turnover before that point was a Todd Gurley fumble in the first quarter that was surprising but didn’t lead to any points.  The Rams were winning the field position battle early as they started beyond the 30 yard line multiple times and the Bills started inside their own 20 multiple times as well.  The Bills punter, Colton Schmidt, was smart in avoiding electric punt returning Tavon Austin and continually kicked his punts to the sidelines.  As I stated above, the biggest mistake of the game was the pick by Keenum as it was a close throw but one a veteran quarterback should avoid when the game is as close as it was.  The throw lead to another pick six for Keenum marking his second of the season, this one too much for the Rams to overcome.  The Rams Johnny Hekker was once again great for the Rams as he gave the Bills nothing in the return game and pinned them deep most of the game. Another Schmidt positive was the fact he pinned the Rams inside their own 20 for both of their last possessions, neither possessions leading to points. The second worse play of the game was by and far the fourth and five play call to fake a punt and run with Bradley Marquez.  The fake lead to points for the Bills and ultimately did the Rams in.  The fake was a rather peculiar call with the Rams playing relatively good defense at the time.  I give Fisher credit for having the guts to make that call but in terms of if he should have, that is another story.

All in all, the Bills won every one of these match-ups and it showed with the victory.  The Rams were putrid in stopping the run early in this game and couldn’t force turnovers despite giving up a few of their own.  These mistakes ultimately did in the Rams as they return to 3-2 for the season while the Bills also go to 3-2.  If the Rams continue their bad run defense, their bad rushing offense, and continue turning the football over, then this good start to the season will be just a mirage as they plummet to the bottom of the NFL.  Next week presents a winnable game against a team that can’t stop the run and turns the football over.  If Gurley can’t get going against the Lions, that is when I will truly be worried about this football team.

Five Rams to watch vs. the Buffalo Bills

Ten Takeaways from Rams 30-19 loss to the Bills