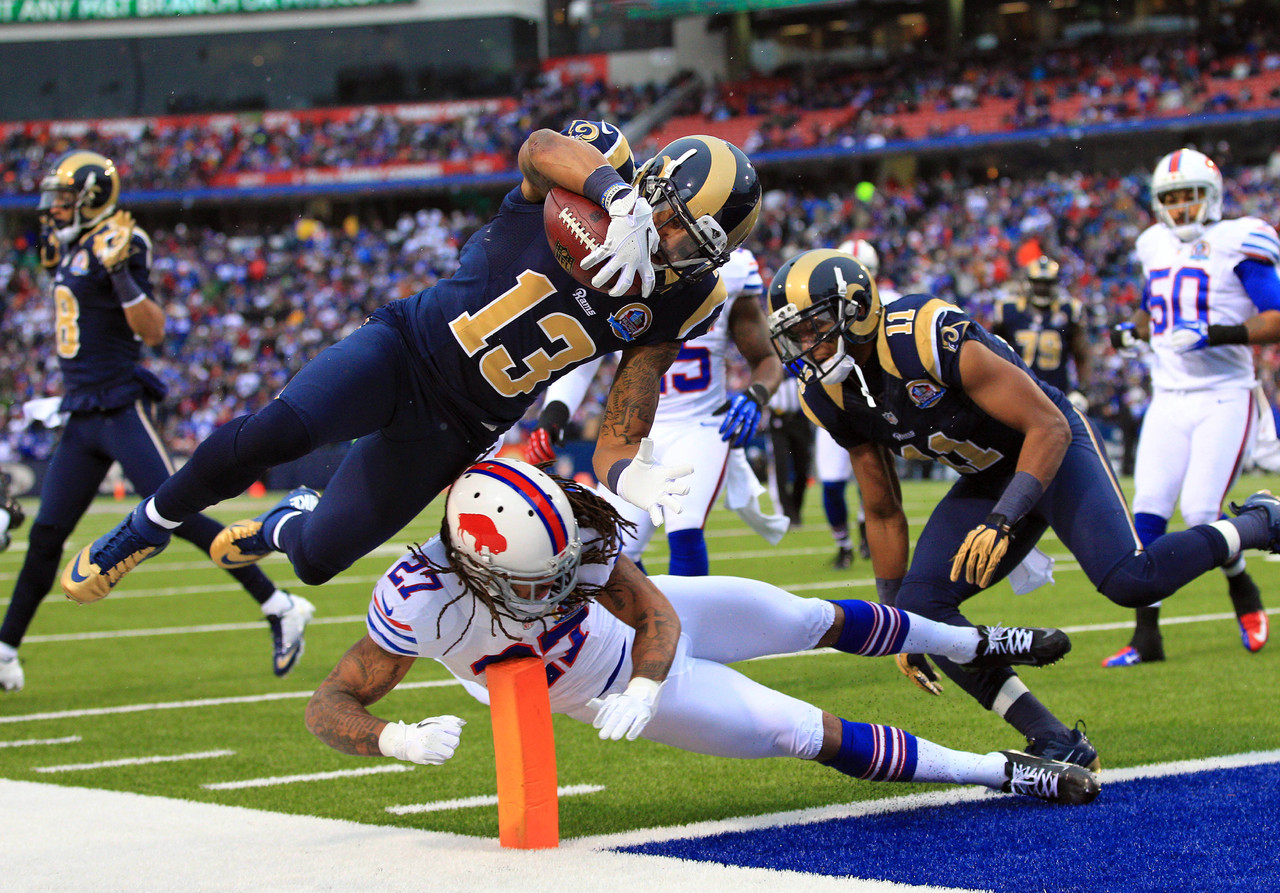 The blazing 3-1 Los Angeles Rams take host to the equally-as-hot 2-2 Buffalo Bills for a showdown in Hollywood. This match-up contains intense implications for early playoff pictures going forward. Playoff talk in week 5? Yes. For these recently-struggling teams who’ve both caught a hot streak early in the season, the ‘P’ word has been thrown around a little bit. With an important divisional win against the always-competitive Seahawks, followed by two straight road wins versus promising teams such as the Bucs and division-rival Cardinals, the Rams look to continue their winning ways. The Bills recent picture looks quite similar, as they defended New Era Field against a once-contending Cardinals team, and walked out of Gillette Stadium with a divisional victory. Something will have to give.

In terms of passing yards per game, the Rams rank 30th through the first quarter of the season. After getting off to a slow start the first two weeks, Case Keenum and Co. have been able to find better rhythm and space in the passing game, which has greatly contributed to their three game win streak. If Todd Gurley can’t start hitting the holes that the offensive line has been creating for him, Keenum may have to continue carrying the offense. Though he has only been sacked 7 times, which is tied for 10th best so far this season, he will face another tough task this weekend, with Marcel Dareus returning for the Bills. They are currently 3rd in the league in sacks, and are allowing a lowly 79.2 QB rating, which is good enough for 7th in the league. With the play-action pass and reliable weapons such as Britt, Kendricks, and Tavon making game-clinching plays for the Rams, finding a hole or two in this talented secondary will be key to taking over the game.

This is the area in the game that could make or break a victory for the Rams. Not necessarily the arm of Tyrod Taylor, but it’s the legs of the incredibly quick and shifty quarterback that has me concerned. On one hand, our athletic front seven (assuming all but Hayes, who looks a little banged up, play) we match up very well against quicker, faster offenses. Containing Tyrod on scrambles and screens to McCoy won’t be easy, but we have the pace to do it. On the other hand, Blaine Gabbert showed us where the holes were in front of the entire nation on MNF, and put our defense in vulnerable situations. If Greg Williams can pull a few hidden plays out of his bag of tricks and force Tyrod to make a questionable throw or decision, that may be all we need to squeak by with the advantage in this game. If there were a match-up I would consider the x-factor, this would be it.

I try to remain as non biased as possible when writing about the beloved Rams, but sometimes it’s tough, especially when it’s a topic I get excited about. Yes, the Bills come in with the 7th ranked rushing offense at 123 yards per game. Yes, the Rams are a mediocre 16th at stopping the run, allowing just over 100 per game. On paper, are we favored? No. But this particular match-up excites me for the Rams defense. I considered the Bills passing O versus the Rams passing D to be the x-factor, but stopping the Bills rushing attack is key to achieving the victory in the passing game.

As I mentioned before, the Rams front 7 is scary on both ends of the spectrum. They play 100 mph and are not scared to project themselves towards the ball carrier. They have a “bottle up” mentality and are able to trap ball-carriers in the backfield. If they can set the tone early on and contain McCoy and Tyrod within a couple yards of the LOS, this could be a momentum-changing match-up.

The only thing that scares me is becoming too aggressive to attack the run in the backfield that the blitz is abused on screens. Beware.

This is a match-up that does not favor the Rams coming in to the game. With the Bills getting Marcell Dareus back from suspension, and Kyle Williams playing well in his absence, the Bills have mammoths up front that could prove trouble for the 50 or so dive plays that Boras has up his sleeve. Add in the Brown brothers at linebacker, and defensive backs that aren’t afraid to hit, and this could force us to pass early on.

It’s absolutely important to get Gurley going, which has been easier said than done as of late. If TG3 stays below the 3 ypc mark another game, it could spell doom for the turnover battle, as this is an aggressive and opportunistic D who thrive on disguising blitzes and taking advantage of a flustered QB, as Keenum has shown he can be. The Ryan brothers are looking at this match-up as a must-win, and if previous games are any indication of what this offense will be doing, the Bills may have the upper hand here.

There’s not too many games where the opposition will have the upper hand in this match-up. The Rams have constantly focused on field position, and in my opinion, it is an underrated entity in gaining advantage of any game. Hekker will do Hekker things, pinning the Bills inside the 15. Tavon Austin has shown that he can be a game-changer with 30- and 40-yard returns, setting the Rams up for a short field. LA will have the kicking facet of this unit ready to go, but if Tavon can show up and do what Tavon does, the Rams could blow this one up.

Again, while trying to remain neutral-minded, and understanding that both teams are riding serious momentum at this point in the young season, I have a tough time imagining the Bills winning this one. The Rams, backed by an electric LA crowd, force an early turnover, go up 10-0 by the end of the first.

But TG3 gets it going, scoring twice in the 4th, and the Rams take the W