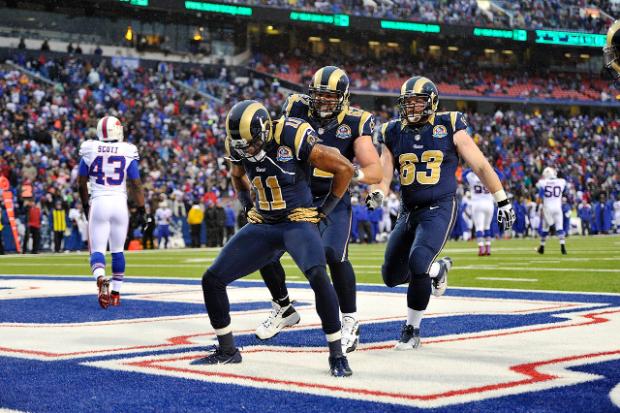 This week the Buffalo Bills will visit the Los Angeles Rams after winning two in a row including a shutout of the New England Patriots.  The Rams are on a winning streak of their own and will look to continue it against the Bills and their strong running game.  Once again, us a Downtown Rams will preview the fantasy outlook for both teams as they look to battle in week 5.

Tyrod Taylor is a roller coaster of a passer but his involvement in the running game makes him a pretty steady quarterback for fantasy play.  This week however I would venture carefully about expectations for Taylor as the Rams have a knack for slowing down running quarterbacks, ask Russell Wilson, and with their stout defensive line should bottle this area of his game up.  In league fantasy however, he could provide a decent spot start for teams with quarterbacks on bye weeks such as Drew Brees.  If the recent McCoy hand injury is anything serious however expect a few more passes and a lot more of quarterback runs this week.

For McCoy this week was going to be a tough one regardless, now that he has been listed on the injury report for a hand injury I personally would look other places for daily fantasy.  This injury does seem to be a little overblown as Rex Ryan’s body language may have shown but with other daily options that are much cheaper, McCoy is on the bench for me.  In league play he may still be a starter due to lack of options and in PPR he could still give double digits with his pass catching ability.  All in all, McCoy was slated for a tough game this week and his lack of clarity on the hand injury makes him a risky fantasy play in any formats.

Former USC Trojan, Robert Woods will return to the Coliseum this week and after last weeks showing in which he caught a good amount of balls and gave nearly 100 yards.  Woods is a decent play in Draft Kings as his price is still reasonably low but in Fanduel it may be a little high.  In league play Woods should be sat unless you lack receiving threats.  In that case I recommend picking up Steve Smith who has a great matchup this week and is owned in very little leagues.  Overall, Woods is a decent play in daily, not so much in league play.

As most teams that face the Rams, the Buffalo defense is a stream play this week and as Case Keenum has shown he is susceptible to throwing interceptions.  The Bills just came off a week where they shut out the Patriots and will also be adding all-pro tackle Marcell Darius back to their front.  With the emergence of the Buffalo linebackers this season, running could be tough for Todd Gurley.  Expect a low scoring game this week and one that will likely be decided by turnovers.

At this point, any Todd Gurley fantasy owner should be worried.  Gurley has a lighter schedule in the coming weeks but at this point has shown us no reason why that should help him.  Teams are loading the box and with his lack of patience, he has not been able to find holes to run through.  Gurley is still priced rather high on every daily fantasy site and for league play he is almost a must start due to the lack of other options.  The “you must start him due to his draft position” is over and now Gurley is a matchup RB until otherwise.

Kenny Britt is quietly becoming a solid fantasy player this season.  Although he won’t score 20 points at any time this season, he has averaged a solid 7 points per game and is on pace for 1000 yards receiving for the Rams.  This week the Bills are missing one of their starting corners and Britt could take advantage if he can overcome a thigh injury that slowed him last week as well.  On Fanduel his price is a little high and if you own him in league play you must be crazy but in Draft Kings he is a decent spot start and although it takes a certain amount of craziness, Britt may be a good play this week.

This is the unit I’m using this week due to the matchup the Rams have on the Bills.  They’ve faced mobile quarterbacks like Taylor and shifty RBs like McCoy just don’t scare me with this defense due to the high speed and athletic ability of the linebackers.  If McCoy’s injury to his hand is serious it could mean a few fumbles for McCoy against a team that has a penchant for creating turnovers.  This paired with what is expected to be a low scoring game, I’ll take the Rams in every game type, daily and league play, this week and use their low cost for other positions.

This game will be a low scoring battle of defenses and it is not expected to have many offensive performances that will knock your shoes off but don’t be surprised if one of these defenses scores in the high teens this week and carries their team to the victory.