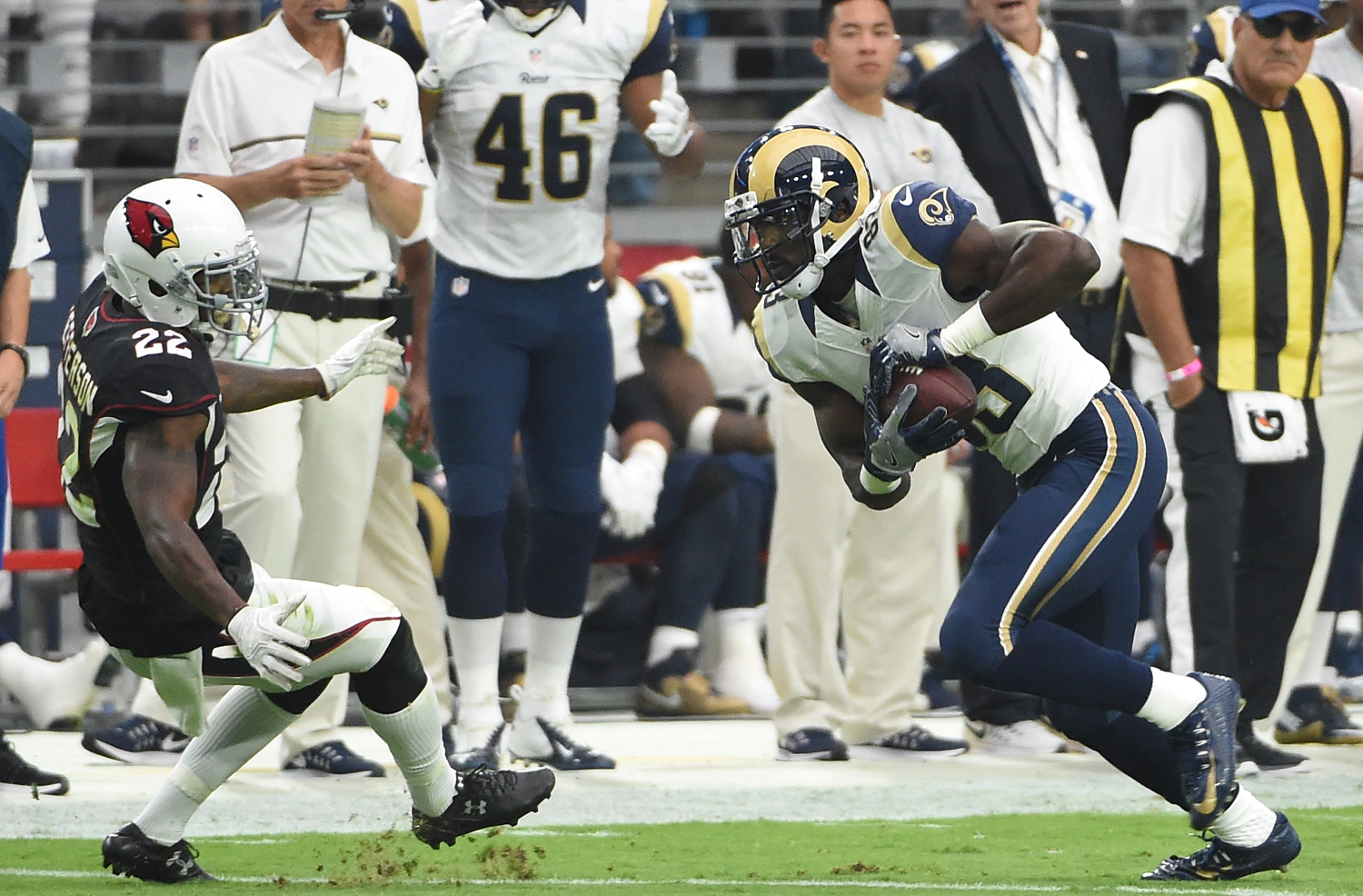 We learned quite a bit from this Sunday but, WR Brian Quick catching two touchdowns in this contest and LT Greg Robinson negating some serious yardage with penalties and is his lack of techniques left us with hope and concern.

First off lets start with the good news. Quick might be ready to become the no.1 WR the Rams have been vying for him to be for awhile now. I am one to always admit when I make a mistake so if Quick continues to play this well moving forward I would definitely say I was wrong about him. Quick has eight catches on 14 targets for 153 yards and three touchdowns. Another thing, Quick is averaging a whopping 19.1 yards per catch which makes him an early candidate to be the Rams big-play guy.

Quick still has a long way to go and it’s going to be interesting when Nelson Spruce and Pharoh Cooper come into the offense but for now Quick has three touchdowns in two games and perhaps his last two games were the boost he needed to get going. Quick has some serious size (6-foot-3) and speed to take it to the house as you saw yesterday. The drops are still going to be a factor with him but yesterday and the week before he looks to be turning his career around and the Rams are going to need him to continue to do that.

On the flip side of things and the bad news is the fact the Rams no.2 overall pick in 2014 is starting to look like he will never become a franchise left tackle. Robinson was horrific yesterday, just absolutely atrocious. It’s in fact worrisome because the Rams offensive line isn’t exactly great with him or without him. The lack of technique from Robinson is causing him to get beat play by play. He’s now ranked last in all tackles not just left tackles, all tackles in the NFL per Pro Football Focus. It’s getting to the point the Rams might want to shake things up and move Robinson back inside at guard and try LG Rodger Saffold at left tackle or maybe even RT Rob Havenstein and try to move Robinson to right tackle.

Bottom line is that the Rams are winning but they are in a pickle with their offensive line playing so lackluster. Robinson shows potential here and there with a nice block or two on a run but at the end of the day it’s his technique in pass protection that completely destroys him. His inelgible man downfield penalty on the 27-yard magician-like play by Keenum left a bad taste in Rams fans mouths. Keep in mind where they are during that play the Rams are down 10-13 with 11:05 to go in the game on that play they get it down to the eleven yard line and would be knocking on the door to score and at least tie it up with a field goal. Robinson gets the penalty that erases that great play and ultimately leads to a Rams punt. Now the Rams won this game but that is a crucial play that absolutely killed a score in some capacity on this drive. That’s not even including the great by Keenum that put the Rams again in the red zone only to turn in a stalled drive and a punt because the run was called back on a Robinson hold that had no effect on the play.

The fact of the matter is this, the Rams can’t afford to have these miscues from their former no.2 overall pick who has killed the Rams in “replacement cost value”. They drafted him over the likes of Pro Bowl DE Khalil Mack, WR Sammy Watkins, OT Jake Matthews, WR Mike Evans, Pro Bowl LB Anthony Barr and Pro Bowl WR Odell Beckham Jr. This pick has absolutely shot the Rams in the foot as they could have had any one of these players and they would have made a huge difference. Instead, the Rams have Robinson and while they hit a home run on Aaron Donald at no.13 who is the best player from this draft. The Rams could have really taken over had they drafted Donald and one of the names mentioned above. Any one of them made sense because if you look at Mack, yes he may not be a need but would you hate it if it was him on the edge with Robert Quinn? No. Watkins isn’t my favorite receiver but the Rams could use him since they lack the WR talent the rest of the league has, Matthews was the same position as Robinson but has had a better career. Mike Evans would have have offered a giant no.1 target for rookie-QB Jared Goff down the road. Anthony Barr next to Alec Ogletree and Mark Barron might not even be fair. Odell Beckham Jr. is a top five WR in all of football so the Rams really could have used him. However, the most obvious one at the time was drafting QB Blake Bortles. This season Sam Bradford would end up tearing his ACL and the Rams would start Austin Davis and Shaun Hill who they would get rid of the next season. Bortles would have made sense due to the fact Bradford was injury prone and his contract status remained a mystery.

For Robinson the clock is ticking, he needs to get it together fast because his play could hurt the Rams in more than just their success but also hurt their QBs. If Jared Goff is the starter this week or next year the Rams will still have Robinson protecting his blind spot and that should terrify any Rams fan and the Rams coaches if he doesn’t fix himself soon.

For the L.A. Rams, the sky is the limit

Rams 3-1 start gets minimal attention : A look around the media's power rankings