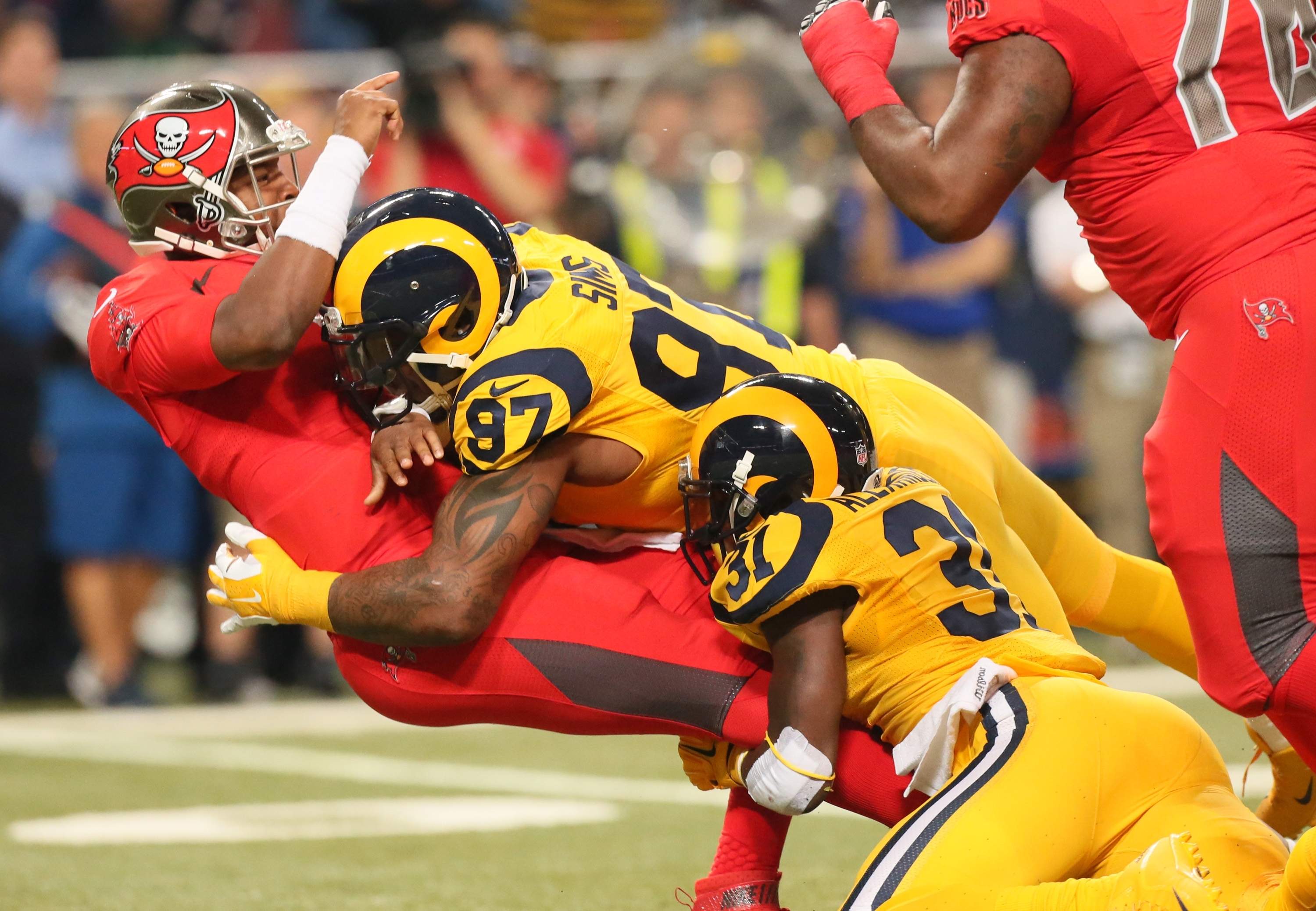 Tonight the Rams took home the victory against the Buccaneers in Tampa Bay in what was a surprising shootout.  The game had multiple ups and downs and even faced a delay as there was weather in the Tampa area that was deemed dangerous.  We will revisit the 3 key matchups that were highlighted by us here at Downtown Rams and how they effected the game.

The Rams were in fact able to score their first touchdown of the season, in fact they scored five touchdowns.  Although they didn’t get Todd Gurley over a hundred yards this week they did get him in the endzone twice.  The Rams shut down Gerald McCoy for most of the game except for a few plays but in the case of the star linebackers, David and Alexander, they were able to make plays most of the night including a interception return by Alexander.  For the Rams the game really opened up when they were able to complete some deep passes to Quick and Britt and that was able give Gurley much more room than he has seen all season.  All in all this was a win for the Rams and Gurley and ultimately was second fiddle to the passing game.

Although Charles Sims had a decent day running the ball, he was not able to break any big runs and was relatively stuffed at the line.  Yes if you look at the box score, the Rams did not sack Winston more than a couple times but when looking at penalties by the Bucs offensive line it becomes evident that the Rams defensive line still had an impact.  The Rams were able to force the Buccaneers into long third downs but on those third downs Winston was able to complete passes to get first downs or come close to doing so.  The Bucs were able to keep Winston off his back for a lot of the game but did so because of quick passes and quick decisions by Winston including his scrambling ability that didn’t lead to rushes but extended the play long enough to throw down field.  Even though the Rams didn’t get the sacks we wanted, they were still able to win this matchup based on the drive killing penalties they caused the offensive line to commit.

Vincent Jackson was relatively quiet for this game but Mike Evans once again showed why he is an elite receiver in this league while slot man Adam Humphries was able to catch multiple passes that lead to first downs and decent gains.  We stated before the game that this matchup may have depended on the aforementioned matchup in the trenches but it was not and Winston was able to win this one despite one jarred pass that was intercepted by former Buc Mark Barron.  Something else I was disappointed in was the absence of cornerback EJ Gaines for another week.  This was the week I thought we would see our hopeful savior at the second CB spot but once again he was no where to be seen although Troy Hill had another serviceable game.  Something that was not as used was also the four safety look the Rams showed the Seahawks which may be attributed to the more pass happy approach the Buccaneers use.

The Rams were able to win two of these matchups but the receiving group for the Buccaneers was able to show their ability as they kept the game close for all of the game.  Paired with Winston this offense should be one of the top offenses for the foreseeable future.  With the Rams winning the battle in the most important area of the field however, the trenches, they were able to take home the victory and continue their winning ways into week four.

Watch out NFC West there's a new sheriff in town?