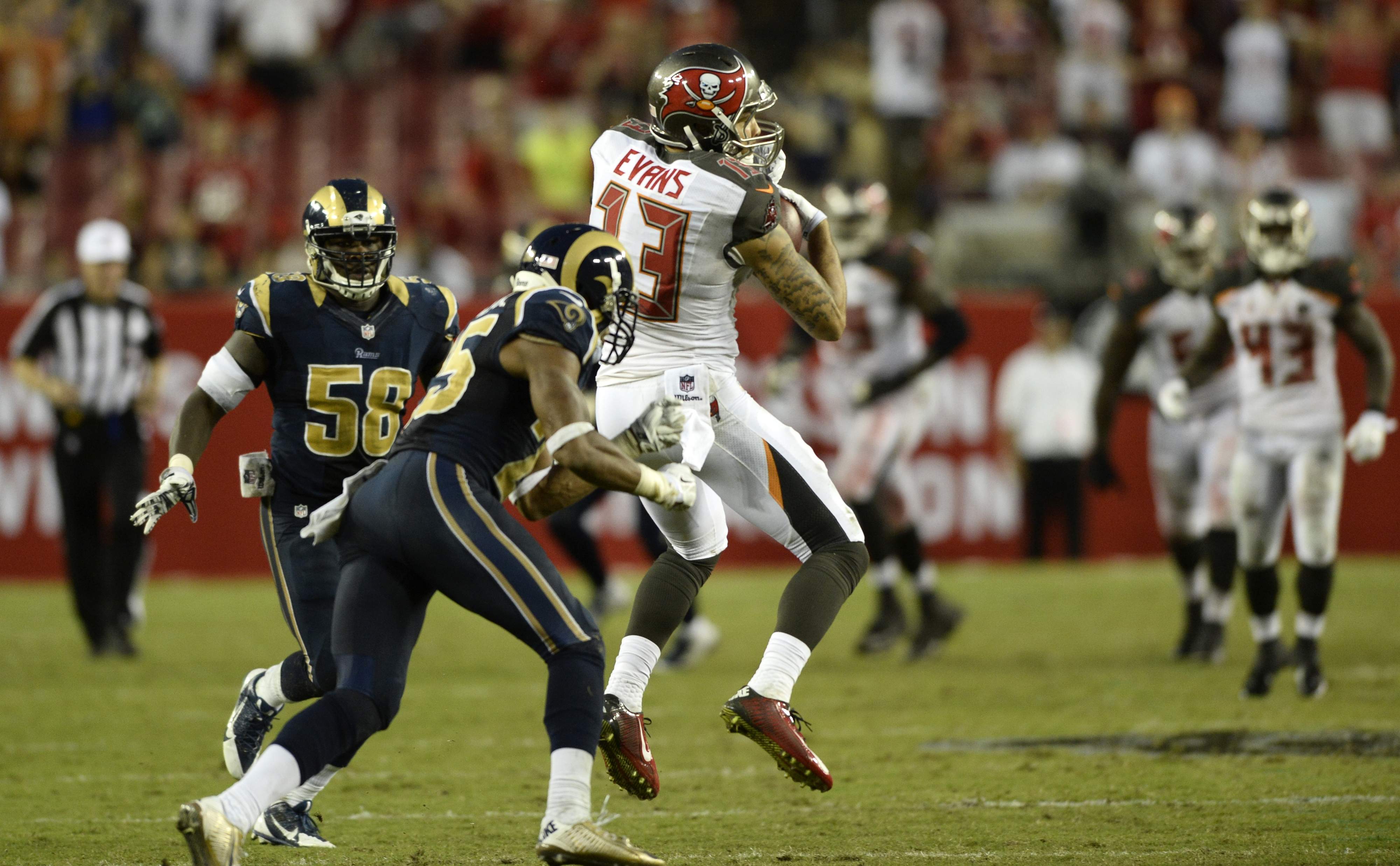 This week the Rams went to Tampa Bay to face the Buccaneers and took home a victory in what was a surprising high scoring game.  The Rams will go into week four at 2-1 with a share of the NFC West crown while the Bucs will finish the week at 1-2.

Jameis Winston is the Future at Quarterback

Jameis Winston showed this game why he is the future of the NFL at the quarterback position and why he was the number one pick of last years NFL Draft.  Although the Buccaneers lost this week it was not for lack of effort from the always firey Winston.  Winston did have some missed throws but when you throw it over 50 times while taking hits, missed throws will happen.  This game was another example that the Rams may have took a quarterback number one, one year late, but only one time will tell.

Buccaneers kicker Roberto Aguayo was a highly touted kicker out of the same Florida State University as Jameis Winston but his career has gotten out to a rough start.  His missed extra point and field goal cost the Bucs as they stalled out in field goal range with time running out needing a touchdown.  If Aguayo had converted those four points the field goal would have won it for the Bucs but the second round draftee once again disappointed.

Rams wide receiver Kenny Britt once again had an early drop that cost the Rams a first down and on the following drive fumbled a caught pass that lead to six points for the Buccaneers.  However, Britt, who was visibly angry at himself, then started to take over for the Rams on the outside.  Britt was able to cause multiple secondary penalties that helped sustain Ram drives and once again showed that he is in fact Case Keenum’s favorite target.  We will continue to monitor this but if Britt can continue his strong play he could finish as the first Rams receiver to finish with over 1000 yards in over a decade.

Greg the leg once again had a strong game and looks as though he will continue to be most of the offense for the Rams this season.  Last season looks to be an outlier and it may be the year of legatron.  If Zuerlein can continue his strong play the Rams may be more comfortable with Keenum being unable to move the offense down the field.

The Rams once again started Cody Wichmann at RG and once again played admirably.  Although the line didn’t create massive holes or great push they did give Keenum enough time to make solid throws to his receivers.  This was the kind of line play the Rams have been seeking as they did not have many penalties that stalled drives and were able to keep Keenum clean.  If the Rams continue to have good play from the line without penalties, they could continue their offensive scoring they displayed this game.

Keenum Plays Good and Makes Good Decisions for the Most Part

For Case Keenum this was by far the best game he has played this season and it was not completely surprising as he played well against the Buccaneers last season.  Keenum was able to get enough time to make sound decisions and got the ball out quickly to avoid sacks.  Except for one bad throw that lead to a pick six, Keenum was able to do the things that were needed to win the game.  If Keenum can continue his sound play it may be even longer before we see number one overall pick Jared Goff.

The Rams offense got going against the Bucs and looked far and away better than they have all season.  They were able to score their first touchdown this season on a pass to Brian Quick who may have saved his job today, two from Todd Gurley, and another from Tavon Austin.  This game came at a perfect time as the Cardinals, next week’s opponent, was shut down.  If the Rams can continue to build off this strong play there could in fact be a playoff berth waiting on the Rams at the end of the season.

Joyner Continues his Strong Play but Secondary still has Questions

LaMarcus Joyner was able to turn in another strong game although it sounded as though the Buccaneers came into the game looking to attack Joyner.  Although Joyner played a good game and Trumaine Johnson also made a few plays the secondary once again missed EJ Gaines.  This will continue to be a trend of conversation until we see Gaines actually on the field.  In what was an up and down day for the Rams secondary they were able to somewhat hold down Mike Evans and the pass catchers for the Bucs no matter the 350 pass yards on the stat book.  Most of the yardage give up was on prevent defense during the last quarter where the Rams had a two score lead.

The Rams began the game by losing William Hayes to an ankle injury for a quarter and subsequently losing Eugene Sims for the game after an ejection. Brockers was also knocked out of the game for a few plays and when he returned was sporting an elbow brace.  Although the Rams didn’t create a ton of sacks they did get decent pressure on Winston, however Winston was able to create time with his legs and throw downfield.  One of the biggest plays of the game was the strip sack by Robert Quinn that was returned for a TD by Ethan Westbrooks.  Even though the Rams didn’t get the sacks this game their effect was still evident with the many holding and hands to the face calls that were forced by the defensive line.

Defense had Mixed Results but Played Strongest When They Had Too

The Rams continued what has become a staple of theirs in allowing a decent amount of yardage but stiffening up in the red zone and on big drives.  Yes Jameis Winston threw for over 350 yards but in the red zone he was very average.  If the Rams can continue to play tough defense when they face game winning drives and red zone offense they could finish in the top of the rankings for points allowed.  One of the misleading facts of the Rams in the past is their points allowed mainly because it did not take into account points scored off of returns for touchdowns.  Which happened in this game as well. This Greg Williams defense seems to be for real and with multiple games this season against high scoring offenses, will be tested.  If the Rams can finish this season in the top five of defense then it will go down as an amazing feat as they face Brees, Brady, Newton, Ryan and other top quarterbacks.

This game for the Rams seemed to be lost once the score went over 20 points for the Buccaneers as most did not expect much out of the Rams offense.  Surprise!  The Rams were able to get the offense going and sustain drives that allowed the defense to stay fresh once again leading to a victory. Next week the Rams will face division foe, Arizona in what will be a tough, hard hitting battle as all NFC West games are.  If the Rams can continue their winning ways they could create some space between them and the rest of the West.