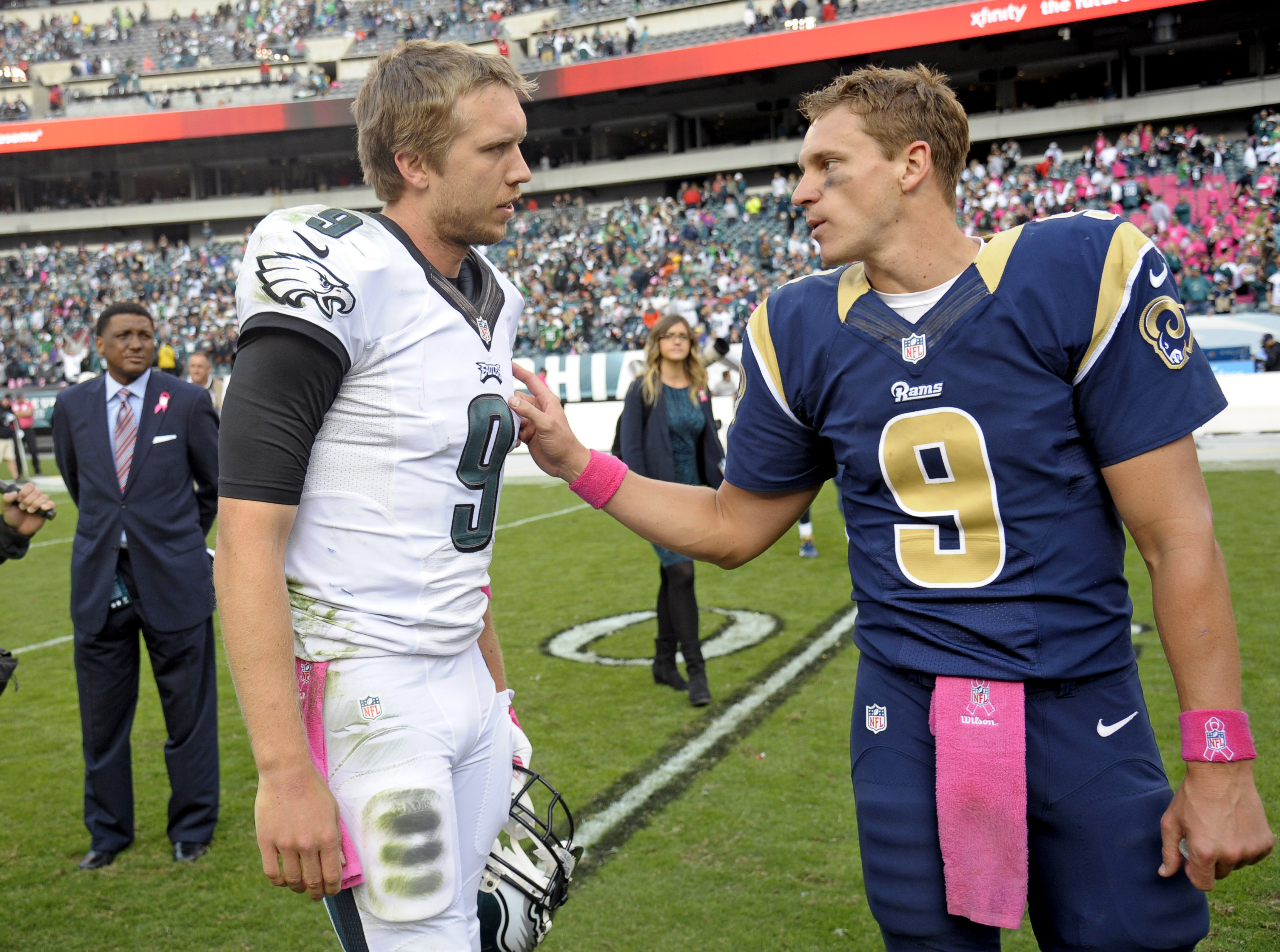 Austin Davis: No, Nick we don’t need you please don’t come to St.Louis or you will regret it…

What if I told you that Nick Foles, Case Keenum and Jared Goff never started a game for the Rams? Well you would think I was crazy and you would be right… Here’s the ultimate N – IF – L scenario in which a young quarterback by the name of Austin Davis gets his happily ever after.

It’s the year 2014 and the St. Louis Rams have lost their franchise QB Sam Bradford for the season to an ACL tear (thanks a lot Jake Long…). The Rams are 3-6 going into week 11, signal-caller Austin Davis has shown some potential for a franchise that has been looking for any QB help they can find. The rumors are getting around that Jeff Fisher is about to announce Shaun Hill the starting QB for the next game in Denver due to Davis’ recent struggles. Fisher instead comes out and shocks everyone and says “Austin Davis is our Quarterback, we will rally around him and play good football!”. He storms out of the press conference and onto the Denver game we go.

The Rams come back home as they end a three-game road trip, Davis takes the helm against a 7-2 Denver Broncos team that are favorites to blow out the Rams. That is not the case, the Rams defense proves to be too much for Peyton Manning and Davis leads the Rams to win over the Broncos.  The Rams sitting at 4-6 are trying to hold onto any playoff hope they can. Davis continues on as the running game and defense finally gets going in the midst of a serious playoff push for the Rams. The Rams are back in the national spotlight now soaring with a four-game win streak and now all way to 7-6 on the season. An impressive win on Thursday Night Football and a win over the Odell Beckham Jr. led Giants brings the Rams to their last game of the season at 9-6. With the Cardinals losing to the Rams the tie-breaker goes to the Rams if they defeat the dreaded Seattle Seahawks in the last game of the year.

Davis has the Rams rolling to this point and in Seattle it is no different. The Rams are up on the Seahawks on the road 17-3 to end the half but here comes Russell Wilson and he leads the Seahawks to 17 un-answered points and a 20-17 game. Still 20-17, Davis leads the Rams down the field from their own one-yard line down to midfield. Davis throws up a jump ball to Kenny Britt who comes down with it but it’s ruled pass-interference on Britt. Now 3rd-and-25 with the game on the line Davis dumps off a screen to Benny Cunningham who converts it. Davis takes a cheap shot from Michael Bennett (shocking…) and is unable to get up in time to spike the ball and the Seahawks win a thriller snapping the Rams six-game winning streak and eliminating them from the playoffs.

The 2014 season comes to an end with the Patriots defeating the Seahawks in the Super Bowl, which would end up being Seattle’s last shot at glory. The Rams shortly after announce that Sam Bradford will not return to the team and he has officially been traded to the Philadelphia Eagles for a 2015 third-round pick and a 2016 first-round pick. The media started reporting the Eagles offered Nick Foles in the deal but the Rams refused. The Rams would then go on to extend Austin Davis to a three-year deal and on to the draft we go.

The St.Louis Rams are on the clock in the first-round of the 2015 NFL draft and chose RB Todd Gurley with the 14th pick. In the second-round the Rams select Rob Havenstein 57th overall after trading down to acquire another third and sixth-round pick. With their three third-round picks the Rams select T T.J. Clemmings, G Jamon Brown and LB Paul Dawson. The Rams look to be really knocking it out of the park to this point but they would do their damage later in the draft, nabbing WR Stefon Diggs in the fifth-round, OT La’El Collins in the sixth (due to his draft mishap) and were able to land QB Sean Mannion, LB Bryce Hager and CB Ifo Ekpre-Olomu.

2015 starts off unbelievable for the Rams they end up moving Greg Robinson inside at guard making La’El Collins the Left tackle. A good offensive line is put in front of Austin Davis allowing him to make plays to his young WRs Tavon Austin and Stefon Diggs. Rams start off 3-0 heading into Arizona where Todd Gurley is unleashed running all over the Cardinals defense and leading the Rams to a 4-0 start. With the high octane offense the Rams start to form and one of the most dominant defenses in football the Rams go into a big game at home week 15 in what would be the final game played in St.Louis. Davis throws for four touchdown passes in a blowout victory over the Tampa Bay Buccaneers and leading the Rams to a 12-4 season.

The 2015-16 post-season would open up with the Rams playing a home game in St.Louis even if with the rumored move (awkward). Rams would go on to win a close game over the Arizona Cardinals and open up an NFC Championship game versus the Carolina Panthers. Cam Newton and company would ultimately end up being too much for Austin Davis and company. The Rams season would end one stop short of the Super Bowl. Austin Davis would end up finishing runner-up to Cam Newton for MVP, Todd Gurley would win Rookie of the Year and Aaron Donald would end up winning Defensive Player of the year.

Now onto the 2016 season we go with the Denver Broncos dominating the Panthers in their Super Bowl victory. The NFL would officially announce the return of the Rams to the L.A. market. The Rams would decide to let go of MLB James Laurinaitis, TE Jared Cook and DE Chris Long as cap casualties. Chris Long would end up returning with a huge pay cut and his reasoning? “I want to win and this team gives me the best chance”. In what the media found would be a difficult signing period, the Rams would prove them wrong re-signing CB Janoris Jenkins, CB Trumaine Johnson, OLB Mark Barron and DE William Hayes.

The rich of course would get richer as the Rams still had their pick and the Eagles pick waiting for them in the 2016 NFL draft via the Sam Bradford trade. The Rams would plug up their sure-fire offensive line by adding Ryan Kelly at 13th overall to start at center and then drafting another man for the defense Jaylon Smith who was hampered by a gruesome knee injury. The Rams would draft CB Cyrus Jones in the second-round, DT Javon Hargrave in the third, TE Tyler Higbee in the fourth and would fill out the rest of their draft with WR Pharoh Cooper, TE Rico Gathers and QB Dalyn Williams.

2016 would start off great for the Rams as fans looked at other teams around the league the Eagles stuck with Sam Bradford due to the amount of capital they gave up to get him, rookie QB’s Jared Goff and Carson Wentz would end up having great seasons for their respective teams. Wentz ended up being drafted number one overall by the Miami Dolphins after Adam Gase went against his word of sticking by Ryan Tannehill and decided to deal the farm to get his QB. Meanwhile the Browns had the number two overall pick and traded it away to the San Francisco 49ers who in turn drafted California QB Jared Goff.

The L.A. Rams would end up going 14-2 with Austin Davis winning the MVP, Todd Gurley breaking the single-season yards record held by Eric Dickerson and the Rams defense breaking the single-season sack record with the menacing defensive line rotation that housed Aaron Donald, Mike Brockers, Will Hayes, Robert Quinn, Dominique Easley, Chris Long, Javon Hargrave, Ethan Westbrooks and Matt Longacre. Before we knew it literally on a dime the Rams had absorbed the Broncos once unstoppable defense and added an offense to it. The Rams would play division foe San Francisco 49ers to go to the Super Bowl. Jared Goff started off well but it came down to his fumble at the goal line that sealed the deal for L.A. Meanwhile the Broncos played the Miami Dolphins in the AFC title game after a monumental season from Carson Wentz to lead the Dolphins to an AFC East title over the unstoppable New England Patriots. Wentz led the Dolphins to three straight scoring drives against the talented Denver defense. It came down to the final play in which Wentz faked out Aqib Talib who bit on the pump fake and threw a bomb to WR Kenny Stills who got behind the Denver secondary. A perfect ball would bounce off the hands of Stills ending Miami’s historic season.

The date was set and Super Bowl between Austin Davis and Case Keenum (who both faced eachother in college) was about to get under way. Gary Kubiak had taken all the smack for acquiring Keenum and starting him over rookie QB Paxton Lynch but here he stood in the playoffs. The two best defenses arguably in NFL history squared off. Davis started out of the gate lackluster unable to connect with Tavon Austin twice on deep bombs and Todd Gurley on a screen. The Rams defense wouldn’t budge for Case Keenum either. Keenum tried running the ball but the Rams furious front seven was ready for it. The two teams would go into the half tied at zero. In what most fans might call a “snoozer” the defensive battle was a thriller. Out came the teams in the second half (after the dreadful halftime performance from Lady Gaga.) Austin Davis had the Rams moving the ball, WR Stefon Diggs beat CB Bradley Roby on a double-move and the Rams were in the red zone. Von Miller then beat Rob Havenstein around the edge and forced a fumble on Davis. It was Keenum’s turn late into the third-quarter. Keenum mirrored Davis who led his offense down the field with support from a 55-yard strike to WR Demaryius Thomas. Keenum on the next play in the red zone would try to force it into the end zone to WR Bennie Fowler and instead CB Janoris Jenkins would jump the route and take it to the house 104 yards for the pick six. The Rams 7-0 lead would last until mid-way through the fourth quarter when Austin Davis would connect with TE Tyler Higbee on what could have been a 65-yard touchdown but instead CB Chris Harris Jr. would punch the ball out and take the ball back for a touchdown. The score remained at 7-7 the Rams would drive down the field 80-yards to score on an end zone fade in the corner to TE Rico Gathers. Austin Davis had won the Super Bowl and the Rams had won a Super Bowl in their first year back and their 50th inaugural season in L.A. Jeff Fisher would retire right after the game showing a montage of 7-9 bull-s*** and a compilation of tweets and facebook comments of how many people wanted him fired.