How do the 2016 Rams offensive starters stack up against the league's best? 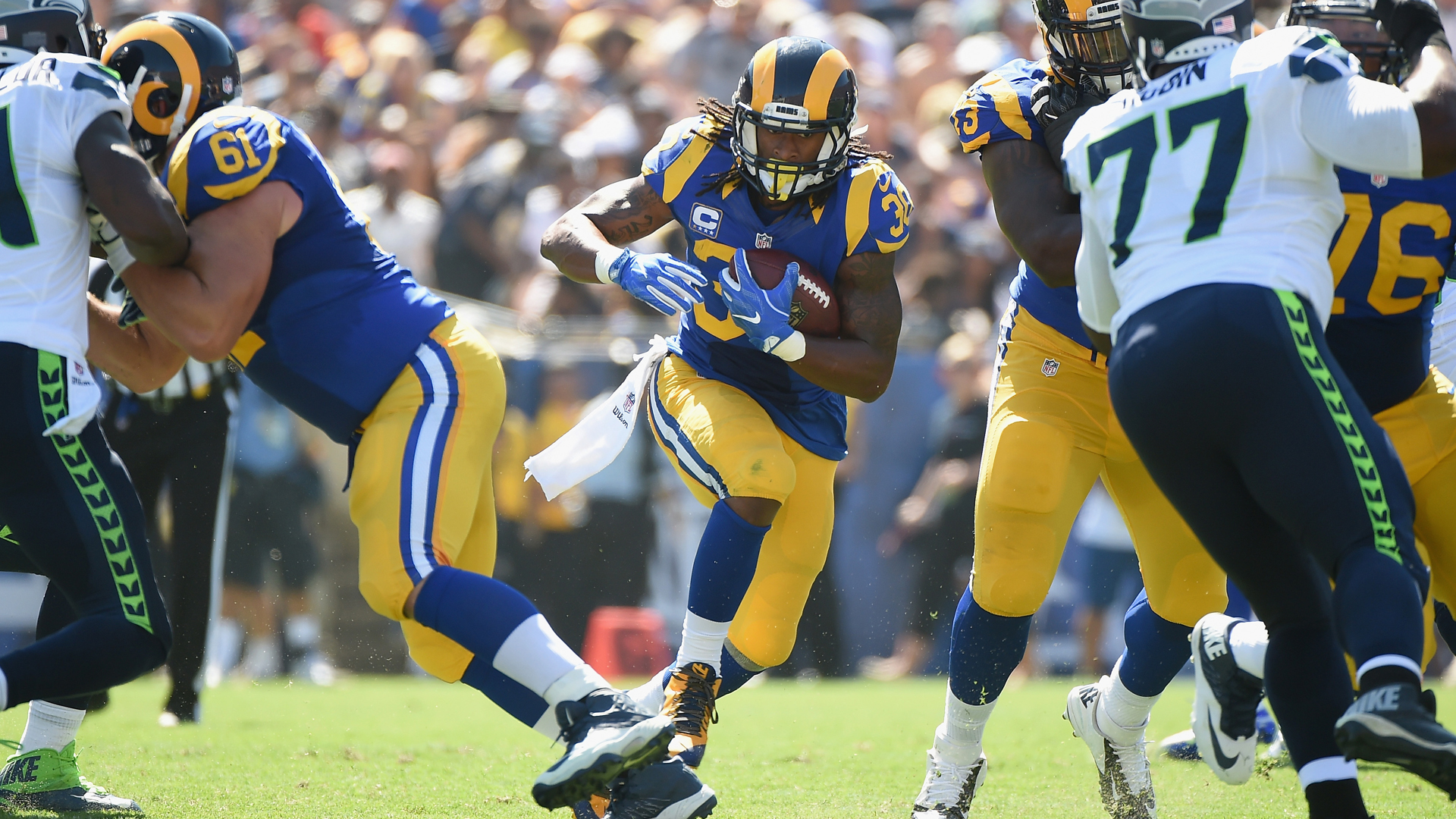 Many around the league don’t know where the Rams fall on the totem pole. Are they great, good, average, bad or terrible. Well I think they are better than most analysts think, and that was proven when just about every analyst had them getting blown out by Seattle. That of course, was not to be as the Rams went on to defend their turf in an old school 9-3 defensive battle. Here is how the 2016 L.A. Rams starters stack up against the league’s best of the best. Subscription is required for Pro Football Focus grades

Well, we will make this as quick as possible, Aaron Rodgers is the absolute best QB in the league. Don’t let the slow start fool you. Rodgers has only had two seasons where he has thrown double-digit interceptions. In every season he has started more than 10 games he has had over 25 touchdowns. Case Keenum has 11 career interceptions which Rodgers has only thrown more than in a season once in his career. Keenum has also never thrown double-digit touchdown passes.

If Rodgers is considered the best which by all measure he is, Keenum is considered the bottom tier of starter in the NFL. The ironic thing is where PFF grades Keenum and Rodgers. We won’t go into Wentz since that’s a tough pill to swallow.

It gets kind of foggy because right now the best Running back in the league just tore his meniscus and it looks like his future his in doubt. Todd Gurley continues to fight with no push from the offensive line. Gurley, is only going to go up from here so there is no reason to be worried and the Rams likely have a top five back in the league that bodes well for them when comparing to the rest of the league.

David Johnson who was a third-round pick in the same draft as Gurley is the number one back this season per PFF.

The Rams seriously have a weakness at the WR spot and there’s no wonder why fans want to see fourth-round pick Pharoh Cooper and UDFA Nelson Spruce come back from injury. With that being said Kenny Britt is having a good year thus far and he should continue on the pace he is on with the chemistry he has built with Keenum. Surprisingly Rams slot receiver Brian Quick is rated higher than Tavon Austin. Austin is considered the lowest rated WR in the league that is eligible to be graded. Austin is off to a slow start but he should bounce back from it. Antonio Brown who is considered the best WR in football is barely ahead of the Rams no.1 WR so that should tell you something.

Pro Football Focus rated Stefon Diggs the highest WR and rightfully so, he has been superb and leads the league in receiving at the moment.

The Rams Tight ends aren’t elite by any means but Lance Kendricks is only going to continue to improve and same for Tyler Higbee. Kendricks hasn’t started in three years so he’s just getting back into the flow of things. Early on Kendricks is already a favorite target of Keenum so look for his production to rise. It’s also worth noting Kendricks is two spots ahead of former starting TE Jared Cook. Obviously the Rams are far away from having the type of talent at the TE position the Patriots have with Rob Gronkowski.

Greg Olsen of the Carolina Panthers comes in at first place with the PFF grades and he has been a top 5 TE every year the past five years.

The number-two overall selection in 2014 has struggled mightily and while there looks to be hope judging by the way he played in preseason, there’s still a reason to be worried about G-Rob. Robinson has had the tough task of going up against two stout defensive lines in San Francisco and Seattle back-to-back. There is to be no excuse though because the Rams drafted Robinson much too high to struggle this bad. Robinson is running out of time before he becomes a permanent bust. He is also no where near the top or even the middle of the pack. The Rams have a serious weakness at left tackle for the time being.

Meanwhile the Rams division rival have the highest ranked LT in the NFL — Joe Staley. Don’t know him? He was in charge of single-handedly shutting down Robert Quinn.

The lone bright spot on an abysmal offensive line has to be Rodger Saffold. The problem with him has never been his play, it’s his health. He is a good offensive guard not quite on the level of Kelechi Osemele on the Raiders or Justin Pugh of the Giants but he is a tier below them.

To put it straight forward I don’t understand how Tim Barnes is still the starter for the Rams. He is always ranked in any sort of system at the bottom of the barrel. Once again he finds himself around the bottom. The Cowboys have the best center in the league in Travis Frederick. Denver’s Matt Paradis is having a very good start to his season. The Rams still have Barnes who is a serviceable back-up on any other team.

At first glance Cody Wichmann looks awful but keep in mind the first game he rotated with Jamon Brown and Andrew Donnal and in his second game he finally got the start and found out quickly that Barnes is the weak link of the entire offensive line. With more playing time Wichmann should only improve and hopefully the same goes for the rest of the offensive line. Marshal Yanda is the best right guard and was rated such by PFF. He is the best every year and somehow no one notices him. The Rams are far behind in that category but hopefully Wichmann develops into a better player.

Rob Havenstein was the best rookie offensive lineman last year. This year he looks off to a rough start and in part due to the lack of preparation he had coming off an injury to his foot. He is rusty right now but once he gets back to form expect Havenstein to finished as a top 10 right tackle. As far as stacking up to Lane Johnson goes Havenstein isn’t as much of a do-it-all guy like Johnson but Havenstein is a mauler in the run game and while pass blocking isn’t his forte he didn’t give up a sack last season. The Rams have a good player manning the right tackle spot

Rams Injury Report 9/21: Everyone practices in some fashion