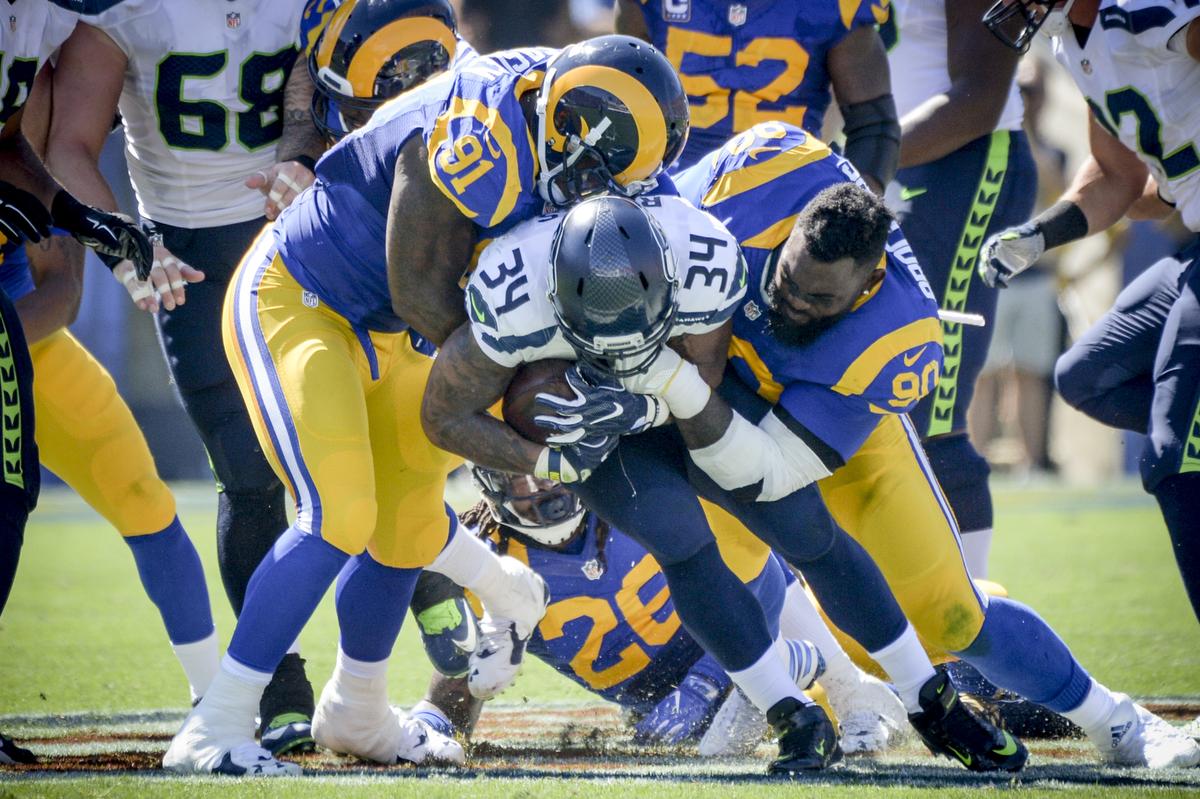 When the Rams moved to Los Angeles they left behind some old players and some talented players at that. They also brought in some new players but they didn’t receive the haul many expected with the attraction of moving to L.A. Here is a comparison of the Rams key additions versus the key losses suffered this off-season.

DT Dominique Easley: The former Patriot is making the veteran minimum and has been by far the best signing of the free agency period for the Rams. Easley has taken over for the rotational spot that was manned by Nick Fairley last season. Easley already looks like a steal for the Rams, he played 21 snaps this game versus his 33 in the previous game. While that looks bad its important to keep in mind that Aaron Donald was tossed from the opening game on Monday Night Football so Easley received extra playing time. Easley in his limited playing time this past week versus Seattle racked up a PFF rating of 84.7 which is very efficient and considered starter quality play.

Per PFF Easley was the Patriots best interior defensive lineman last year but they strangely let him go for nothing, not even in a trade and the Rams took someone’s trash and hopefully find it to be their treasure.

CB Coty Sensabaugh: Former Titan and Gregg Williams coached defensive back, Coty Sensabaugh joined the Rams this off-season in what many referred to as a head scratcher of a contract. Sensabaugh has always been considered mediocre at best but the Rams gave him some serious money (3-year worth up to 19-million dollar contract). The real shocker is that one of the best nickel Cornerbacks in football ex-Packer Casey Hayward signed for almost the same contract and after Sensabaugh had signed.

The Rams signed Sensabaugh to compete with CB E.J. Gaines to fill the void left by the departure of former second-round pick in 2012 Janoris Jenkins. Sensabaugh has since taken over for the injured Gaines right out of the gate and has been roasted by the likes of Jeremy Kerley. Sensabaugh presumably lost his starting job in favor of young former Oregon CB Troy Hill. It’s going to be rough trying to get Sensabaugh off the books next season.

DT Cam Thomas: The former Steeler 3-4 nose tackle found home this off-season with the L.A. Rams. He was a member of the UNC defensive line that included current Ram Robert Quinn and now recently cut Ram Quinton Coples. Thomas made the 53-man roster and has played in every game so far. The team seems to love his size up front since they don’t have a true nose tackle on the roster after him. The Rams played some 3-man front defensive sets in the Seattle game so I imagine that is why Thomas is still on the Rams.

He really hasn’t been all that impressive and seems too slow at times but it is worth mentioning he has played 56 snaps total in two games.

TE Jared Cook: Cook had some production with the Rams. He finished with a total of 1,786 yards and eight touchdowns. He is…like it or not one of the best and most talented Tight ends in the franchise’s history. That however, is because of the lack of talent over the years. The Rams went back to the original starter at TE Lance Kendricks who is already off to a good looking start in L.A. Cook, who looked stellar in preseason has yet to crack the top of the depth chart as he still sits behind Richard Rodgers. With five catches for 38 yards on the season that number is sure to go up when the Packers realize Cook is much better than Rodgers at TE.

Who would I rather have starting at TE? I would take Kendricks in a heartbeat, the Rams made a good move in letting go of Cook.

DT Nick Fairley: Sure haven’t heard much thus far out of Fairley. He is sure to get more noticed as the season goes on but to this point he has looked okay. The Rams look like they made the right move in letting him walk and signing Easley.

CB Janoris Jenkins: Perhaps the biggest mistake was letting go of Jenkins. I am a fan of standing your ground and not overpaying talent but, what it comes down to is this. The Rams wanted to give Jenkins nine-million dollars a year. Jenkins wanted close to 13-million which is around how much Trumaine Johnson is making this year due to the franchise tag. My issue with the Rams not bringing back Jenkins is because they didn’t really have a concrete plan. With Gaines struggling to stay healthy and the Rams wasting five-million plus on Sensabaugh it might have been worth overpaying Jenkins.

Jenkins has been playing very good football for the G-men to start off the new campaign. He has been thrown at 16 times and has only allowed 66 yards he has also yet to be beaten for a 15 plus yard play according to PFF. Week two PFF graded him an 87.7 which is above great and almost in the elite category and he was named by the NFL Special teams player of the week. Jenkins is already looking like he’s out to prove the Rams they made a mistake.

MLB James Laurinaitis: One of the toughest Rams in franchise history and the all-time Rams leading tackler was a cap casualty and while the Rams had a plan in mind to bring back Laurinaitis. It wasn’t as a starter. Laurinaitis felt disrespected and that’s why he left. Shortly after he took a shot at the Rams culture saying that 7-9 became the norm. Rams fans will always love Laurinaitis for what he did and how he left it all on the field every game but it was time. Alec Ogletree has now moved over from outside to the Mike of the defense and is already showing incredible improvement. If Ogletree can master the position, with the ability he has he can be one of the best. Laurinaitis has recorded 10 tackles thus far.

DE Chris Long: He wasn’t exactly a need since the Rams defensive line is consistently stacked with depth but Chris Long is balling out in every meaning of the word for the New England Patriots. Long is not shy to playing the Cardinals since he did it often with the Rams but, he finished as the second highest Patriot defensive player grade at 82.2 and finished with a grade of 81.0 this past week. He continues to pressure the QB and if the Rams suffer an injury to Will Hayes or Robert Quinn. Rams fans are going to quickly miss Long. Right now Long has accumulated a sack, fumble recovery, pass breakup and five tackles.

FS Rodney McLeod: Rodney McLeod was a diamond in the rough the Rams found via undrafted free agency. Not too many Rams fans thought the Rams would miss out on bringing him back but it turns out they did. McLeod was getting much better and with the Rams weakest spot on the defense arguably being the Free safety position it was kind of stupid to let McLeod walk. Now McLeod finds himself in Philadelphia where he started his season in week one with a PFF grade of 78.5. He has tallied nine tackles and an interception already, something the Rams still don’t have.