10 Takeaways from the L.A. Rams 9-3 Win over the Seahawks 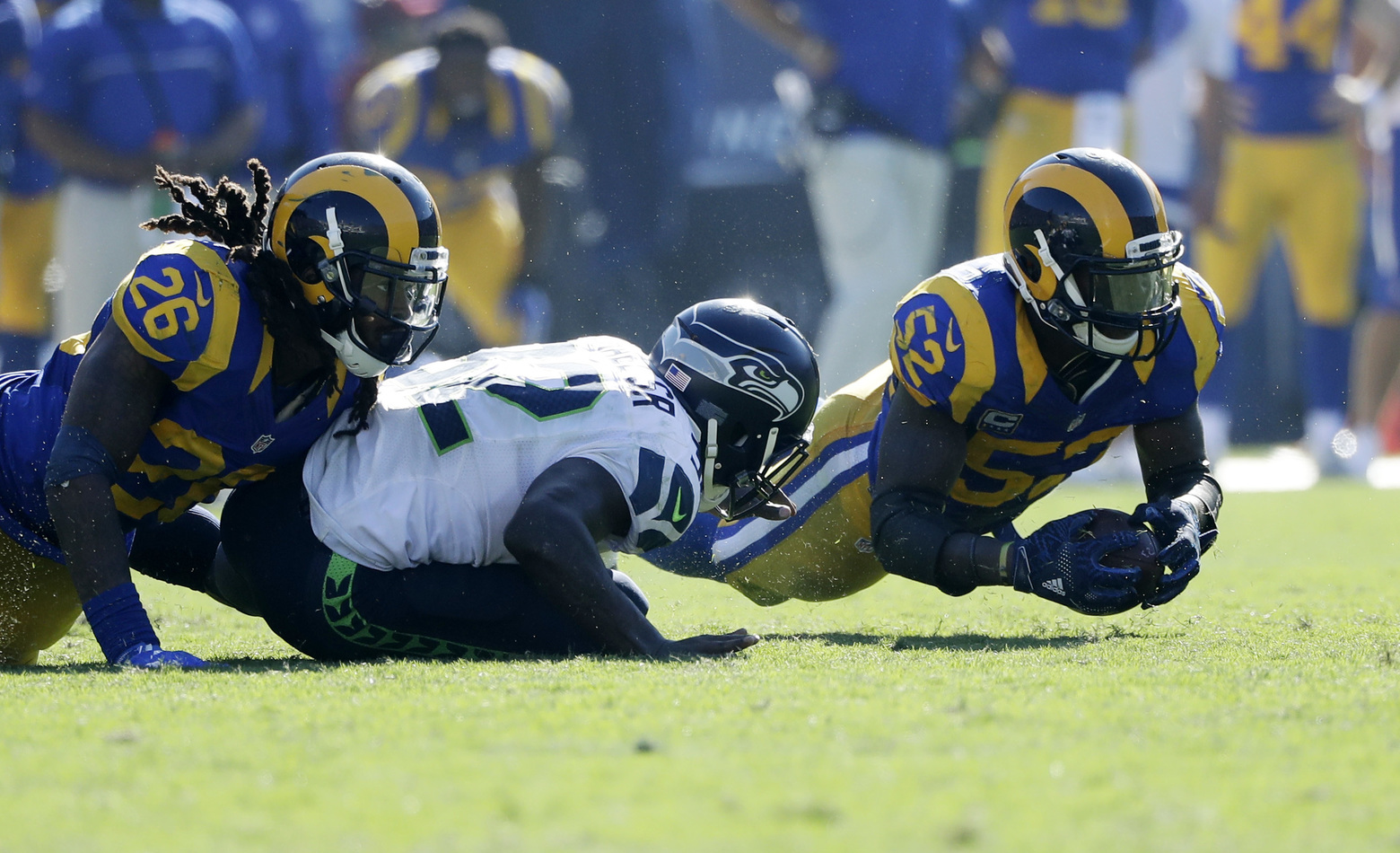 This week the Rams took on the Seahawks at home and, as predicted, the game was once again a defensive showdown.  No touchdowns were scored but the Rams were able to come out ahead taking their record to 1-1 entering week three.

1. Rams look juiced up for most of game and 1st half

This game started quickly and for the Rams they looked determined from the start to redeem themselves for last week.  The team looked especially jacked up for the first half and continued their dominate play into the second half.  If the Rams can continue this sense of urgency every week and not look beyond their current opponent this could be the year of the Ram and their playoff hopes.

Coty Sensabaugh started the game and again allowed a massive gain to the Seahawks.  After over a quarter and a half the Rams made the switch to Troy Hill who played sound football for most of the game. Sensabaugh seems to have lost his spot on the starting unit while EJ Gaines is out and after Hill’s strong play, may have lost it for the foreseeable future.  In the next couple weeks I wouldn’t be surprised to see Sensabaugh released from the team. Hello Dee Milliner?

For the first time in over 20 years the Rams played a home game in Los Angeles at the Coliseum.  The atmosphere for the game was electric and provided a true home field advantage.  The Seahawks were caught with multiple false starts and a delay of game which helped the Rams defense hold the Hawks to just three points.  The Rams will hope they can continue to have this type of turnout and advantage at home which could lead to a playoff birth for the first time since 2004.

For the pundits and experts, this week reminded them that the Rams still boast one of the best defensive lines in all of football.  The Rams continually hassled Russell Wilson and the run game for the Seahawks.  The Seahawks got nothing in the run game allowing the Rams to take turns attacking Wilson.  Donald, Quinn, Brockers, and Hayes all made plays today.  More on the defense later.

After the first two weeks it looks as though Kenny Britt could have a career year for the Rams.  Something the Rams have lacked since Torry Holt has left the Rams, Britt could surpass 1,000 yards.  That is not a typo, that is the fact we face since it is apparent that Britt has become a favorite of incumbent starter Case Keenum.

The offense of the Rams struggled once again but made strides today moving the ball.  Once again the Rams focused on throwing off of play action and Gurley had a serviceable day running the ball.  The penalties on offense really killed drives including holding calls on Greg Robinson multiple times.  The offense will look to get going against Buccaneers, possibly the lesser of the three teams the Rams have faced this season on defense.  If the Rams cannot get the offense going they will once again lean on their defense this season, possibly too much.

Cody Wichmann started for the Rams today at right guard and provided good play.  A surprise to many for Wichmann starting over Jamon Brown except for a few here at Downtown Rams.  Wichmann supplied decent run blocking and decent pass blocking that accounted for one sack against Keenum.  The sack could be attributed to Barnes or Wichmann, either way it was a disappointing play neither Wichmann and Barnes both allowed a rusher to bypass both of them.  All in all, it was a good day for the Rams up front.

The Rams and Seahawks supplied a defensive showcase which not much offense was displayed.  Once again the Rams held the Seahawks to less than a touchdown and, although not scoring one of their own, the Rams were able to put three field goals on the board.  With Wilson hobbled by an ankle it was apparent he could not move like we are all used to seeing and it hurt the offense of the Hawks.  Not one unit on either offense made a impact except Kenny Britt and it was Britt who put this game away late.  The Rams played a stupendous game on the defensive side of the ball and after today it leaves one to wonder if they really lost much this offseason.

Greg Zuerlein carreid the Rams offense this week and luckily our defense was able to hold the Seahawks to one field goal.  Zuerlein seems to have shaken his bad play from last season and been relatively perfect for this season.  Maybe the offseason competition pushed him or maybe last year was an outlier. Either way, Zuerlein will once again look to become a weapon for the Rams with his massive leg.

Russell Wilson was obviously hampered this game and was no threat running the ball.  Wilson had a couple good runs to extend plays but nothing like we have seen over the course of his career.  The Rams took advantage as they bombarded Wilson with pass rush and stuffed the run forcing him to throw.  I stated before the game that it was surprising that the Hawks played Wilson to begin with, seeing as their playoff hopes ride and die with him. Lucky for them was the fact that Wilson ended the game no worse than he began it.

All in all it was an impressive showing for both defenses but lackluster for both offenses, which is not at all surprising.  The Rams looked focused and ready to play from start to finish and once again beat the Seahawks.  As it stands all teams in the NFC West are 1-1 heading to week three.  If the Rams can continue their focused play they could shock the Cardinals week four, taking the West lead.  All will be depend on the legs of Todd Gurley and the defense to continue what they started against the Seahawks.