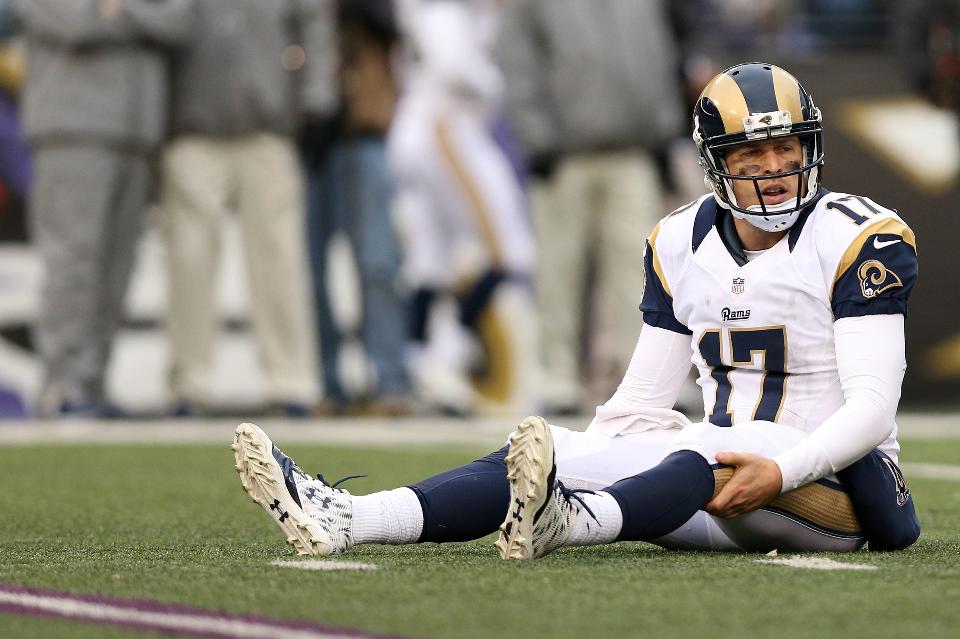 Alright Rams fans that was quite the debacle! Similar to what we saw opening day in 2014 versus the Vikings. Here are my takeaways from this painful loss.

1. Jared Goff and…Sean Mannion might get to play more than many anticipated this season

If you don’t know why Keenum was starting over Goff then you didn’t watch the preseason or Hard Knocks. Keenum starting over Mannion however I don’t know. Keenum looked dreadful in this one and while it wasn’t all his fault because everyone outside of Greg Robinson looked horrible on the offensive line. Keenum simply didn’t lead his team and really was hard to watch.

This isn’t a bash job of Keenum, its more that Keenum didn’t do anything to show he’s the absolute obvious option over rookie QB Goff or last year’s third-round pick Mannion. It makes absolutely no sense to make Mannion inactive next year in favor for Goff when the only one who got to play was Keenum and he threw two interceptions.

Keenum came into a winnable game and really couldn’t do anything. Zero points on the board is inexcusable no matter who is at fault.

Wasn’t a fan of either of these players when they signed them and this game didn’t change my opinion. Sensabaugh was absolutely dominated by a receiver that has done nothing in his career — Quinton Patton. Sensabaugh has a habit of not only blown coverages, falling down and not knowing what his assignment is but he also is a flag waiting to happen. Sensabaugh simply isn’t the corner back that deserved the same contract as one of the better nickel corners in the league Casey Hayward.

This isn’t all about Sensabaugh, Thomas was active over surprising healthy scratch Matt Longacre. That proved to be a mistake early on as Thomas was pushed around or better yet stood out of his gap assignment letting Carlos Hyde through time-after-time. It plagued him again when the Rams seemed to have Hyde’s number until Thomas came in during a goal line stand he was pushed around and didn’t fill the gabthat Hyde scampered through. It’s not even the fact Thomas is so slow and doesn’t do his job. It’s more of the fact now the Rams signed Thomas to fill running lanes and left guys like Morgan Fox off their 53-man roster. Thomas was a horrible signing and the hope is that the Rams learn that sooner than later.

3. Greg Robinson has improved, rest of the Offensive line was a trainwreck

Once the number two overall pick in 2014, Robinson was going into this year with possible bust written all over him. Robinson however, looked good in this game he seemed to be the only offensive lineman that was consistently holding his ground. This was a disappointing showing out of an offensive line that allowed the fewest sacks last season. The lone bright spot was Robinson and we can only hope that he propels his play to another level and becomes the franchise left tackle the Rams intended him to be.

4. Rob Boras’ play-calling is just as flat as last year

The Rams looked like they had some connection with the offense on the opening drive. The problem is Rob Boras is way too conservative and he is holding back this offense. The game-planning was off and the amount of times the Rams had Keenum throw check downs and two yard passes was just painful. This looks identical to the offense we saw during Gurley’s slump last year. Not a good look for a team that needs to keep the defense off the field.

5. Kenny Britt is the best WR on this team and it’s not up for debate

This guy always seems to be make the catch, get open and fight for extra yards. Britt wasn’t targeted enough. There is no such thing as throwing to a receiver too often. Britt is the best WR on the Rams by a country mile and you should be targeting your best receiver 10 plus times a game. The offense should open more when Pharoh Cooper and Nelson Spruce come back from injury but this isn’t a good look that only one receiver really stepped up.

6. The referees were terrible but, that’s to be expected

The amount of times the Rams defensive line was held in the first half was crazy. The 49ers didn’t receive a penalty until the second half. The refs are always bad it seems but there were times when they missed easy calls in their face that made it look biased on their part. Still, when you lose a game 28-0 the refs didn’t cause you to lose by that margin but nonetheless it’s still a takeaway.

7. Mo Alexander should not be starting over Cody Davis

I can’t stress this enough. I mentioned this on the podcast with Blaine last week. Davis is a cover guy who can tackle and is very fast to the ball. Alexander is a hard hitting Safety that struggles in coverage. That’s not a slight on Alexander, it’s more so that he is slated as a Strong Safety. Davis absolutely should be the starter at Free Safety no questions about it. This game you saw when Sensabaugh was beat consistently Alexander wouldn’t be there to help him over the top. Davis is much better suited and absolutely outplayed Alexander in preseason as well as showing a little chemistry with franchised corner back Trumaine Johnson.

8. Todd Gurley is starting to look like a doomed Steven Jackson with eight-in-the-box

9. Injured players were missed in this game

Regardless if Nelson Spruce or Pharoh Cooper are fan favorites or not they are going to be vital for this passing game. Brian Quick can’t be your third receiver. Spruce’s trademark is that he catches everything and Cooper’s trademark is his yards after the catch and ability as an acrobat. Whether the problems ultimately lie with the Rams QB Keenum or the receivers. Regardless, the Rams will enjoy having Cooper and Spruce back. The Rams came into this season scheming to use Cooper and Austin to complement each other while having their big physical receiver Britt on the field. Hopefully Spruce and Cooper come back next week because after this showing they might need them more than we thought versus Seattle.

10. Last year the 49ers dominated a team that won their division, don’t write off the Rams yet!

The Rams looked bleak in this game, it looked like the offense relapsed and the defense was the same as last year playing exhausted from the time stuck on the field. The 28-0 loss is going to sting and might lower many people’s expectations but, it’s important to realize the 49ers beat down the Minnesota Vikings last year on Monday Night Football 20-3. The Vikings responded winning 11 games that season which is exactly what I predicted this Rams team would do. It’s early and they got a big game in Seattle next week that they can bounce back with.

Have any takeaways of your own? Sound off below!

Fisher: Keenum is still our starter, if this continues we'll have to reconsider