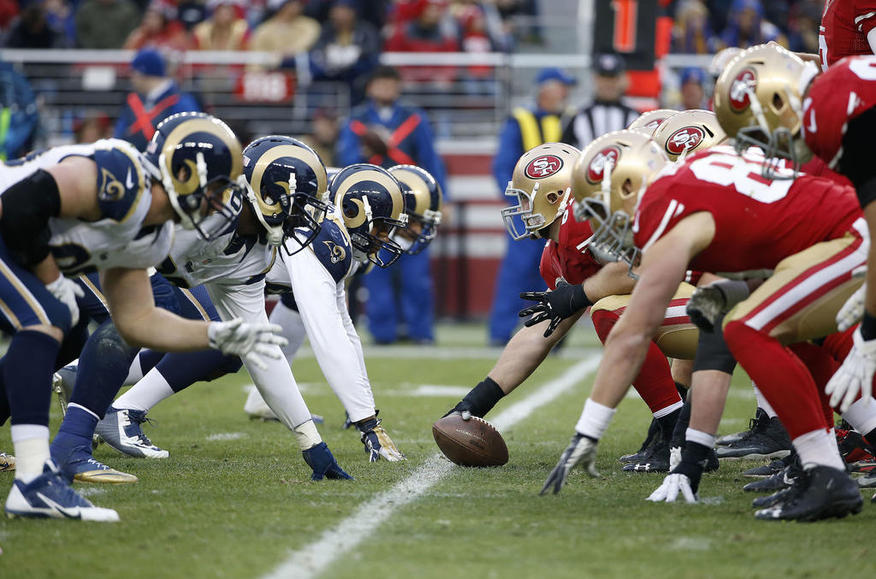 To end the opening week of NFL football the newly minted LA Rams will visit their once again cross-state rivals the San Francisco 49ers.  We will preview the game that will air on Monday Night Football and see what both sides will likely lean on to take home the victory in what will most likely be a smash mouth football game.

For the 49ers the game will start and end with running back Carlos Hyde. The Niners will look to get Hyde going early in the game and will try and create a tempo that Chip Kelly has become anonymous for.  With their up-tempo style they can create mistakes from teams that are not used to or in shape for that kind of speed.  Along with their tempo and running game, the Niners will also try and take shots with Blaine Gabbert and most importantly keep him clean from the Rams stout pass rush. For their defense, they will focus on stopping Todd Gurley and Tavon Austin on the jet sweep therefore forcing new starter Case Keenum to beat them through the air.  If the 49ers can slow the exotic run game of the Rams and establish their own tempo this could be a win for the team in the bay.

For the Rams the game plan will focus on pounding the 49ers with Todd Gurley and running the jet sweep with Tavon Austin.  The Rams will attempt to hold the ball for extended periods of time to get the 49ers out of rhythm on offense.  If the Rams can get the run game going with Gurley they will take shots off play action with Kenny Britt and Austin vertically down the field.  Once the Rams are on defense the number one priority will be to stop Carlos Hyde with the 49ers lacking receiving threats and a competent quarterback.  Once they force the 49ers into long third downs, the Rams can unleash their dominant pass rush of Robert Quinn and Aaron Donald on Blaine Gabbert.  If Gabbert is pressured, he can make mistakes and throw into traffic.  Another strong point for the Rams will be utilizing their strong punt team to win the field position battle and pin the Niner offense in their own territory.

Yes, these game plans look alike.  Yes, this game will be a smash mouth, defensive battle.  With both teams strengths being running the football, this game will ultimately come down to who can stop the run and create a few turnovers or chunk plays.  With the Rams seemingly having the better running game and defense this should be an opening week win for the visiting team but as we’ve seen with this division before nothing should be taken for granted.