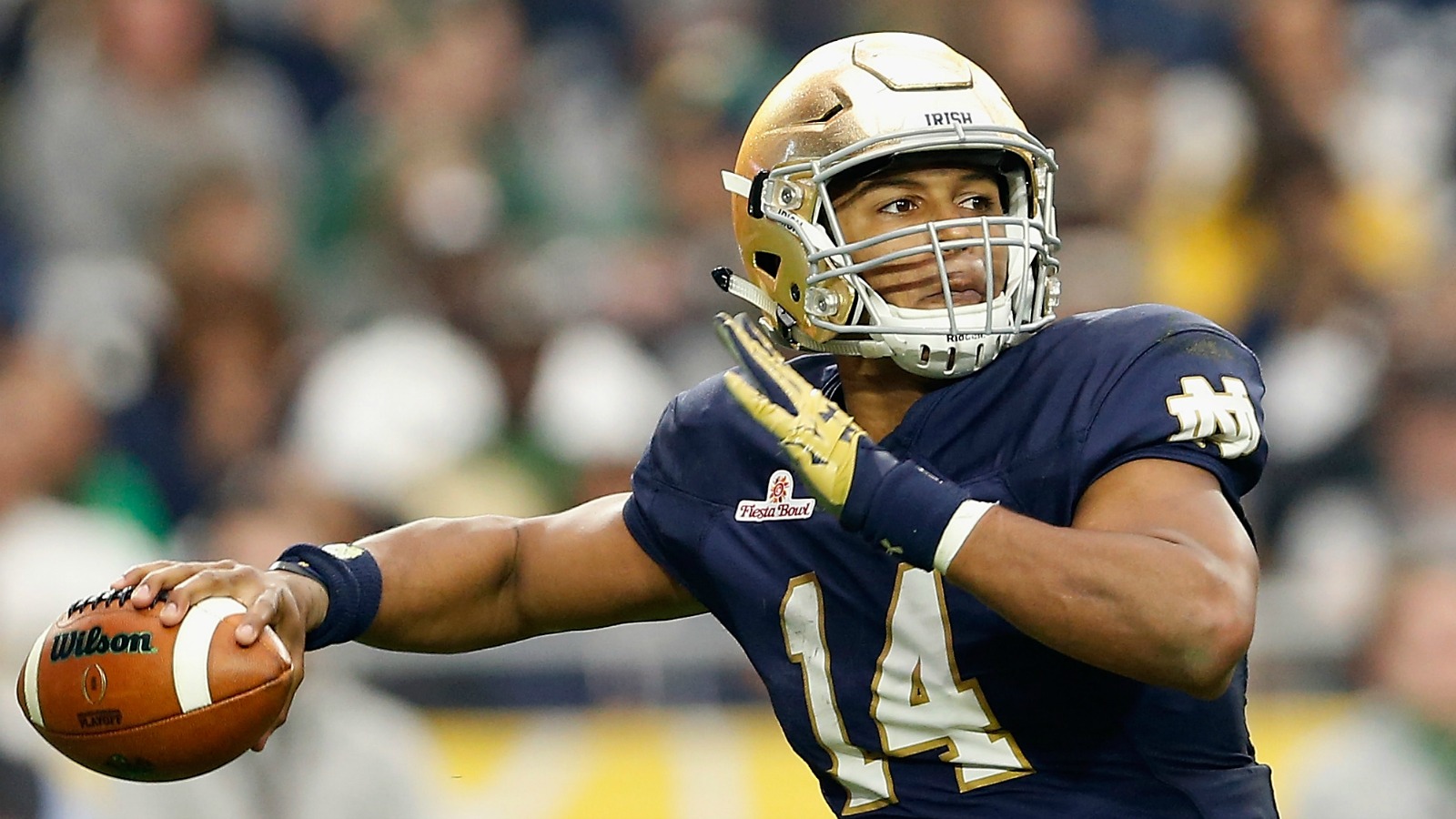 In this new series I am going to be covering the 2017 NFL Draft prospects week-by-week. Now lets dive right into who I saw week one of the college football season.

I am just going to say this right now, DeShone Kizer is my no. 1 quarterback prospect in this draft, not Deshaun Watson. Is that crazy to some? Yes, it absolutely is! If you watch the tape Kizer is just a much more quality decision maker (there are NFL quarterbacks that wish they had that trait). Kizer jumps right off the page with ideal size at 6-foot-4 and 230 pounds which trumps an “undersized” frame of Watson. While Watson will probably run much faster at the combine than Kizer he just doesn’t possess the arm strength or talent that Kizer does.

How much do I like Kizer? Well it is very early as a matter of fact the NFL season hasn’t even started yet but, he definitely would be my no.1 pick in this draft. Kizer will be able to kill you with his legs just as well as his arm but you don’t need to worry about him being hurt running the ball like Watson who weighs a measly 205 pounds. One thing that is important in the NFL are the bucket throws. They aren’t an easy task, it takes a quality thrown ball with touch and placement for the wide receiver so he doesn’t break his stride and it’s an easy catch to run immediately after. Kizer excels in that area. Kizer also shows tremendous poise as he stays calm, cool and collected in the pocket but he’s not unaware of what is going on he just doesn’t panic and continues to make teams pay for testing his field vision.

Unless Kizer falls off the face in the earth in between now and the NFL draft next season he is a lock to go in the first-round and the better question is if he goes no. 1 overall and right now I would say he’s the first guy off the board if the draft was today.

The 2017 WR Draft Class is loaded with size 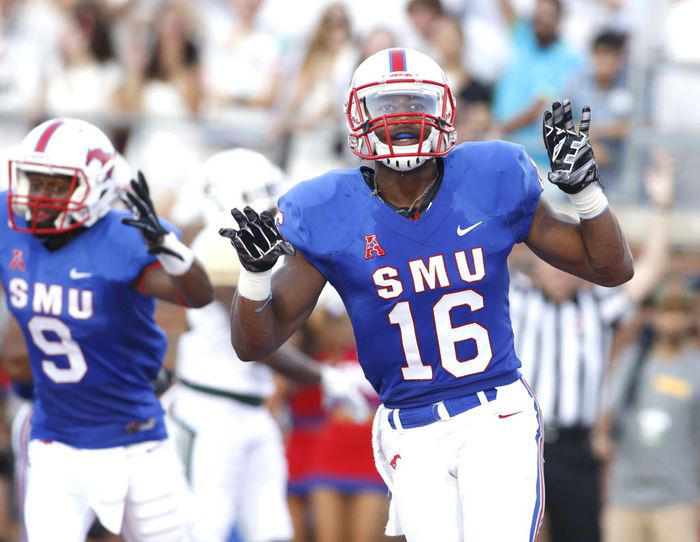 This class is full of WRs 6-foot-2 and above and it’s kind of scary to be quite honest. Overall this is how my top ten WRs shake out and notice the height next to each name

Some serious height there. It’s going to be a three horse race all season for the who becomes the first WR drafted first. Most scouts right now are all jumping on the Mike Williams bandwagon and forgetting how explosive Juju Smith was last season. What it comes down to is this, USC played an awful game against Alabama so its not fair to really pin Smith’s production on the ability to separate. There were a couple of huge times in that game vs. Alabama where Smith worked himself open and QB Max Browne just flat out missed on the throw or didn’t see him.

The sleeper to be the top WR in my opinion is Courtland Sutton. He is a spitting image of Clemson’s Mike Williams same height and weight. Executives are already comparing Sutton to the likes of 2016 first-round pick Josh Doctson. Sutton could be picked high in the first round depending on how the pre-draft process and his season works out for him. So far 4 catches, 162 yards and 3 touchdowns for Sutton to open up the season sure looks like the way to start climbing up in draft position.

The Rams with where they would be picking in the draft might want to target Malachi Dupre who looks to be a second-round pick at this point.

Sleeper Safeties the Rams could end up with…

The Rams as you know could use a safety next season. T.J. McDonald’s contract is up and even so the rest of the safeties aren’t exactly great starters. Here are some safeties that could fall into the Rams lap around round two to round five range. 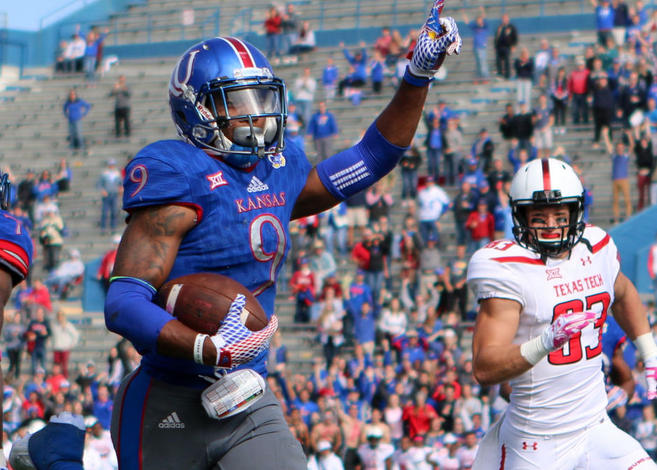 Anthony Smithson, the man they call Fish is a 5-foot-11 and 201 pound safety. I’ve watched Smithson a bit since I am a Kansas fan and one thing I love about Smithson is that when you watch him you notice he stands his ground against any and all competition.

Smithson was the Big 12 conference leader in tackles at 111 and he led the nation with 7.9 solo tackles. Now yes I know Kansas didn’t win a game last year and the lack of talent up front on the defense led to more opportunities for Smithson but that shows you right off the bat you are getting a sure tackler in this Jayhawk. One thing that can’t be understated he is a play-maker. Smithson shows excellent discipline and burst to the ball. He projects well to Free Safety which is the position the Rams still lack a true starter in.

His weakness is that he isn’t a burner and doesn’t quite have the recovery speed to make up for an occasional lapse in coverage. For Rams fans Smithson compares very well to former-Rams Free Safety Rodney McLeod. 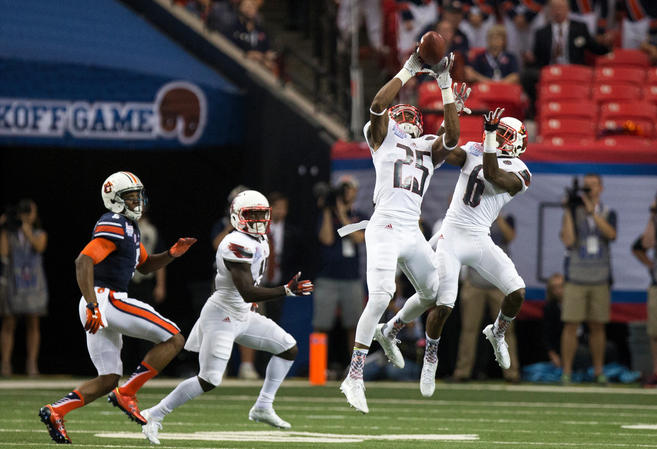 This safety is a flat out beast of a man. Harvey-Clemons stands at 6-foot-5 and weighs 212 pounds. He is considered a hybrid safety/linebacker and has said to have run in the mid 4.5 range in the forty-yard dash. He could seriously be a new breed of safety in the NFL. We see Kam Chancellor but he’s 6-foot-3 and that’s considered huge for the position. 6-foot-5 is just flat out crazy.

Harvey-Clemons has the kind of awareness you can’t coach and has the ability to make tackles in the open field. One thing that is eye-opening about him is the fact at such a crazy size he can move very well. He has very loose hips and shows ability to change direction. He has exceptional timing in jumping to intercept a pass and is a very aggressive player that will try to punch the ball out any chance he gets but, he isn’t perfect.

His weaknesses you can live with if you know where and how to play the Louisville safety. He simply will get beat by smaller and quicker receivers that’s to be expected but at times he has a hard time and bites on play-action. Harvey-Clemons needs to bulk up his lower body because it causes him to lose leverage with bigger ball-carriers and it will end up meaning a missed tackle or him getting dragged extra yards.

This is a player to keep in mind he was kicked off the Georgia football team due to his off the field issues. However, since transferring to Louisville he has been fully conscious of his actions and has stayed out of trouble.

NFL Draft: FCS Prospects to Watch During the...