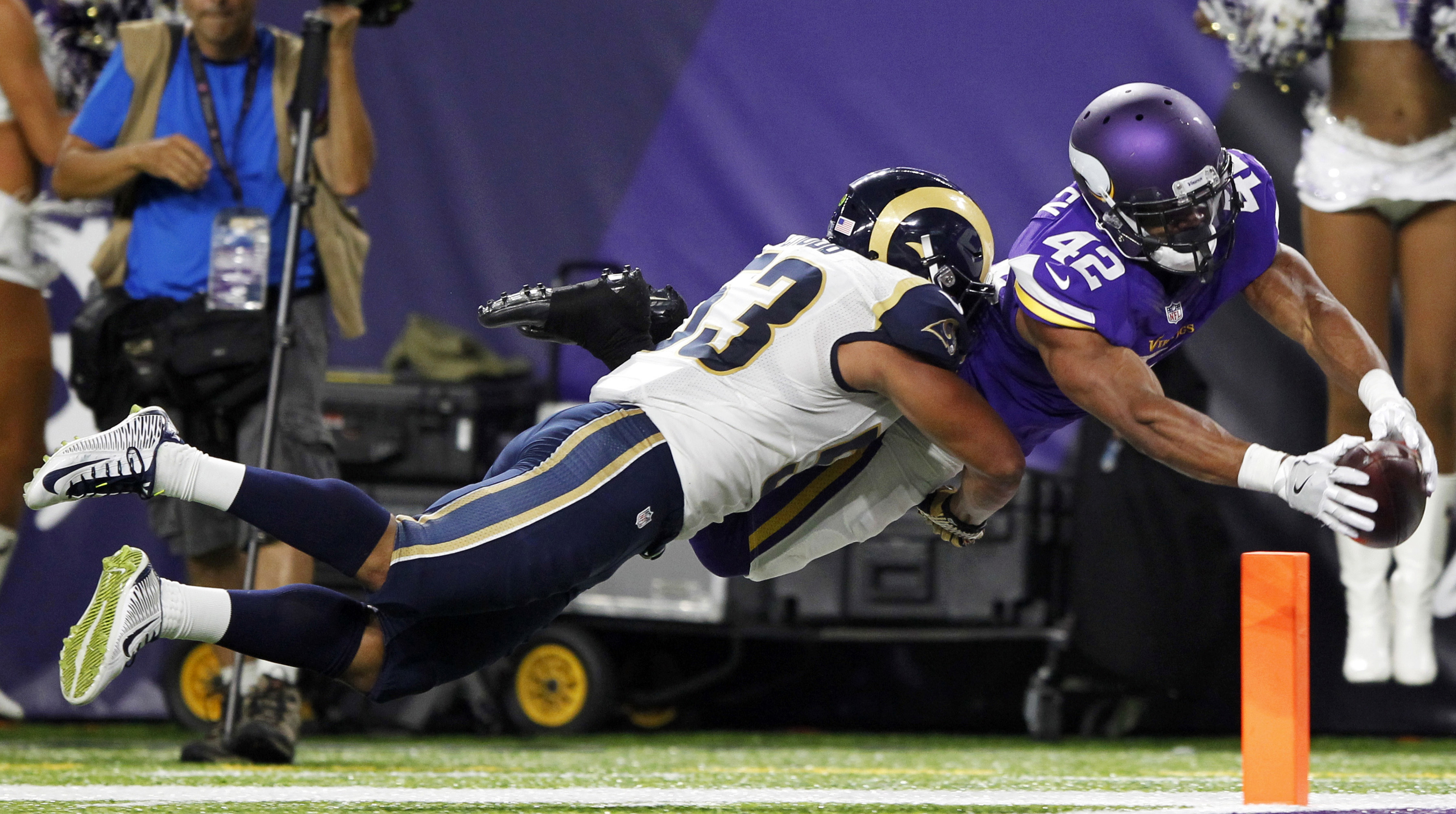 The Rams lost their first game as the L.A. Rams. The first cuts (down to 75) date is Tuesday and here is our updated roster prediction for the 53-man roster going into week four in Minnesota.

Terrence Magee, Running back – Perhaps the toughest position to cut down in because of the tremendous talent. Everyone at RB on the Rams has played well and I wouldn’t want to be the coaches to have to decide who stays and who goes. Since Chase Reynolds is their special teams ace I think he ultimately stays. Aaron Green played too well to not have been noticed by 31 teams and so I think as inconvenient as it may be to keep five running backs it might happen. I think Magee played well enough and will be on the Rams 2016 practice squad.

Austin Hill, Wide receiver – Now he is going to be upset but keep in mind Austin Hill was signed late in the offseason with his former college teammate David Richards. Hill worked extremely hard and somehow survived the first round of cuts. It should be considered impressive that Hill lasted this long and he will likely be the practice squad candidate over Duke Williams who didn’t really impress anyone.

Brian Quick, Wide receiver – Quick had a pretty dreadful preseason and while some may still be expecting the project to be continued onto 2016. That would go against Jeff Fisher’s 7-9 bull-s*** rant. Quick hasn’t done enough to make the teams in the past but still did. Now with some upside at the wide receiver position and size? Quick’s career as a Ram is done.

Mike Thomas, Wide receiver – You have to wonder if he is kept because he played so well on special teams. I think ultimately him not being able to catch the ball consistently will seal his fate. With Pharoh Cooper out week one the Rams would have to use their sixth receiver they keep at least a couple of times on offense. Thomas just simply isn’t ready and a year on the practice squad is needed.

Duke Williams, Wide receiver – Really disappointing to see a guy who everyone was raving about in camp to come out and just be really unappealing. That’s what I wrote last week and this week it still holds up. The Rams need receivers that will catch the ball and he simply can’t do that on a consistent basis. Williams like Thomas will benefit from time spent on the practice squad. However I think the Rams would be better off sending Hill to the practice squad over Williams. Bare in mind teams “blacklisted” Williams coming out of the draft so you know not many if any will give Williams a shot due to his past. The Rams should take full advantage of that and grab Hill and place his the practice squad in case a team wants him.

Justice Cunningham, Tight end – If the Rams could afford to keep four tight ends, I would expect Cunningham to be the fourth. He simply outplayed the rookie Hemingway and showed off his ability on special teams. He even almost blocked a punt. Cunningham will be a tough cut but the problem is that the position has been locked down since day one with Lance Kendricks, Cory Harkey and Tyler Higbee.

Temarrick Hemingway, Tight end – This is a disappointing newcomer to the notable roster cuts list. I had high hopes for Hemingway but he just isn’t doing much to make the Rams want to keep him. Again, another practice squad candidate. I think he is going to take over Justice Cunningham’s spot on the practice squad.

David Arkin, Offensive tackle – Keeping him on the roster this long showed the Rams may have been trying to decide between a select handful of players. I think they took Eric Kush over the latter and that means Arkin will be cut.

Isaiah Battle, Offensive tackle – He’s not making the roster and it wasn’t a good look giving up not only the last sack of preseason but pretty much the game losing sack at that. Fisher hates losing no matter if its preseason or not. Battle just isn’t getting any better and unfortunately it looks like the Rams wasted a pick on him. Practice Squad? Possible but, I think the Rams might pull the plug on the Battle project.

Andrew Donnal, Offensive tackle – He’s looked good in camp from what we have seen but in game he’s quite unspectacular. Donnal just isn’t strong enough to play inside as an offensive guard and when they use him on the outside as a tackle he just isn’t quick enough. Donnal could be on the practice squad.

Pace Murphy, Offensive tackle – He showed promise and played solid at the end of last night’s preseason game. However the Rams have too much versatility to need to carry Murphy.

Darrell Williams, Offensive tackle – Another disappointment, Williams seemed to be a lock to make the 53-man roster but after allowing five sacks versus the Broncos you can imagine he could be gone. Williams just looked awful that night whether he was playing with the flu or something that was just bad. Looks as though the last preseason game didn’t do him any favors, easy cut.

Ian Seau, Defensive end – This is not going to be one the fans agree with but thats fine. I think Ian Seau is a beast and has plenty of potential. What worried me throughout preseason is he wasn’t getting serious reps. He came in with the third-team and thats not a good sign. Morgan Fox had an unbelievable performance last night so if the Rams were debating keeping him or Seau I think Fox might have earned himself a spot. Fox has always played well but he just wouldn’t show up in the stat sheet. Last night however was a different story. The problem is will Seau make it on the Rams practice squad. A team could look at Seau’s tape and see a player that could be on a 53-man roster so its a gamble but if the Rams are able to put him on the squad it would be a steal.

Cam Thomas, Defensive tackle – This is the one cut I could be wrong about. I feel as though his size is being overrated by the Rams coaches. Thomas doesn’t get much push up front in fact when he was in last night against the third-team offensive line of the Vikings he looked completely ineffective. It doesn’t make any sense to keep Thomas when the Rams run a 4-3 and Thomas is a nose tackle built defensive lineman. Another thing, you know those big runs that teams were gashing the Rams with? A player like Aaron Donald, Michael Brockers, Zach Colvin, Morgan Fox and Dominique Easley would stonewall them but Thomas? Nope. Thomas isn’t athletic enough to make this 4-3 defensive line.

Brandon Chubb, Linebacker – A player who has really impressed me overall. Unfortunately Chubb had his work cut out for him. I do think however Chubb outplayed sixth-round pick Josh Forrest but I don’t see the Rams putting him on the practice squad over their sixth-round pick.

Josh Forrest, Linebacker – Forrest was average in preseason. He showed flashes of special teams and pass rushing potential. Forrest will most likely make the practice squad but he’s not likely to make the 53-man roster.

Nicholas Grigsby, Linebacker – You just didn’t see alot of Grigsby and many thought he would take over his linebacker competition. Grigsby was outplayed by every linebacker besides camp casualty Darreon Herring.

Cory Littleton, Linebacker – This one is tough because if it were me I would make sure to get Littleton on the 53-man roster. However the Rams are thin at cornerback and wide receiver because of injuries. Had that not been the case the Rams probably keep six linebackers and Littleton has a shot of making the roster. They do like him alot and I see him going on the practice squad.

Mike Jordan, Cornerback – Every time you watch Jordan he makes plays. He reminds me a little of a former Rams preseason corner that missed the roster in Trovon Reed who made the practice squad last year. Jordan has an NFL future in my opinion and if Troy Hill and E.J. Gaines can’t stay healthy we could see him in Rams regular season games sooner than later.

Rohan Gaines, Safety – He has played well on special teams but has really failed to make an impact on defense. Jordan Lomax seemed like a better option to keep but he was surprisingly cut in the first round of cuts.

Jordan Kovacs, Safety – Brought on as a late addition to the roster Jordan Kovacs has really worked hard to get down to this point. He is just barely going to miss this cut.

Jabriel Washington, Safety – Another player I really like Jabriel Washington is likely not going to make the final roster. He shows versatility as a safety and cornerback which would be useful for the Rams heading into the regular season pretty beaten up at cornerback. Washington had a fumble recovery in the Chiefs game during crunch time. He has looked good in game and will likely be on the practice squad.