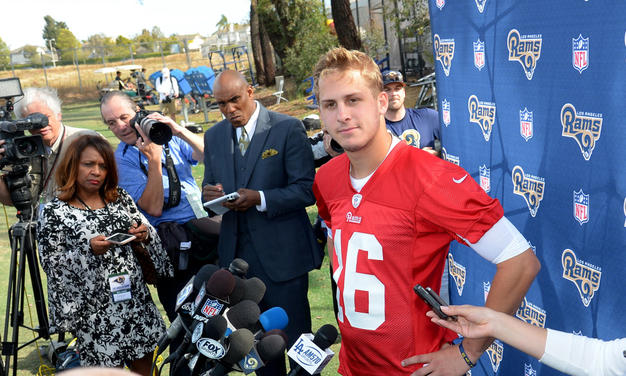 Hard Knocks is slowly coming to an end. While some weren’t very keen to the idea of the Rams being on the hit HBO series, it has been cool to see the behind the scenes stuff that goes on. Last night we got to witness the cutting players aspect so with that said, here are five takeaways from last night’s episode.

5. Jared Goff is still way behind

Every rookie is going to struggle, but has Goff has really struggled. Last night there was a point when the cameras and audio caught Goff struggling with play calling. He called the wrong play and then didnt know what he had called. The good thing here is that the game seems to be slowing down a little bit for Goff. He even said it’s starting to slow down and “feel like college”. That’s encouraging. Still, sitting week one may not be such a bad thing after all…

A few points in the last episode the cameras caught a couple of fights. While fights are going to happen, it’s in the way that they happened. An Olgetree cheap on Benny Cunningham then Gurley going after Ogletree on the next play. Fights are going to happen, but Lamarcus Joyner getting into a fight the week before doesn’t bode well. These things seem to make their way into games, and it’s because of that the Rams will get a good amount of unsportsmanlike conduct penalties or unnecessary roughness calls that end up costing them in games.

Last week the Rams locked up Tavon Austin to a four year extension. We got to see him sign the contract and share a cool moment with Jeff Fisher when he was signing the deal. Austin also shared a cool moment with Stan Kroenke before the team took the field against the Denver Broncos. It was nice to see how much staying a Ram meant to Austin. Hopefully he’ll be able to finish his career with the team.

2. Austin Hill Will Be That Player That Everyone Likes And Gets Cut…..

If you haven’t been watching the show, the cameras have been locked on Austin Hill and his family. Unfortunately for Hill, while he made the first round of cuts, the Rams are deep at the position meaning it’s only a matter of time before he is. He’s been a fun character to get to know which is why him getting cut in the next episode isn’t going to be easy for anyone to watch.

1. Jeff Fisher has Cut Every Player He’s Ever Coached

We got to see first hand the cuts being made. Strength and Conditioning Coach Rock Gullickson pulls the players aside in the weight room and tells them to go see coach, and from that point the player goes to Fisher’s office to officially hear the bad news. A lot of dreams came to an end, but hopefully they get opportunities elsewhere. This week was tough, but next week is going to be even more difficult.