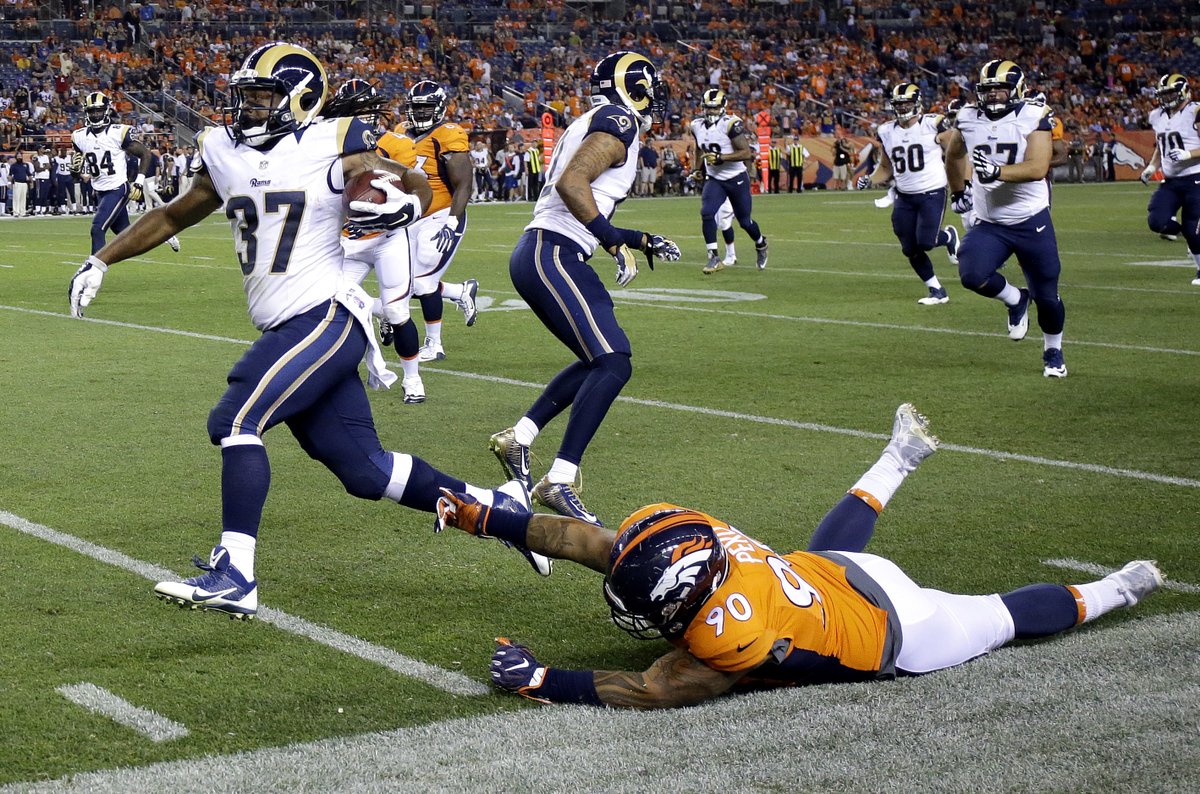 The Rams lost their first game as the L.A. Rams. The first cuts (down to 75) date is Tuesday and here is our updated roster prediction for the 53-man roster going into week four in Minnesota.

Aaron Green, Running back – Again this is tough but Green just hasn’t done enough to warrant a spot over a special teams ace in Chase Reynolds. If he does somehow make it expect Terrence Magee to be added to the practice squad but I don’t see it so it looks most likely that Green will be on the practice squad leaving one more year for Reynolds.

Brian Quick, Wide receiver – It’s looking brighter for Quick who caught all three of his passes last night but still is looking like a sixth wide receiver barely making the roster. I personally feel as though Paul McRoberts is playing too well to cut him for Quick. McRoberts has emerged and he seems to be the only one not named Spruce or Britt that can catch the ball.

Mike Thomas, Wide receiver – Thomas looked really good on special teams but on offense? He was atrocious dropping three passes on the night two were to convert a first down. Thomas is just not ready to play WR in the NFL and would benefit starting his career on the practice squad.

Duke Williams, Wide receiver – Really disappointing to see a guy who everyone was raving about in camp to come out and just be really unappealing. His drop to convert a 3rd and long was just inexcusable. They got a first down because he was hit late but the Rams need receivers that will catch the ball and he simply can’t do that on a consistent basis. Williams like Thomas will benefit from time spent on the practice squad.

Temarrick Hemingway, Tight end – This is a disappointing newcomer to the notable roster cuts list. I had high hopes for Hemingway but he just isn’t doing much to make the Rams want to keep him. Again, another practice squad candidate. I think he is going to take over Justice Cunningham’s spot on the practice squad while Cunningham becomes a full time member of the 53-man roster.

Darrell Williams, Offensive tackle – Another disappointment, Williams seemed to be a lock to make the 53-man roster but after allowing five sacks last night you can imagine he could be gone. Williams just looked awful last night whether he was playing with the flu or something that was just bad. Looks as though Isaiah Battle will make the roster by default.

Andrew Donnal, Offensive tackle – He’s looked good in camp from what we have seen but in game he’s quite unspectacular. Donnal just isn’t strong enough to play inside as an offensive guard and when they use him on the outside as a tackle he just isn’t quick enough. Donnal could be on the practice squad. I do however think it’s worth keeping Jordan Swindle over Donnal on the practice squad.

Ian Seau, Defensive End – Seau again for the third straight week continued to pressure the quarterback. He just is going against the numbers game. The Rams can’t afford to keep 10 defensive linemen. That’s their best position and they have needs elsewhere. Seau will be on the practice squad and the Rams will have to pay him more than the usual practice squad player gets to combat other teams swooping in.

Josh Forrest, Linebacker – It’s him or Bryce Hager as I said last edition… I am picking Hager still. I tihnk this is the year Fisher cuts three picks from this draft class because this team is just getting better and too deep to keep these guys. Forrest remains a practice squad candidate.

Mike Jordan, Cornerback – Jordan looks good in play but he just isn’t getting thereps his competition is getting. Jordan seems like a practice squad guy.

Coty Sensabaugh, Cornerback – I think a little less of this prediction and while I want Sensabaugh to be let go I think the Rams might be leaning towards cutting Marcus Roberson. We will see…

Predicting the Rams first round of cuts