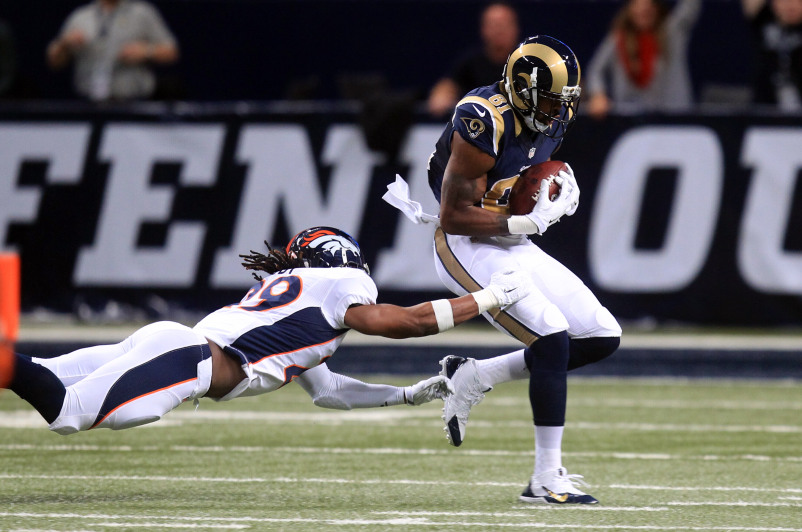 Later tonight the Los Angeles Rams will visit the Denver Broncos at Mile High Stadium at 9:00 PM for week 3 preseason football.  We will preview the game and also give some predictions for the Rams side of the game.

Where to Watch: CBS-2

What to Watch for the Broncos

The Broncos 2016 preseason has been dedicated to finding their quarterback for the year.  So far it looks as though young Trevor Siemian will be starting as he is today.  It has also become a rumor that the first-round draft pick, Paxton Lynch, may have passed over Mark Sanchez as the second quarterback who will get reps with the first team offense in today’s game against the Rams.

This game will be a great test for the Broncos’ starting offensive line as they will get to face the Rams defensive line at full strength as Robert Quinn will make his return to the field since the middle of last season.

Another good test for the Broncos will be their run defense as the Rams have seemingly ran over every team they have faced by running it down teams throats.  Overall, this game is about finding a quarterback for the Broncos and keeping the stout defense as healthy as can be.

What to Watch for the Rams

The Rams will once again start the game with Case Keenum at quarterback and then move onto Jared Goff who will once again get reps with the one’s. If Keenum continues his non flashy, consistent play he may just lock this starting job up for the beginning of the year.  One thing I will be looking for is if Aaron Green can play himself back into a roster spot as it seems as though his injury last week caused him to once again drop below Chase Reynolds on the depth chart.

The next biggest story for the Rams this preseason has been the sorting out of wide receivers, or lack there of.  If Brian Quick once again lays an egg it could be his last game or second to last game in horns and honestly it would be well deserved.  Another part of the offense that will be back is rookie tight end, Tyler Higbee.  Higbee has already shown that he is reliable and has become a favorite of almost every quarterback that has taken snaps with him.

The defense will mostly just go into the game trying to get reps without coming out injured.  Corner and free safety are still being sorted through but mainly at the depth positions as the starters, I believe, are already sorted out.  I still want to see Gaines continue his quality play and would like to see how the rest of the corners do against a very good Broncos’ receiver group.  This could be the game that the Rams regret the Sensabaugh pick up and recant on their deal with him.

This game will serve as the best litmus test the Rams could have asked for and although it is great to get reps against the defending champs, the best outcome is the Rams playing quality football and then getting the starters out so they can go into the season practically injury free.