Rams Deeper Than Ever At Running Back 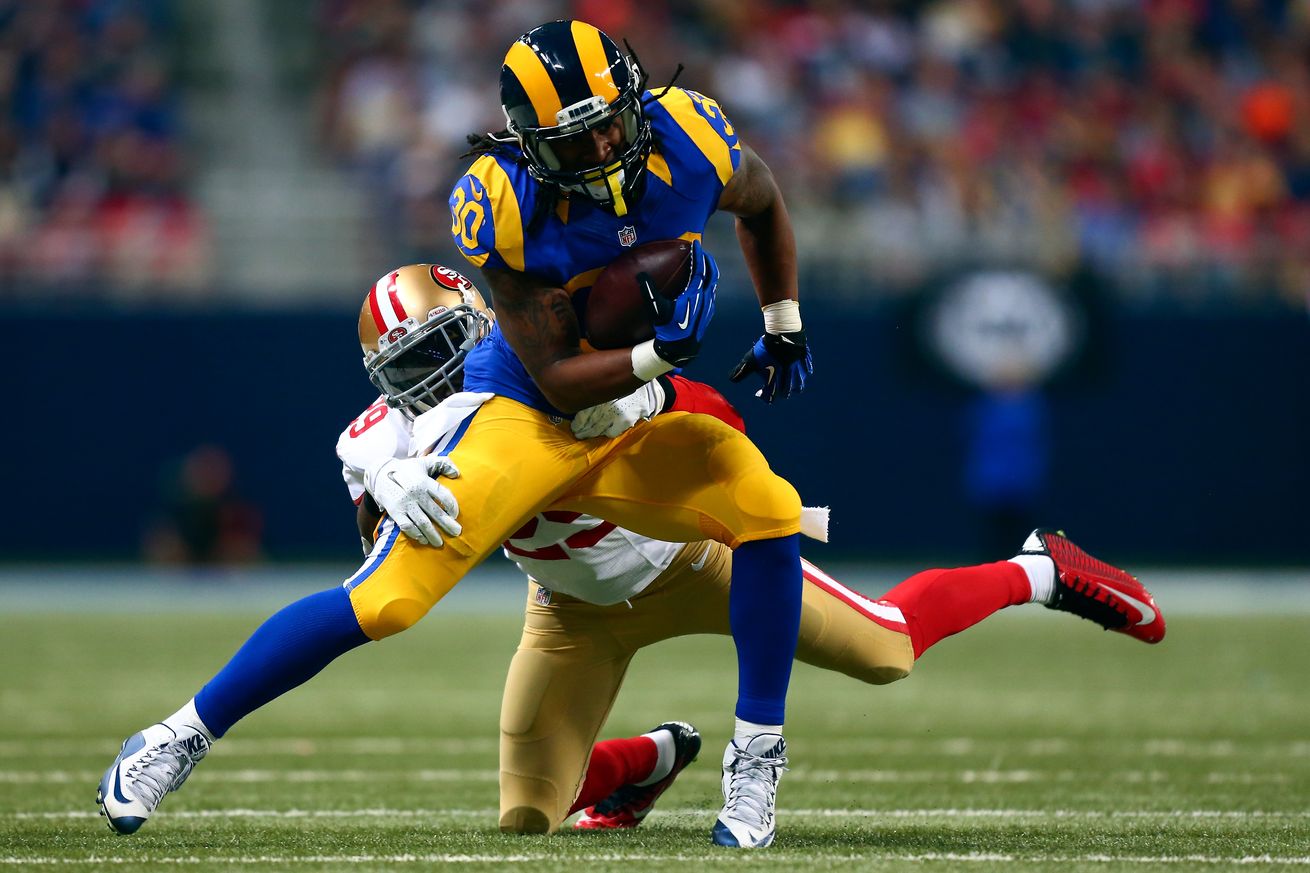 The Rams running backs seem to have gotten better and become a deeper group this season. With Todd Gurley likely hogging most, if not all the carries will they be able to utilize all of their backs?  Us at Downtown Rams have decided to look at each position group and we will start with the running back group.

What is there to say about Todd Gurley that hasn’t been said before?  Gurley still looks the part as the possible mantle holder of the best running back in the NFL.  If Gurley is better as some of said in camp after having now been over a year and a half since his knee injury.  With an extraordinary blend of size, speed, and vision Gurley could be the transcendent running back we haven’t seen since Adrian Peterson.  If the Rams can continue their strong run blocking as they have this preseason then we may well see Gurley take the rushing title and possibly even take the torch from incumbent, Peterson as the best running back in the NFL.  I know I’ll definitely target Gurley this fantasy football season.

Benny Cunningham has become much more than just a good kick returner. This preseason we have seen Benny use his burst and shiftiness to create positive gains and look the part of possible starter, if Gurley wasn’t there that is.  Benny will more than likely still return kicks as he has proven he is one of the best in league in terms of average.  With his running however, Benny has more than assured the Rams that they can give Gurley a rest during the season and there will still be a competent, dangerous runner in the backfield.

Perhaps the greatest surprise this preseason has been the emergence of Malcolm Brown and his play has certainly not gone unnoticed.  Brown has rushed with a nice combination of speed and power.  When there has been a hole for Brown he has hit the hole with burst and finished the play with nice power to deliver hits rather than taking them.  Brown was even able to show off his hands this past week versus the Chiefs.  Brown has certainly earned a roster spot this preseason and by the hints that Fisher has dropped about Brown’s emergence it seems it is already a foregone conclusion.

Chase Reynolds has shown in the past that he has a value to this team and in particular as a special team’s ace.  However, this preseason Reynolds has not played up to his standard on teams and with little value anywhere else on the field, having never taken a snap as a running back, this may be the end for Reynolds if he can’t get it turned around.  Reynolds won’t be cut in the first round as he will be given the opportunity to earn his spot back if in fact he has lost it.

Aaron Green is my personal favorite of the possible roster bubble players due to his quick feet, pass catching ability, and pass blocking ability.  Green could provide the Dion Lewis or Darren Sproles type production where he could be a package player and possible special teams contributor.  Green played a good game versus the Cowboys in preseason week one but was inactive versus the Chiefs.  If Green can in fact play this upcoming week, something that looks probable, he could possibly take Reynolds spot if Reynolds continues to disappoint.

Terrence Magee is in a bad position for a roster spot due to the exceptional depth in front of him.  Magee did not play terrible but failed to impress in his extended time on the field.  Even with large holes being opened up by the offensive line, Magee failed to explode through the hole and arm tackles, making possible large gains only small gains.

Overall this running back group is very deep with a variety of flavors. With possible the best back in the league backed up by quality depth, the Rams could conceivably use less Todd Gurley and extend his career. If the Rams choose to keep three it almost certainly would be Gurley, Cunningham, and Brown at this point.  If they continue with keeping four as the Rams did last year, I would expect Reynolds to still be the one who makes the cut but only if he turns his play around and hold of Green who seems to make plays when he’s on the field.