10 Takeaways From Rams Win Over Chiefs 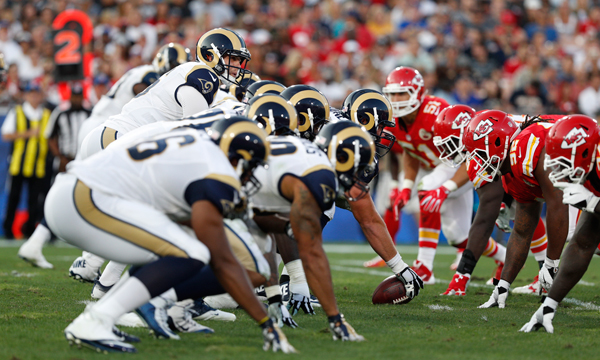 The Los Angeles Rams got a win in their second preseason game at home, 21-20 over the Kansas City Chiefs. It wasn’t a pretty win, but there were some things, good and bad, to take away from it. Here are our ten takeaways from Saturday night’s game:
1. Case Keenum is Clearly the Starter
Keenum is clearly the starter for this team. In three red zone trips, he has lead the offense to three touchdown drives. When Fisher said Keenum is still clearly had of Jared Goff (We’ll get to him later), he meant it. Keenum went 4/5 for 53 yards and had not one, but two touchdown drives. With it being the third preseason game, Fisher may announce this week that Keenum is the starter for week one.
2. Starting With Gurley, Rams Running Backs Had a Good Night
The night started with Todd Gurley rushing the ball four times for 20 yards and scoring the team’s opening touchdown. Benny Cunningham then took over and rushed the ball four times for 38 yards. Finally Malcolm Brown and Terrence Magee combine for 18 carries for 84 yards. Between those two, Brown had the majority of the workload with 12 carries for 68 yards.
The Rams may be without Tre Mason, but they certainly aren’t missing him. They have a good one-two punch with Gurley and Cunningham and then Brown had us reminiscing of Steven Jackson with his punishing running style and number 39. Brown also made a nice adjustment on a pass thrown by Goff to the wrong shoulder to score the game winning touchdown.
3. Pharoh Cooper and Tavon Austin Will be A Nightmare For Defenses
We already know what Tavon Austin can do with the ball in his hand, but last night we got a little sneak peak as to what Cooper can do with the ball when he catches it. Groh designed a great pass play in bunch formation that had two of the receivers block while Cooper catches a screen. That gave Cooper the one on one matchup and he’s going to win that nine times out of ten. Cooper scored to tie the game up at 14.
4. Jared Goff Looks Lost
Once again it wasn’t the hottest start for Jared Goff. Goff started off with a dropped pass by Brian Quick and then tripping on his own and losing a fumble. He fumbled again later on, but it managed to go out of bounds. The stat line shows that he went 8/12 for 82 yards and a touchdown, but it doesn’t tell the whole story.
The offense runs so smooth with Keenum and then has no rhythm with Goff. We’d like to see him start week one, but the take it slow approach may be the better move. Right now, he’s just not ready.
5. Bradley Marquez Hurts Ankle
There is no official news yet, but it doesn’t look good for Bradley Marquez. Marquez got his ankle twisted pretty bad and had to be carted off the field to the locker room. Marquez being hurt would open things up in the wide receiver competition, but that’s never not how we would have like it to go. Best of luck to Marquez, hopefully he’s ok.
6. Brian Quick and Duke Williams Need to Step Up
Brian Quick needs to start playing like the veteran that he is. He ended with two catches for 27 yards, but he also had a few dropped passes. It’s now or never for Quick and he needs to play like it.
Duke Williams on the other hand has yet to really do anything in a game. He may be talented, but he’s not outplaying any of the wide receivers at the bottom of the depth chart. If he wants to make the roster he needs to start showing us why he deserves a spot.
7. The Rams Secondary uhhh…Needs Some Work.
We were hoping that last week may have been a fluke, but it wasn’t. The secondary was terrible once again against the Chiefs allowing Smith and Foles to combine for 27/34 for 270 yards. Smith missed just three passes in the first quarter and Foles started out by completing his first six passes. Trumaine Johnson got beat deep by Chris Conley, Coty Sensabaugh can’t cover anything, and Lamarcus Joyner blew a coverage on a touchdown and then decided it would be a good idea to get ejected.
The defense looks good when Mob Squad is raising havoc, but when they’re not, the secondary gets shredded. There are some positives with this group which I’ll get to, but for the most part, they need a lot of work.
8. EJ Gaines is Back!
This is what the Rams needed. EJ Gaines looks to be back and playing like he did before the injury. He was shadowing his receivers very well, and at one point he saved a touchdown by coming off his guy to cover Sensabaugh and break up the pass himself. The former Mizzou cornerback ended with four tackles. Now we just need him to stay healthy.
9. Young Guys Playing Well
Players like Cory Littleton, Mike Jordan, Troy Hill, and Josh Forrest seemed to be all over the field last night. Littleton and Forrest each finished with a couple of tackles and Mike Jordan and Troy Hill looked good in the secondary. The Rams make the first round of cuts this week, and these guys showed why they deserve to be here a little longer.
10. We’re halfway through the preseason!
Just three more weeks until we get our first actual NFL action. We’re officially halfway through the preseason and for the most part, the Rams have stayed relatively healthy. On August 30th the Rams will have to trim the roster down to 75 players before cutting it down to the final 53 on September 3rd.
A lot can still happen in these final two weeks. A player like Duke Williams still has some time to make some plays in a game to show why he belongs on the roster. We’re just getting started and the next two weeks should be exciting.
0 0 votes
Article Rating

Four players who took themselves out of the 1st cuts conversation