Five takeaways from the second episode of Hard Knocks 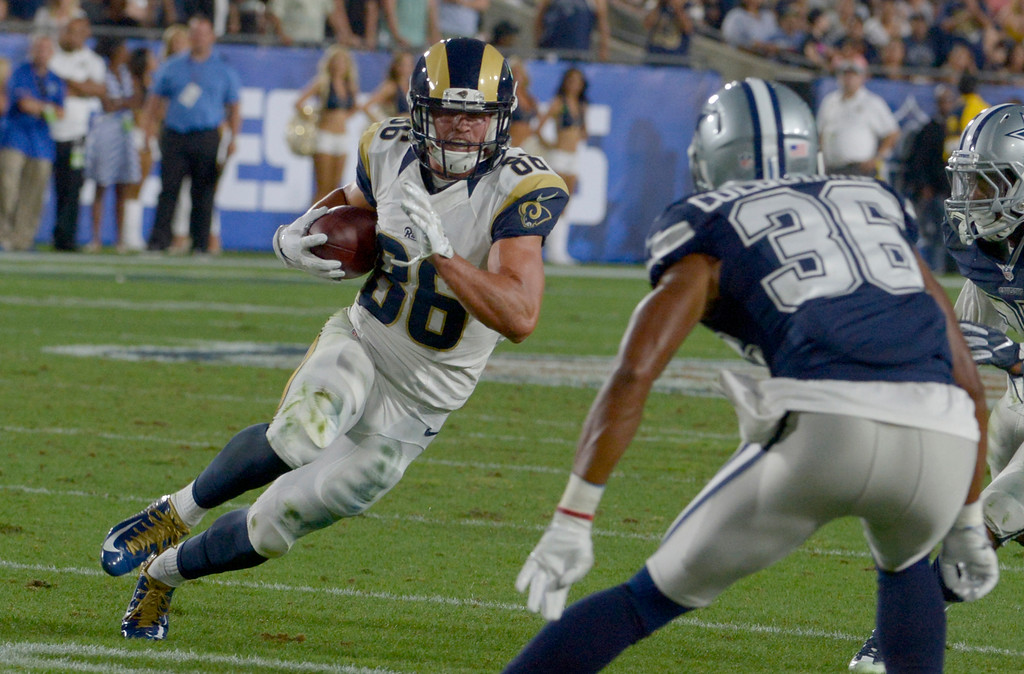 This week’s episode of hard knocks gave us the inside look during the first game back in Los Angeles. There were some comedy moments, “oh my god” moments and course a dreaded tear-jerker. Here are my five takeaways from the August 16th episode.

1. Brian Randolph’s ascension in camp was ended in tear-jerking fashion

This one hit home for me. As you may already know I have been in contact with Randolph and he is a class act. Hard Knocks really started to showcase him in episode two and unveiled his nickname to be “rhino”. The show was getting you pumped up to watch him fight for a roster spot as coaches on the sideline were starting to take notice of his play. This even made you wish somehow things would turn out differently on the show. Unfortunately that wasn’t the case…

Randolph’s torn ACL was brutal and it tugged on my heart strings personally. He has been through the process of rehabbing an ACL tear before and should be back but, it’s very hard to watch someone put all that hard work in and watch him lose it all in a matter of seconds. We wish you the best Rhino!

2. Jared Goff is looking confident and growing up fast

The Rams franchise quarterback is starting to really open up to everyone. His personality seems pretty much down to earth. However you started to see him become a leader and tell his guys in the huddle how he was going to do things. There is a point in the episode coach Chris Weinke tells Goff that he liked seeing him tell one of the offensive lineman off for trying to hurry him.

Goff is getting all the spotlight and that is not a surprise, or at least shouldn’t be to anyone. The fact of the matter is when you compare last week’s episode to this one Goff already looks much better. While obviously it could be the fact Hard Knocks had edited it to make Goff look better. It’s still a big deal you see a quarterback that wants to be great and is dealing with many new things the NFL game has to offer.

During this episode we watch as two former teammates Austin Hill and David Richards sign contracts with the Rams. This was cool because we already saw reports that the Rams signed Hill and Richards and the show even showed which looked like a pretty flawless workout for Hill.

Right off the bat Hard Knocks starts trying to push Hill’s story by showing his wife and child at home. During the game versus the Cowboys they show a visually upset Hill. He wanted to at least get one rep but the coaches had other plans. Now with the newest camp darling Nelson Spruce going down with a sprained knee it looks as though Hill should get some reps this Saturday versus the Chiefs which is a show storyline to watch.

4. Speaking of Nelson Spruce, he has apparently become an overnight fan and team favorite

If you thought Saturday was exciting just watching from home on ESPN, you really got a dose of what the on-field environment was during that game. Spruce was shown making catch after catch from second-year quarterback Sean Mannion. Spruce’s production on the field spoke volumes for the first-string players who started a chant that was practically contagious “Spruuuuce”. Kenny Britt even offers the rookie wideout to go out for dinner on him.

There is no doubt Spruce was impressive and I have been a fan since he came into OTAs but it is a drag that he is injured. The way Fisher talks about him makes it sound like he could definitely make the 53-man roster but nothing is guaranteed with a player like that. The only thing that is guaranteed is that if Spruce doesn’t make the roster, he won’t be in horns because there is no way he makes it on the practice squad after his exposure on Hard Knocks.

5. Ian Seau broke out and made a name for himself

If you didn’t see the preseason game and watched hard knocks then you must have been surprised when coaches and Jon Gruden alike were talking about Seau and how he could maybe get a sack on Saturday. Well he did and would have had another if Cowboys quarterback Jameil Showers didn’t make such an incredible play to stay up on his feet after Seau tried to throw him down.

Seau is pushing his way onto the roster and the storyline that has been surprisingly quiet has been Seau. It looks as though that its finally coming out and Seau could become a household name soon. The video with Junior Seau watching his nephew Ian was surreal. Seau’s attitude is also something to admire how he respects his uncle Junior and believes that he was great but he wants to be known as his own person and follow his own path.

What did you guys think? Drop a comment below!